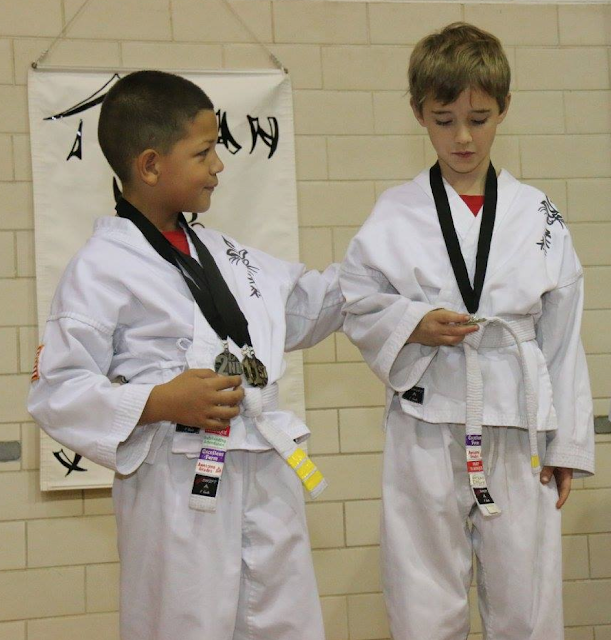 I'm slightly behind in my posting. I've been busy doing I don't even know what. When I sit down to write, I'm off in la la land.

The end of last week I got a cold. It was only bad for 2 days. Since then I've been tired, and feeling out of it. I know day light savings is a part of it.

The boys had a Ju-Jitsu tournament this weekend.

All the other boys with the same rank as Mica didn't participate this time around. Mica was pretty upset about this.

Why was he upset?

Because he has a chance in winning matches with them. Instead he was paired up with other boys that also have a yellow belt, but more stripes. They've been at it longer. They are from a different Y, so Mica was unfamiliar with their strength, defense, and moves.

On top of it all Daddy was a judge. He had to make the decision that Mica didn't win those matches.  Thankfully Daddy is a fair judge. He didn't let Mica win just because he's our son.

Mica was crying. Yes I felt bad for him. I also thought: This is a good life lesson. Mica sometimes gets into the 3rd grade, "I'm great at everything!" mode. I'm not saying that I want his confidence crushed; I just don't want him to think that he is the smartest, best boy on the block. A perfect ego can be just as dangerous as a low self esteem sometimes.

I did my best to comfort Mica, but also told him that life isn't always fair. We have to pick ourselves up to learn things out of what has been given to us. If anything - that day's lesson proved that Mica needs to work harder to win the next time.

Mica lost in the Samurai Square Push, and Mount. Fast forward to the last match: It was the back defense. Someone has to go after your neck, while you spin, and kick to keep them away. Mica won 2nd place.

He thought he wasn't going to get a medal, but did. 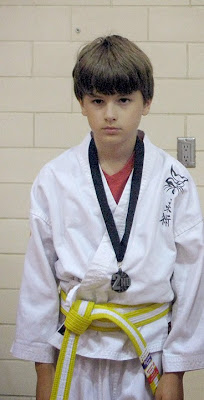 On the other mat Isaak was doing the same things as Mica, only with his age group, and similar rank.

He started out with warm ups. Isaak so badly wants to do the splits. Not too shabby! 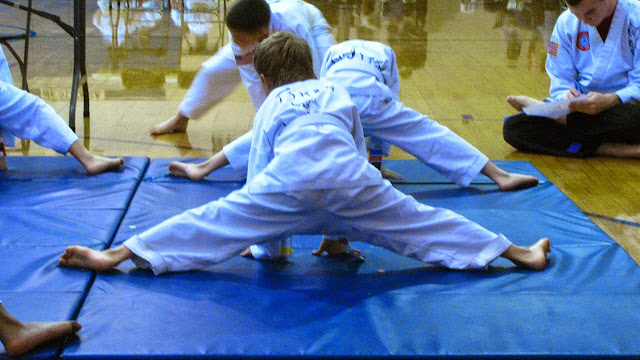 He didn't win the first two either. He wasn't as bummed as Mica, but was bored. He kept making bird noises with his mouth. 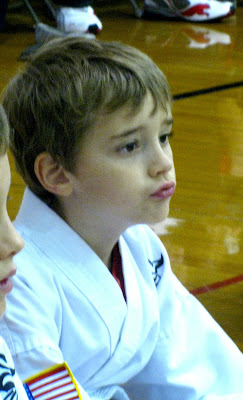 Isaak won in the back defense (the last match). He won 1st place. Mica was mad that even his brother beat him. I said, "He didn't beat you. He's in a different rank." It's a maturity thing that Mica will have to get past.

Instead of Isaak being mad for not winning other medals, Isaak was excited for winning the medal he won. 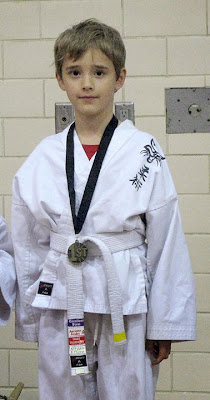 Instead of working hard last night in practice, the boys got a history lesson in Ju-Jitsu. I to learned a thing or two. Jiu-Jitsu is Brazilian, and Ju-Jitsu is Japanese. "Ju-Jitsu" means, "Gentle Art". Sensei was telling the kids that they have to implement respect and manners into their daily life; just like they do at Ju-Jitsu. He also told the kids where he learned Ju-Jitsu, which is Banini South Africa.

Right after class Isaak goes up to Sensei and said, "We should call you Mr. Black Skin." I thought I was going to die. Thankfully I think Sensei didn't hear Isaak. He was busy talking to someone else. If he did hear him, he didn't say anything. I certainly heard him. I know kids say things. I said, "Isaak he is Sensei to you. Never call a person by the color of their skin! Do you hear me?" Isaak nodded out of shame. I said, "No one says to you, 'We should call you Mr. White Boy with big eyes.'" Somehow that didn't sound as bad as, "Mr. Black Skin." I know he got the point.

I kept thinking about how Sensei just got done talking about respect and manners. Then my boy goes up, and says something offensive to many.

In Isaak's defense Sensei wears black clothes, which does make him appear that much more darker. 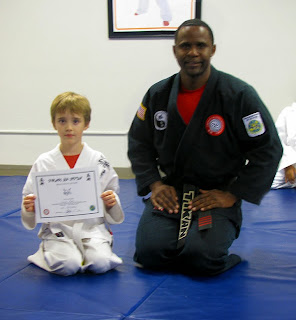 When Sensei gave Mica's class the lesson one kid said, "When are we going to do something?" Referring to the fact that they weren't kicking, rolling, punching and so on. Mica piped up and said, "We are doing something...We are exercising our brains." Yay Mica got that history lesson.

It really is great that he got paired with someone he was unfamiliar with. You're right, he did learn a valuable lesson. Sometimes things don't go the way we want them to and we just have to figure out a way to make it work.

I am very proud of both of them :)
So happy that they are learning so much!

I think it's important for them to know that there will always be someone better than them in different activities. They'll face it their whole life, so might as well face it now ;-)

I checked on Pierce's shirt (I got it at a yard sale) and the brand is Shaun White. I think they may carry that at Target?

He did learn a valuable life lesson. I hate the everyone gets a trophy attitude we have going on lately.

And I hate to admit it, but I cracked up at Mr. Black Skin. Only because kids sure do know how to embarrass the hell out of their parents.

Very valuable lessons for both the boys to learn, and I commend you for letting them face the fact that we can't all be great at everything all the time. They'll be the stronger for it.

And, oh boy, kids seem to have the ability to zero in on what will embarass parents the most!

It's amazing how much they can take away from one lesson or one tournament. Sport doesn't just train the body, it indeed trains the mind and heart too :)

Mica looks like he's still sulking about missing out on other medals ;)

Also, of all the new blogs I've visited tonight, this has been my favourite :)

These were important and valuable lessons to learn. A good growing experience! Have a wonderful weekend :)

Congrats to them both on their medals. I understand your oldest boy's dissapointment... but you're right those life lessons are important.

I think it is good that kids learn they can't win all the time. That should just make them try harder the next time.

I think respect and manners are two words missing in a great many vocabularies these days (kids and adults). I love anything that teaches people to have more of both.

I'm continually surprised by all the lessons kids can learn from sports. It's good that they can learn to cope with disappointment now instead of shielding them from it.