I have an uncle that's shy. For a long time I was unsure how to read him. He's nice, but given the moment he'll go downstairs, when everyone else is upstairs. I just always thought he just didn't like to talk a lot. I think shy people are often misread.

When Mica was downstairs once I noticed he was cuddling with my uncle. It sort of threw me for a loop. 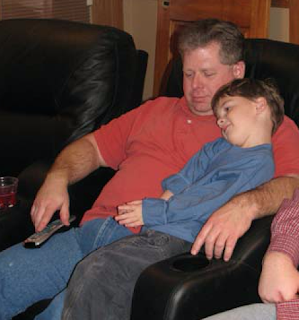 Mica has a way of getting quiet people out of their shell.

A few weeks ago we went to La Festa Italiana. It's full of food, music and fireworks. We met my friend and his partner there. I've known Mark since we were in middle school, and was friends with him from high school on. His partner Andrew is like my Uncle Steve. Andrew wouldn't disappear to be in a room by himself. He's still pretty shy.

Mark and I were chatting up a storm. I haven't seen him in awhile. I looked across the table, and there was Mica and Isaak chatting Andrew's ears off. 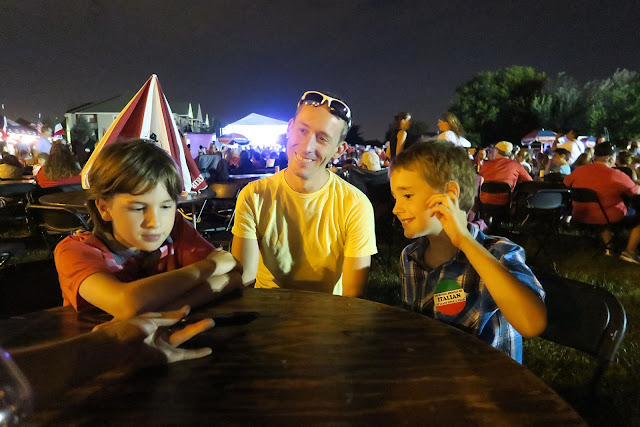 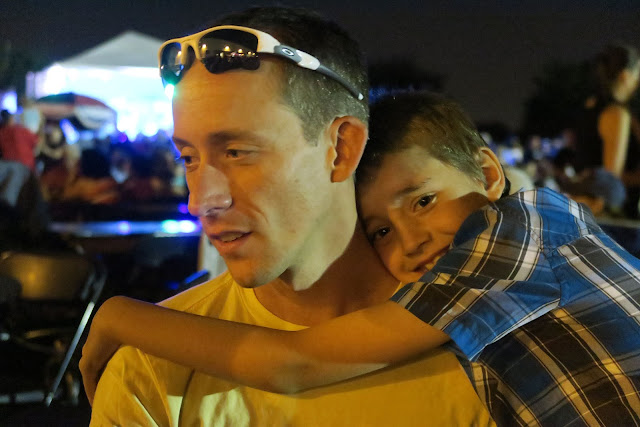 What were they talking about? The Batman game that they know Andrew has on his Wii. They were telling him all about Batman 2 they have on their DS. I'm sure they told Andrew way more than what he wanted to hear about the game. - Knowing my boys.

Do you think shy people are often misunderstood?

I once knew someone else that was overly shy. A lot of other people took her as stuck up. I kept thinking, I know her. She's not stuck up. She's just quiet. Sometimes shy people have more going on in their creative brain then other people. There are times where I didn't know if I should approach a shy person with conversation, or if I should let them be in their quiet and comfortable world.
Posted by An Apel a Day at 1:56 PM

Most introverted people are that way because they are uncomfortable trying to converse with others. Sometimes they run into someone they feel at ease with, and then they are different people.

That picture of the boys with Mark's friend at the outdoor table was a really good one. Looked like pictures you see in National Geographic, with all the light and color shifts.

Jason's uncle is like that. He hates going to gatherings where there will be more than a handful of people he knows because he's not fond of socializing.

Chris is very shy and will just sit there and not talk sometimes. I tell him that he needs to muster something up because it makes him look like a jerk.

Hahaha my son is the same way. Constant talking / chattering. I like it. :)

I think some people are shy and are read wrong, but there are some that act shy and are just weird. lol, i am a talker, but as i get older, i have my moments when i have nothing to say .

I think shy people have an easier time talking to kids