What’s the Best Job You’ve Ever Had?

I'm answering the question "What’s the best job you’ve ever had?" from Michael's blog - A Life Examined.

My first liked job is babysitting. I babysat a kid that now has a kid of his own. He was easy to babysit. I enjoyed coming up with creative things to do with him. His mom had a rule, "No eating in the living room." The rule was only set in place because she didn't want food to get on on their carpet. They rented, so naturally that would become a deposit that she wouldn't get back. One day I brought over a box of plastic trash bags. We put them all over the floor, and had a picnic in the living room. Another time we set up a volley ball net (which was a line of shoes that went across the floor), and played volley ball with a balloon. I didn't get paid a lot, but I liked my job.

My second liked job is working at a window blind store. I was their graphic designer for a period of time. I worked on the full catalog when I was there. I liked the people. Many of them were from Iran. They were nice to me. I taught one guy there how to speak some English. I sat with him on the bus. There was a time I needed sawdust. I asked him for some. He didn't understand what I was asking him. I motioned sawing, and pointed to dust. It took him 3 weeks, and he came back to hand me sawdust, pictures of furniture he custom built to show me, and an invite to his house for dinner - thanking me for teaching him some English. I never went to his house. It was an odd time in my life. I had no car. I took the bus and subway everywhere I went. I would have stayed there had I known they were going to give me a raise, and ask me to stay on. They let me know all that too late. We were already packed up, had the truck ready to move, and my family would have been heart broken if I didn't make the trip back to Nebraska.

My third liked job is the one I have now. I love teaching students! There just something so great about seeing light bulbs go off when you're talking about something. I like my fellow co-workers most of the time. I kind of think of co-workers like I do family members. You get along with them most of the time. Getting along with them all the time is unrealistic. I get to work on fun projects at times. Many of you read this summer that I worked on a poster for the school. My boss' wife drew the characters, but I spent much of the time coloring them in. In the process of working on the poster they decided that they wanted each animal's body to be finished. It was quite a project, but more fun and rewarding than a raise. It's busier than I like. I enjoyed being creative, and getting paid for that. It's kind of hard to show. This is as big as a door. I'm not even joking. I took a photo of it. It says, "Wear Many Hats...Imagination...Learn Many Things". 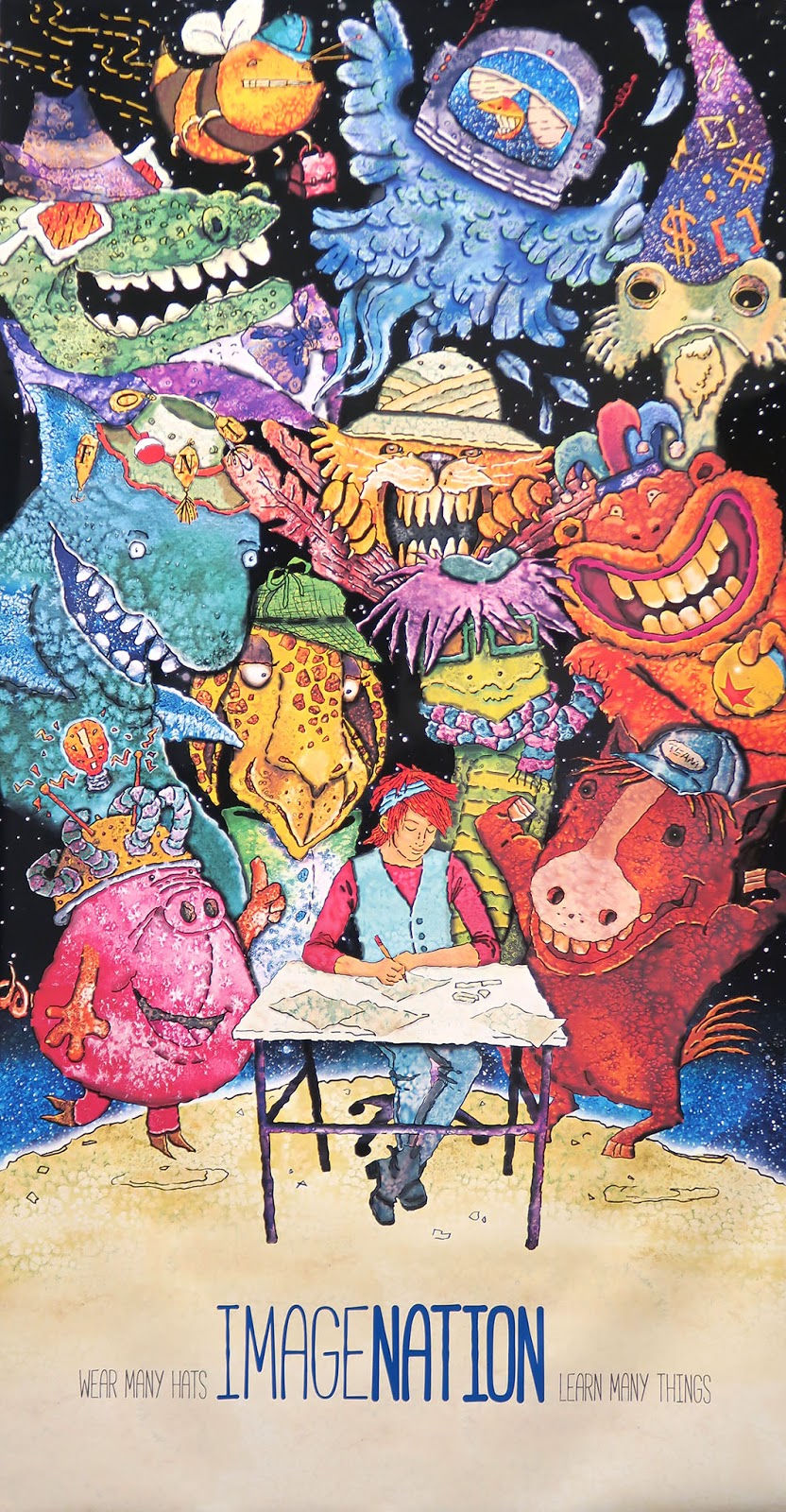 Here's their little stands that are at career fairs: 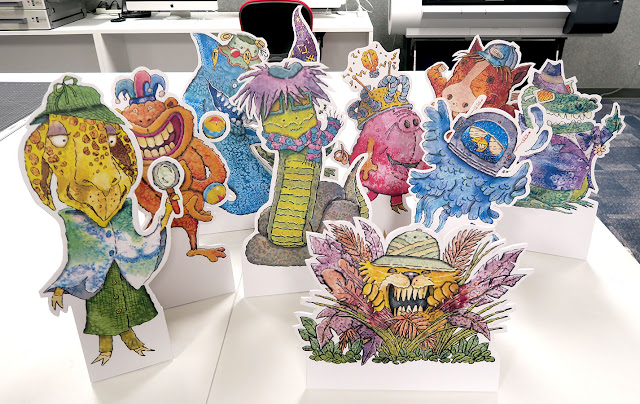 Of course being a Mom is the best reward.

Your posters are awesome. Working with kids/teaching is the most rewarding "job" I've ever had.
Play off the Page

That is a super cool poster! Teaching is one great job and so is being a mom.

Wow, I can't believe you designed those characters! They look awesome. I like how enjoyment of the job seems to come before financial reward for you :)

Being a teacher would be a wonderful job. I wanted to be a teacher when I was younger. Nurturing kid's minds is really rewarding.

Those characters are cool! And that poster is awesome. So colorful and imaginative.

You are very creative. I can see why you enjoy working with kids and helping others learn. I raised kids, but I don't know that I'd want to take care of other people's kids (other than my grandchildren) or teach young kids. My wife teaches kindergarten and I don't envy the work she has to do, but she seems to really enjoy it.

Arlee Bird
A to Z Challenge Co-host
Tossing It Out

Love the poster!!!
My favorite job is being a mom... of course :)
The next one?? When I was a student caller... recruiting people to come check out our college campus.

That's really cool. I think, like me, you enjoy jobs where you get to help people and express a bit of creativity.

Your posters are always so amazing! I've only had like 4 jobs and hated them all. I guess I'll say KFC though, since that's where I met Jason, so it will always have a special place in my heart.

I worked at a bakery when I was in high school and that was by far the best job I Have ever had. I loved all the treats!!

my goodness...your poster is amazing, Alissa. Great work of art indeed :). I love my job now..although being a diplomat entails many stresful portfolios, but I really enjoy the environment and many posts I have been so far. My next favorite job is radio announcer! I was working in the radio for 6 years and loving it! Really wish I could go back to that time again :)

Love teaching my blind students. It is always an interesting adventure.

WoW Alissa. You do such good work. You ought to market your talents.