It snowed for the first time on Friday. Just enough to coat the grass. It dawned on me that I had not checked to see if the boys had winter boots that fit. As much as I'd love to get them boots for Christmas, I need them to try shoes and boots on.

Mica's fit just right, and were slightly big for Isaak. We decided to give Isaak Mica's boots, and get Mica new boots.

Isaak has this new thing were he jumps instead of walks. It shouldn't annoy anyone. He's just having fun, but somehow it gets on all the rest of our nerves. After the 10th 20th time of telling Isaak to stop jumping around, and to just walk Mica decided to take Isaak's jumping into his own feet. He kicked him!

I looked around and said, "Here try these shoes on. You kicked him. You have to try these Dorothy shoes on." So instead of loosing a privilege he had to try on red sparkly shoes. For the record he only wore them for a minute. 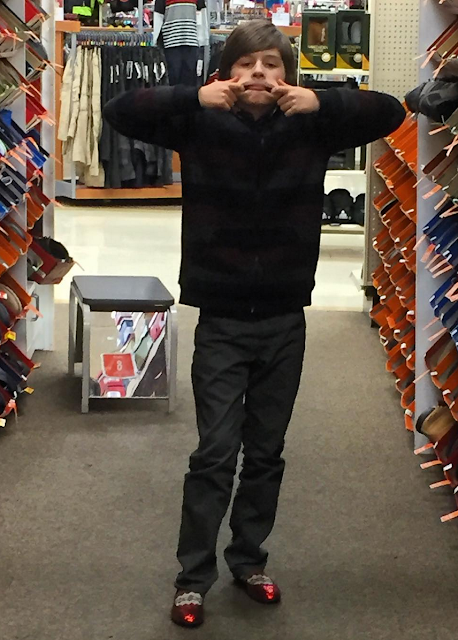 We did find boots. Our go to place for shoes and clothes (Kohl's) for the first time failed us. They need better in between sizes from boyz to men. I would have had to get Mica neutral girl boots. When I texted Travis a photo of the girl boots on Mica, Travis asked if they were for me? ShopKo has Payless inside it. That's where we found men's boots that were small enough. All the way home I said to myself, "There's no place like home!" 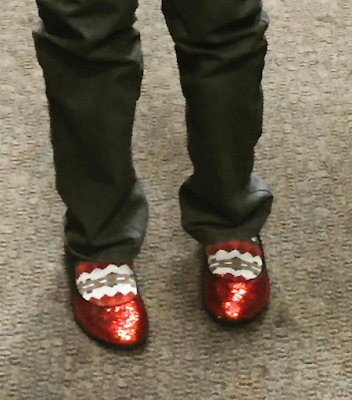 Glad we don't have a huge need for boots here. Lol at the Dorothy shoes

The OZ shoes are hilarious! Looks like he was a good sport about having to wear them though!