He likes to compare himself to other kids in class, which is normal for that age. I don't want to hear about how Joe forgets his homework all the time, and that it's no big deal that he forgot his homework just this once.

When he did his homework the next night it took him more than a few hours to do it. He's learning division, and it's something that is difficult for him. Math has always been his weaker point in school. With reading, history, science, and art he excels. Of course that week they had a sub on Monday and Tuesday. Mica just didn't get what he was doing.

He still uses touch points with math, and hasn't really learned his math facts like he should. I had this problem as well. Travis was one very frustrated parent.

Travis decided to have a conversation with Mica's teacher. His teacher said, "Everyone knows Mica is one of the top ones in class, but he doesn't ask questions when he doesn't get things." Travis said, "That's Mica. He thinks he knows everything, and is too proud to admit he doesn't know something." He told her that Mica still uses touch points to do his math. She said, "You mean to tell me that he doesn't do his flashcards every night after his homework?" Travis said, "He's supposed to be doing those every night, isn't he?!"

Travis confronted Mica about his flashcards. Mica said, "I figured I'm one of the best in the class. I really didn't NEED to do those flashcards." Cocky! I hate that his class has labeled him as a smart kid. Whenever we see the Special Smarty Pants Teacher she says, "Your boys are so smart. I just LOVE working with them!" That doesn't help with Mica's cockiness! Isaak's smart, yet humble. Mica's smart and cocky!

I always tell Mica that I went to a Special Smarty Pants Teacher to; only mine was to get extra help to try and get smarter. Yep I was in the dummy classes. I begged to move up to be with my friends that were smarter than me. I did not test well at all, I always did my homework, which put me grade wise in the A and B range.

We've told Mica time and time again that we all have our strengths and our faults. I explained that everyone gets things at different times. I've also told him that in the future girls do not like guys that think they are better than everyone else.

Mica had his first coding class at the library. I asked him how it went. He said, "Well I coded some Minecraft, but I thought I was going to code a website." It was one of those moments where if I was drinking water I would have choked from laughing so hard. He was there for one hour! 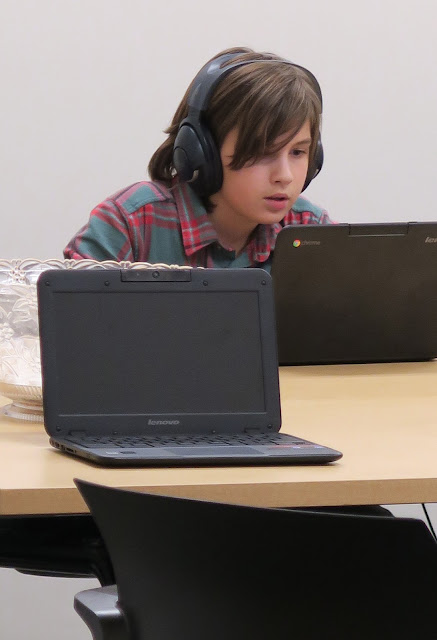 I'm happy that Mica is confident. I don't have to worry about building him up. I'm glad he's excelling in school. I often wish he was more humble though.
Posted by An Apel a Day at 3:53 PM

Allison pulls that "everyone is doing so and so" too. She wanted to wear leggings to school one day and I told her it was in the handbook as not acceptable. "but everyone else is wearing them!" Nope, don't care. And I wasn't driving to school to bring her a change of clothes when she got in trouble for breaking the rules. A few months later she told me that the school is considering uniforms because everyone is breaking the dress code. Well, duh! I knew those leggings were going to cause trouble.

I like the new look of your blog. Very professional.

My son is dyslexic . We had a bad time until we finally sent him to a University down in Florida that had a disability evaluation center. Then his mom went to the Linda Mood Bell school in Nashville, TN to learn the special techniques for teaching dyslexics to read. Everybody has some weakness. Mine was math as well.

Learning to be humble can be very difficult for some kids. My kids are the opposite, they struggle with a poor self esteem. They also tend to compare themselves with each other so I have to point out to them that they all have different gifts and talents. I need to praise them regularly so they gain confidence and feel better about themselves. Glad to hear your son is confident and knows his strengths.

The flashcards should definitely help. Smart that the teacher remembered to mention them. My son tried the 'well he gets to do whatever he wants' thing the other night when I wouldn't let him make his own YouTube account. ;)

we use many flashcards as well for Bo et Obi. They really help. Way to go, Mica :)

Broxton loves math... he hates homework and schoolwork in general though.
I wish I could get him writing better, but it is like pulling teeth