On Saturday we had a family get together. My nephew Emerson was fussy the whole time. My sister took him to the doctor's office. They determined it was his 6 years molars coming in that was bothering him. I held him. It seemed like the only time he'd stop fussing is when I blew raspberries on his cheeks - in the spots where his molars are coming in.

In the night Emerson got worse. He was super fussy, was having trouble breathing, was cold, and when my sister Terra checked his heart rate it was all out of wack. They called my parents over to take care of her other kids, and rushed Emerson to the ER.

They ran some tests, did some x-rays, and came up with no answers.

I took in my other nephews on Sunday. It was a packed day for sure! The youngest Edison is only 2. We had potty training going on. He repeated everything the boys said. Edison wouldn't go anywhere without his brother Elijah by his side. Elijah had to go to the bathroom with him. Edison said, "You pee too!" Edison had no accidents. 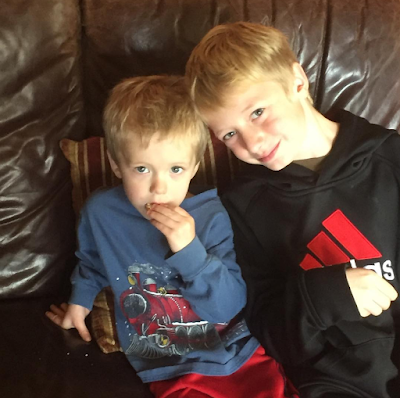 We built a giant train track for Edison. 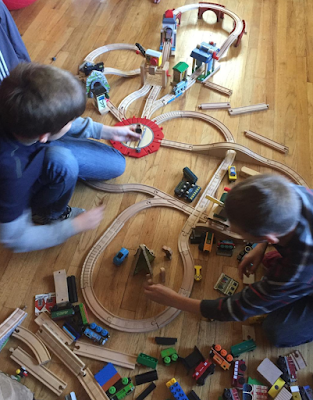 Here they all are: 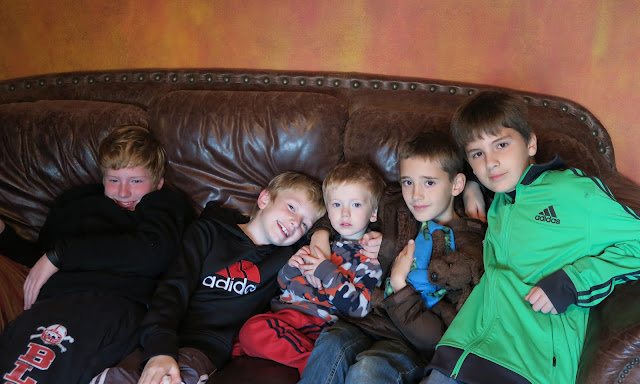 My oldest nephew Evan was pooped! He had a Boy Scout sleepover.

We went to the hospital. I didn't know if I should take up my two. As if I want them to get whatever nasty germs there are in the hospital. It was kind of hard not to. We had a potty seat in our car. Evan hadn't seen his parents all weekend because of the Boy Scout sleepover. Edison was asking for Mommy and Daddy all day. We washed our hands at every elevator stop.

The lady at the front desk couldn't believe how many boys there were. We had to spell out all their names because they are unusual names for the most part. I think at first she was thinking, "Oh no! Look at all these kids!" She quickly realized that they are good kids.

Emerson was still fussy. My sister was dead tired. Isaak asked why his finger was glowing. I said, "He's E.T. phoning home." My brother-in-law laughed and said, "Actually he's E.C. Emerson Charles." I explained the real reason why Emerson's finger was glowing to Isaak. 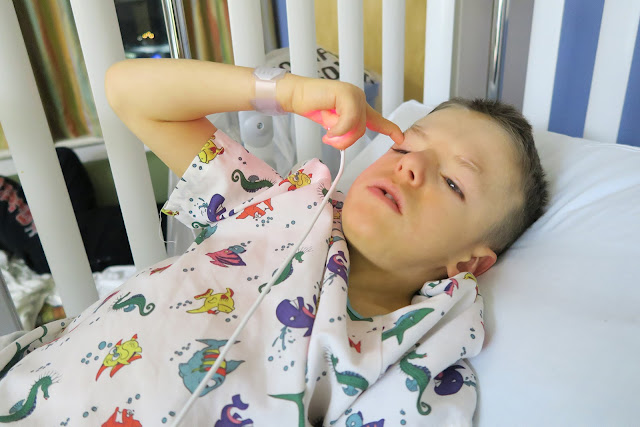 The hospital still doesn't know what's wrong with Emerson. He did vomit in the middle of the night, and seemed much better after that. He slept pretty good, and went to the bathroom on the toilet. He's a little more smily.


My sister with Emerson 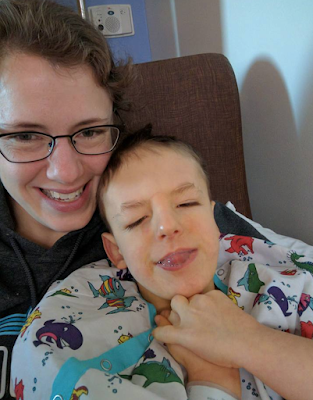 It takes 24 hours to get blood samples tested, so maybe something will turn up. With kids like him that have Trisomy 18 they kind of have their own unique systems. They get Pneumonia really easily. Emerson does have a hernia that she thought may be the culprit of the problem, but the X-rays showed no real threats. He does throw doctors for a loop at times.

Evan their oldest son went home, and threw up. I'm hoping it was just because he didn't sleep and eat well because of his Boy Scout event. I used to get stomach issues after a weekend where I had an overnight. It seems like every Thanksgiving and Christmas one family has the stomach flu. I hope we're not next.
Posted by An Apel a Day at 9:06 AM

What a weekend! I am hoping that Emerson is feeling better by now. It's so frustrating not knowing the cause of illness. I hope you get some answers soon!

I hope Emerson is feeling better! It does seem to be around Thanksgiving that everyone gets sick. You had a full house for sure - all boys! :) Hope you have a Happy Thanksgiving!

Oh my.
Hope everyone is getting well now. I hate hospitals...
I can't believe how GROWN Emerson is... makes my heart so happy!