I hope if you're a Mom that you had a great day yesterday!

Mine started out with a heart card from Isaak that folded out to look like a flower. Isaak said, "Ok now everyone else give her gifts, and cards." He's the only one that had something. I told him, "Isaak that's ok. I don't expect anything. Thank you for your card. I love it!"

I try and make the day as low key as possible. Sometimes Father's Day gets bumped up a bit, but that's only because my birthday lands on it at times. Double whammy, double the fun. ;)

I've been wanting to try out a local place for donuts. We went to LaMar's Donuts. They exist in KC as well, so not exactly just here in Omaha. Close enough. I've heard they are super good. They were offering 1 free Red Velvet Donut with cream cheese frosting, and a coffee. I took it! Everyone picked out their choice of donut, and I got a Butterfinger Donut for us to all split. 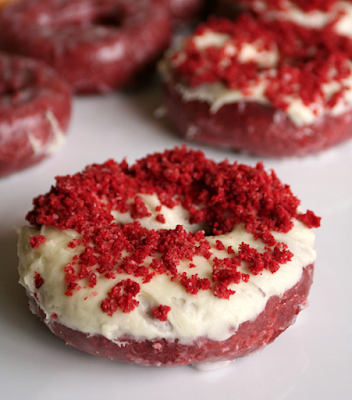 Then we stopped by somewhere fast to get a Breakfast Burrito.

I chose to watch an episode of Little House on the Prairie. It's been a year or more since we've watched that. It's crazy how we've taken steps forward, and steps backward with our world. Medicine, scans and care have all gotten better than ever. Back in the pioneer days neighbor's had each other's backs, doctors would care for people even if patients couldn't afford it, doctor's would barter for care, they'd make house visits when needed, you didn't have to have health insurance, or worry about prices going up, they did what they had to do to survive.

Are we better - more advanced today then we were back then? My answer is in some ways we're better, and in others we're worse. What's your answer?

Isaak and Mica went with Travis to the park to practice their mad soccer skills. Mica's struggling. Travis felt like he picked up some things working with him one on one. He stays with the ball, but doesn't kick it hard. He more or less plays patty cake with the ball. That's what coach calls it. I'm just proud of him for trying. He's never asked to try any sport until this year. Way to go out of your comfort zone Mica!

I finished a painting on Mother's Day. I've had it nearly done for quite some time, but the idea sort of looked lame. I had to go a different route. I think it works. I'll try and share it tomorrow.

Then I made homemade Chicken Enchiladas. Travis said, "Are you sure you want to make those? It's Mother's Day." I said, "Certainly! Now go take care of laying the mulch down outside." ;) I made extra - for when I have surgery. I've been saying I'm going to start making extra dishes for that, but it hasn't happened until last night. Life is busy. It's not going to get any less busy, but maybe I'm holding things off to the last minute. Ekkk! Anyhow they were oh so good! I should have photographed it to share a recipe, but I was too hungry, and didn't think about it. Even the boys that usually say, "It's too spicy gobbled them up!" By the way they are both growing. Maybe that's why I can't seem to make enough food! Isaak and Mica ate 2 whole Enchiladas. We had side dishes as well.

My goofy boys and I: 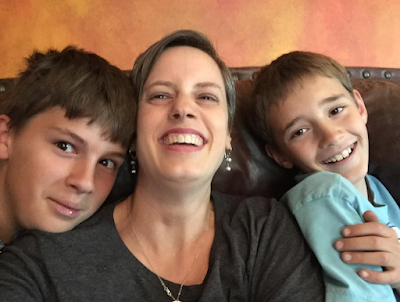 I think Jason would wipe them out of those Butterfinger donuts!

Great photo of you and the boys! Yeah, the donuts do look delicious!

Happy Mother's day, Alissa...looks like you have a wonderful time with your lovely family! I was on my way to another country during the Mother's Day, but we had a wonderful celebration the night before :)

What a sweet, sweet day. I had enchilladas too! How funny. Except I didn't do any cooking. My hubby is a hobby chef, so I could have had anything I wanted. So, surgery? I feel so out of the loop. Hey, I'll keep you in my prayers.

My boy's eating more too these days. Goes w/the territory I guess. ;) I'm glad you got your card for Mother's Day. I had an awesome day. I love any excuse to get everyone together. It isn't as easy these days as it used to be, three of them are grown and have their busy lives going on too. :)