I sign the boys up for a lot of summer camps.


The last camp the boys went to was in my opinion the best one. Well minus Mica getting a rash one time from the mud. That's a different story from a different year.

Hummel Day Camp is only $35 a week. Yep you heard that right! That is 9-4, with bussing and a lunch provided!

You can visit Hummel Park any time for free. You can't do archery, but they have hiking, golf frisbee and playgrounds. It's supposed to be haunted. They had a lot of ghost stories for us when we were kids, but now they don't tell them. The stories would scare the kids and spread rumors that weren't true.

What Do They Do:


The problem is that it fills up in a matter of a few minutes. So, if you're not on top of it, ready to sign up on their crappy city website, then you loose a chance at signing up.

My sister and I actually practiced ahead of time, called each other to remind one another, and it went slick this year! We got all 4 boys in! Isaak and Elijah are the same age. Mica and Evan are the same age, but a year apart in school.

My sister was so kind to allow Travis to drop them off at her house, and she took them to the bus stop and picked them up, then he picked them up at her house at the end of his work shift. We had a dilemma that week. Travis was still manning the lab because his 2 bosses and co-worker were out of town. He was the man in charge. 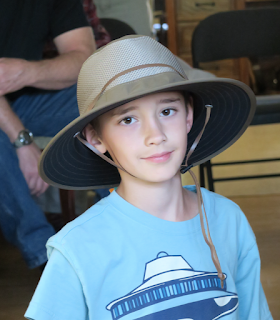 I don't know if it's a good trait that Isaak has to stand up for people and himself, or if it's a really bad trait. I wrote this trait down at his Leadership Camp as something they should work with him on. So far I've seen no improvement. He needs to learn to walk away from situations. He's not one to start problems, but he's one to finish them. People see that, then they think he's to blame for the whole problem.

Isaak has always been the youngest/smallest out of the cousin group: Evan, Mica, Elijah and Isaak. They all hung out early on in their lives because Terra and Travis babysat. I think because Isaak was the youngest in the pack he got picked on. There was a moment where Isaak had enough! He wouldn't stand for injustice.

I do like how in this world of little empathy - Isaak has a lot of empathy. He stands up for friends, cousins and himself. He wants a world that has justice. He doesn't fight a person without being picked of first.

As a parent I'm not sure I have the answers for everything. Certainly I don't have the answers for Isaak standing up for what he feels is right. I've told him about choosing his battles. Sometimes I think as a society boys would be better to battle it out. Most of them would quickly get over their problem after that. We live in a different world now.

At home when the kids have a struggle I send them outside with boxing gloves. So far no one has broken any bones, and they are happier after their time outside.

At the end of the camp on Friday they invite families out to hear their camp songs, watch and listen to camp skits, and to hear each camp pass out reward certificates.

Mica came up with a camp song that went to Queens, Bohemian Rhapsody. He spent quite a bit of time on it, and was proud of his lyrics. It really pissed him off when he didn't win that competition. Just like we had a talk with Isaak about his problems above, we talked with Mica about competition. He'll soon go to middle school with a lot more kids than what he's used to. Competition will be much more of a thing.

Anyhow for his camp Mica won the Bohemian Rhapsody award. 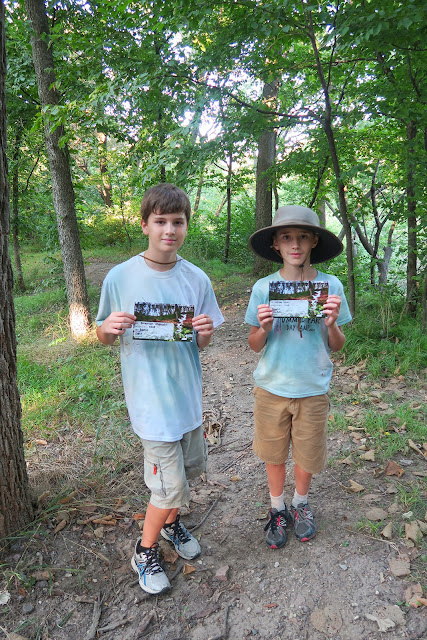 Isaak I guess carried a stick everywhere he went. He loved hiking! He got something like The Walking Man award.

The kiddo behind Isaak is my nephew Elijah. 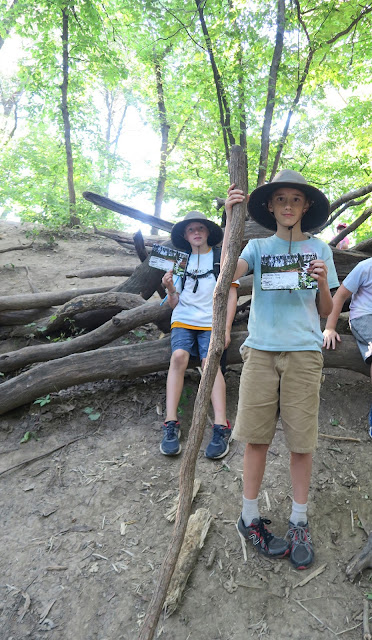 When you were a kid did you like getting in the dirt/mud?
Posted by An Apel a Day at 3:33 PM

Email ThisBlogThis!Share to TwitterShare to FacebookShare to Pinterest
Labels: Hummel

We used to go to the ditch and catch tadpoles, that was my "dirt." I look back and wonder if I ever wanted to do summer camp. I've never been to one, but I bet they are fun!!!

my son Bo is quite an adventure but joining camp here is expensive :((

Camper here are expensive too. $35 a week is a real steal. I think the cheapest I have seen is $100 and I think you have to be low income to qualify for that price. Sounds like the boys really enjoyed their camp adventures this year!

Theresa - Ya this camp is a steel! The other camps aren't as cheep as this one is that's for sure.

I certainly didn't mind getting dirty when I was a kid. We had that life where you woke up, ate breakfast and then left again only to come back for lunch and dinner. Everyone stayed and played outside (climbing trees, digging worms, whatever). :) Glad the hat was found. The new lyrics to BR sound fun. That price for camp is awesome. Glad all four boys got in.

Sounds like an awesome camp! I have no idea what to say about Isaak fighting back. I don't know if it's right or wrong. I'm currently working with two girls who constantly nitpick one another and then cry when they don't get their way (4 and 7). I think the parents are hoping I will be able to figure out how to stop the fighting. We will see. I'm not really a fan of sending them outside with boxing gloves though. :-/

Mandy, I wouldn't send anyone else's kids outside with boxing gloves. Just 2 brothers this Mom or Dad can watch. They've never had too many issues. They come back usually happy with each other. Boys tend to fight and get over things most of the time. That is unless 1 kid won't drop things at all - like a little kid in Isaak's class.

We also send them to the landing at times to resolve things.