We had something digging this hole behind our air conditioner. 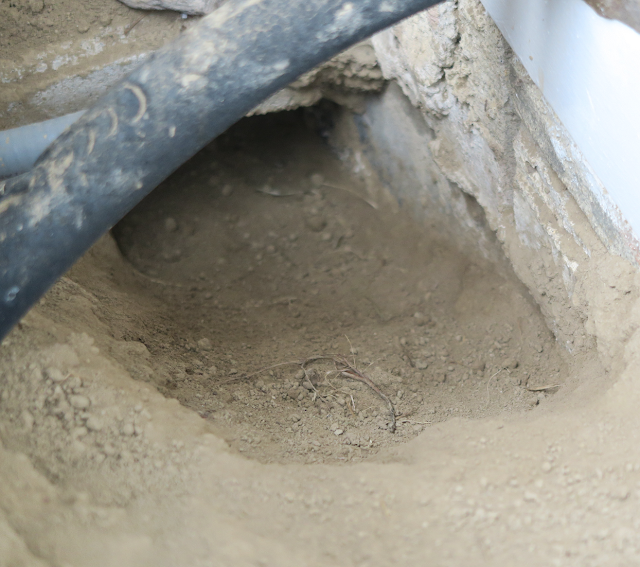 It was against our house, and under our covered patio, so we needed whatever it was to stop!

Travis called the Humane Society. They told him that it's illegal to trap a wild animal, and release it elsewhere. That's how disease spreads. He asked for a number of someone that could help him figure out how to get whatever it was to leave this hole, since it was up against our house.

The person at the Humane Society thought for sure it was a groundhog. Travis saw raccoon paw prints around that area, and noticed corn that we're growing was tampered with.

Then it happened, he got a sighting of the groundhog. He saw it's tail and waddle walk. Then it scurried away when it noticed Travis saw him or her. It looked oh so guilty and scared in it's hole.

I bought Coyote Urine on Amazon. I never knew one could buy that stuff! Who collects Coyote Urine, packages it, and sells it? 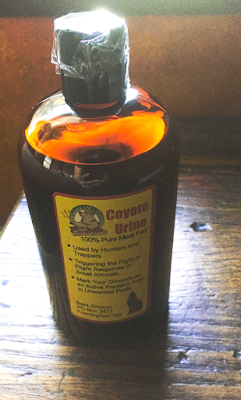 Apparently it smells pretty bad! Travis put a little around the entry hole, but it didn't work.

He called the Nebraska Wildlife Park Commission to get more tips on getting rid of the groundhog. We weren't all about destroying it. We just wanted it to move.

I Guess the Whole Idea Was to Annoy it:

On Friday morning he hooked up a radio to play all weekend in the out hole that the groundhog created. He wadded up newspaper to shove in that hole as well. That was to gage if the groundhog went out of it at all.

Outside the entrance of the hole he sprinkled lots of cayenne pepper. They get it on their paws, rub it on their face, and it burns.

Travis did warn the neighbors about the music. They were cool with it. I do have to say that it messed with my sleep all weekend. I felt like a soft alarm was going off. It was hard to fall asleep, and when I woke up I thought something was wrong with my alarm clock. Once I Wear My Sunglasses at Night was playing, and I pictured the Groundhog with sunglasses on walking all over our yard.

Radio was played, cayenne pepper was sprinkled down by the entrance. Tracks were in the cayenne pepper. It moved the paper by the radio. Flies started to appear, so we wondered if a baby was dead in there. :(

No newspaper was moved.

Travis put all purpose flour around the hole. This was again just to see if there were prints. No prints!

He's going to lightly put dirt in the hole, and sprinkle Coyote Urine around the hole entrance and exit.

I'm so surprised that the feral cat that hangs out in our backyard didn't kill the groundhog!

Have you ever had to get rid of some type of pest? How did you do it?

Poison was our last resort, but if we had to, we would have used it.

Update: After a few days of no groundhog it's back. Travis refuses to give it poison, so more radio, and he's repeating what he did before. I just want it gone.
Posted by An Apel a Day at 11:40 AM

Thankfully, we haven't had any issues (did have a mouse that died in the walls though a few years back at it smelled horrible for about a week!) My neighbors has a mama raccoon give birth in their attic. Done over $1000 in damages too. The called the humane society who came out and set wire traps and removed it for them. I don't understand why yours didn't do the same?

Theresa, something about how it's a wild animal that they can't legally come out to do anything with it. So all yesterday and earlier today no signs of the damn thing. This evening Travis looked, and there it is sitting in the hole. Travis swears that something can be done naturally. I've heard from others poison is the only way to go. I'm beginning to think they are right. That or keep blaring the music.

That really stinks that they won't come out. Do you have animal control (not part of the humane society?) Maybe they could come out and help. I'd be worried about the poison just because I wouldn't want it to get lodged under the house and start smelling bad. Hopefully, he'll move on soon!