On Sunday we went out to a fancy place for Omaha's Art and Entertainment Awards. Travis was nominated for one of the best group shows in Omaha. He didn't win, but a super nice couple won that were sitting right next to us. They had a group show that was all based around sensory. The wife was blind, and the husband had only one working leg. 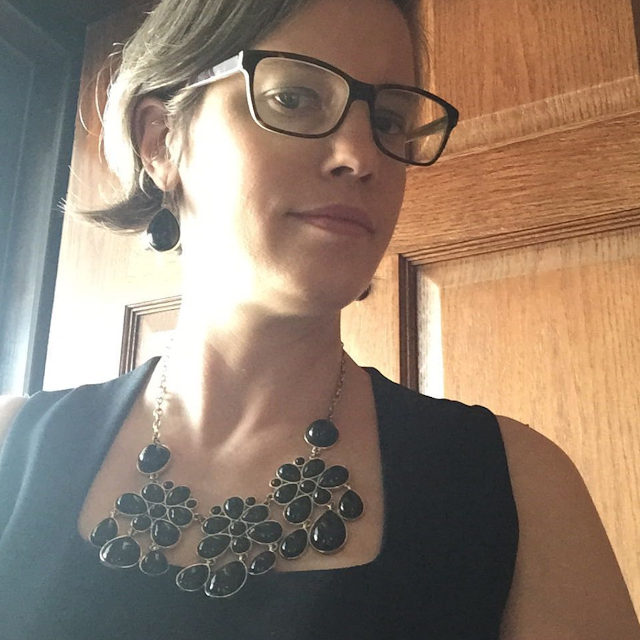 Fast forward to yesterday. I had an appointment to see a Plastic Surgeon. I've had a cyst (so I thought) on my forehead for a year or so. I've tried Apple Cider Vinegar, Tea Tree Oil, and something called Bread Poultice on my forehead to get it to go away naturally.

I tried to go to a Dermatologist. They sent me away saying if they cut me part of my face could go paralyzed. 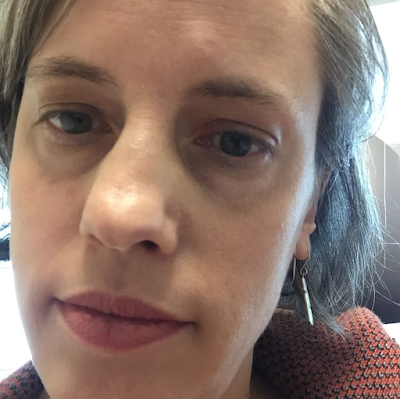 No wonder nothing natural would work! It was behind a muscle, and he thinks it was a tumor not a cyst. It was about the size of a pea. The tumor is off to be turned in. He doesn't think it's cancerous. 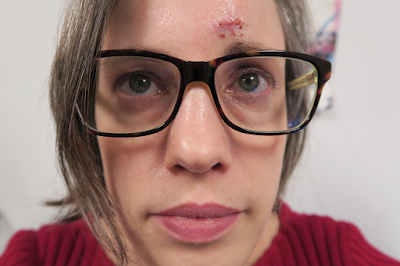 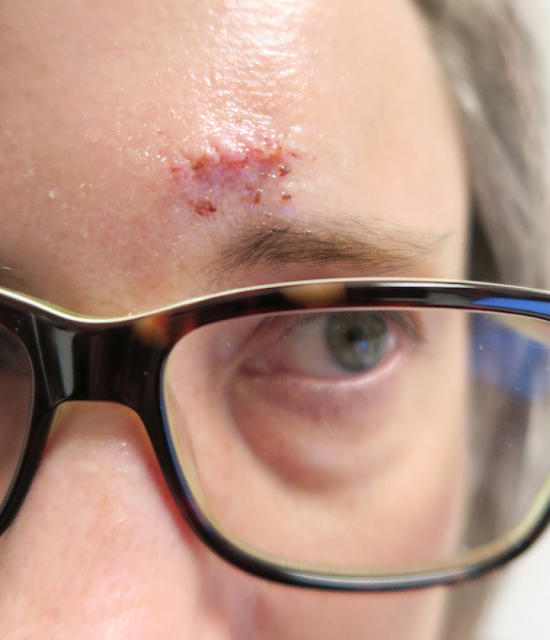 The swelling should go down. That's from him digging around behind the muscle and the pain med. I think it looks worse than it will look like after it's healed up.

For some dang reason I'm all emotional. Why would that happen. I've felt like crying at the drop of a hat.

I taught today. I'm so thankful for my 1st year class. One guy said, "You actually look pretty good. Like it's better than I thought it would be." I had others ask me if I was ok, which was nice.

Then there's my 3rd year class. I've never thought they were kind. More like a lazy class. Top that off with the fact that when they walk into the first year classroom they say, "Why is their work so much better than ours?" My answer is always, "Your work could be better. You just need to apply yourselves." They leave the classroom often, fall asleep when they shouldn't, don't get their work done, and the list goes on...

Well a third year student walks in, looks at me, giggles, and talks to a friend. Then giggles some more. I said, "What's so funny? My forehead?" They giggled and said, "Yes." It took a lot not to call them choice words. Remember I'm their teacher. Looking back I should of said, "Have a little empathy!"

I wanted to cry over the good students, and cry over the bad ones. I don't know why I'm so emotional. Could a doctor cutting into your head really set off emotions? It's so weird.

Back 20 years ago I had a little swelling under the skin on my forehead. The doctor cut it out and it was benign. They used stitches, strips and bandages. I looked like I had a severe head injury in a car wreath for a tiny little cut. Sending you good thoughts for a fast recovery and strength to deal with nitwits.

I don't think it looks bad at all. In a few weeks, I'm sure you'll hardly even notice the scar there. Glad you were able to get it taken care of. I know it's been bothering you for quite some time.

Look have the hubby kiss a boo-boo & it'll all go away... then use neosporin (not sure on the spelling there). Anyway, that stuff has worked miracles I mean no scars once you put it on the boo-boo & yours isn't bad at all & yes, you are still very pretty! That necklace really becomes you. I'm glad the doc got it all out. Just wait for the biopsy when it comes in. It was probably just a tiny cyst & it's all gone & you worried over nothing. Keep us posted my friend... and go eat a candy bar. Chocolate cures everything... ~snicker-snicker~

I hope everything turns out ok. Thanks for hosting and I hope you have a wonderful week. Sending out positive thoughts your way.

I think the emotions are normal. Anytime that something out of the ordinary happens, especially when you don't have all the information around it can set off emotions. I'm glad that they were able to help you, hoping the news comes back without anything to worry about. Teaching is hard even when you are at your best, you never know what kids will say. Stay strong! You are beautiful <3

I think it's your body coping with the pain and also probably your brain saying 'This could have been much worse - why did we wait so long?' Take care and look forward to seeing it once it's healed and we can barely see it!

Glad you got it taken care of. Also, glad you had a way to bite your tongue I probably would have told the little heifers a thing or two....
Another thing... yeppppp
You Are a pretty mama!!!

You ARE pretty. Don't doubt that for a minute. I can say that because I'm happily married so you know I am not what my daughter calls "a creeper" which is apparently a dirty old man who hits on younger women. But I've been around awhile and I can say with absolute authority you are a fine looking woman.

Don't let the thing with the stupid kid bother you. Clearly the product of a negative environment at home, to be so lacking in manners. I'd flunk her, just because I could. >:-(

As for getting all emotional, I think the person above is right. You had to deal with getting cut on, with worrying about the tumor/cyst, that's all tough on a person.

Anything health related could cause emotions, I would think! It's easy to get jarred when there's a tumor mentioned too. Tumors are nothing to play with... and thank goodness you went elsewhere and had it looked at/removed. What if you hadn't!!! I think it looks good. I'm glad you're moving forward now without it. And pfht to the students who aren't empathetic. I work with nice and not nice students too. All par for the course, and shame on those kids (or more likely their parents in my case) who don't have a better foundation.

You still are beautiful, A. I totally agree with Lydia C. Lee .