How Was Your Fourth of July?

All while I was growing up fireworks were illegal in Omaha, Nebraska. People had to buy them in Missouri. They still lit them off, but it was low key. If it got out of hand neighbor's called, cops came, and that was it for them.

Since Mica was a baby, so 13 years ago they became legal.

Our mayor doesn't want to put a stop to fireworks. She wants to lessen the time they can be fired off.

Then there's me, typically the one that can see both sides. I pretty much stand with the mayor on this.

Against: Many pets hate them, some people in combat have trouble with them, some people on the spectrum can't deal with them. At least if they were certain days people would know, and could wear sound headphones. They still would have the big shows, where you could see them. They are getting pretty out of hand for individual families. I really hate the liter, and the fact that people literally blow up their money.

For: It's not my money they are blowing up. Many firework stands around here are non profits that benefit from the funds. By having them legal I can literally see them all over my property without going anywhere. We do have to clean up because debris goes into our yard, but it's not all the time. I can sleep through anything, so the big booms once a year doesn't bother me.

I'd be a horrible politician because I usually do see both sides to everything. Either that, or I'd be a good one because I can see both sides to most everything. People would refer to me as a flip flopper probably. Honestly I don't flip flop from one stance to the other. I just rest in the middle usually always, trying to bring the other side to the side against it. That way they can see more than one view. Right, or wrong that's what I do.

Are you for or against mass people in cities lighting off fireworks?

We didn't buy any at all this year. Why? Because our neighbor's had enough for us to enjoy.

I did make a special breakfast: Coffee Cake for the main dish. Other things with it. We only have Coffee Cake once or twice a year.

Travis did grill a special meal: Steak, corn on the cob, sweet peppers, and cabbage.

I did make a special drink: 3 squeezed lemons or limes, 3 lemon or lime La Croix, drops of liquid lemon stevia or powdered stevia, 1 cup of ice, and water. It tastes wonderful! The boys love it!

I made Jell-O filled Strawberries: 2 containers of strawberries, or 1 big one. We grew our own strawberries, but I bought some. The ones we grew are really small. The bigger you can get, the more room to pour the Jell-O. Core the strawberries out with a small knife, be careful not to cut a hole in them, put them on ice cube trays, or you can use an empty egg carton for the strawberries to be upright.

Cut the strawberries, and have them cored before you begin with the Jell-O.

Cook 1/2 cup water - you could replace this with vodka but I can't drink, 1 package of blue Jell-O and 2 packages of plain gelatin - whisk while heating up. Pour the Jell-O mixture into the strawberries.

They set up really fast because of the extra plain gelatin.

You could replace the blue Jell-O with any flavor of Jell-O, for any occasion.

Put the leftover strawberry centers in the freezer for a smoothie.

They were cute, and Mica enjoyed helping me make them. Isaak asked, "Where's the white?" I responded, "In the seeds." The seeds are actually a yellow color. I suppose you could top them with whipped cream to get the red, white and blue. Then you can't see the blue in the photo. 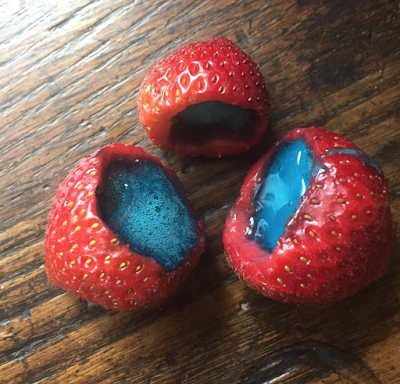 If you celebrated Fourth of July, did you make anything special?
Posted by An Apel a Day at 10:12 AM

Fire works don't bother me... We didn't go see any this year..
I had to work the next day, so I didn't want to be out late.. and the crowds annoy me. Guess I am a party pooper. Our neighbors did some the previous weekend, but we were already in bed, so we didn't see them, but good grief we heard them!
Hope yall had a great day!
We went to the pool, then my dad grilled out...
Nice and low key, perfect for me!

I made red white and blue whoopie pies. They didn't look good, but they tasted amazing.

I am for fireworks if done reasonably. I'd say none past 11 because people do have to work in the morning. And, maybe only on the 3, 4, and 5th of the month. People will be setting them off for the next week here and it does get tiresome after a while.

I don't think it would really matter here what rules the county passed. It's a big county, and people can shoot off fireworks without worrying about the Sheriff being able to find them, even if he wanted to, which he doesn't because he doesn't want to make voters mad. Then too, we can buy fireworks all year round just across the Tennessee border.

My old dog hates fireworks. They do bring back memories for me, especially if someone is firing Roman candles off way out where I can only hear the cough they make, but I don't climb under the truck or anything....

We just stayed home on the fourth, but I still like the holiday.

we pretty much enjoy the fireworks. But you're right, it's so darn expensive to have a good one. Thinking about all those money being burnt! Love the strawberries jello you made. looks cute!

The strawberries are great! I don't like the fireworks debris coming over to my house. Not sure I'd ban it. It doesn't bother me that much. I do worry about safety for people. I don't buy any. I almost did this year. We were driving through a state that had huge stores and I considered getting some for my grown boys (who both like them). I opted out though because were doing so much stop-and-go for days at a time. :) Glad you had a special meal grilled for ya's!