This year I sat on doing our holiday postcard a little too long. So much of me wanted to say bah humbug to the card. It could be that the boys are growing up, and are harder to make cute, maybe it's the fact that I just feel overwhelmed with things, or possibly it's that Isaak's having a crappy school year. He does so good in school, but has a difficult teacher, his basketball team fell apart, and one of his best friends didn't invite him to her birthday party. I just want something to go in his favor! I just wasn't feeling it this year.

Instead of a postcard (due to time) we did a holiday doctored photo. Our theme was Home Alone. Once I started working on it, I got into it. Isaak was so excited that he was the star of the card! Isaak played Macaulay Culkin. He loved being the star of the photo. That made me smile. He didn't get left at home, while we were on vacation. He did however get left at school when Mica was supposed to pick him up. Thankfully they do have a place called Kids Club he could go. He does cook us breakfast by himself on some Saturdays, and in my mind he kicks some butt!

The rest of us were robbers. While I realize there are only two robbers in the real movie, our photo has three. It was so easy to have Mica make that face. He does it in many photos when I ask him to smile. This time I wanted the crazy face. Travis was happy to wear his stocking cap that he has on most of the time. I did get the, "Mom why are you wearing jewelry? A robber wouldn't look nice!" Maybe I stole the jewelry.

I tweaked the Home Alone Logo, so the photo place wouldn't give me grief about printing it. The original has a line under it, a line breaking up the roof on the house, is never a cream color, and has a different font. 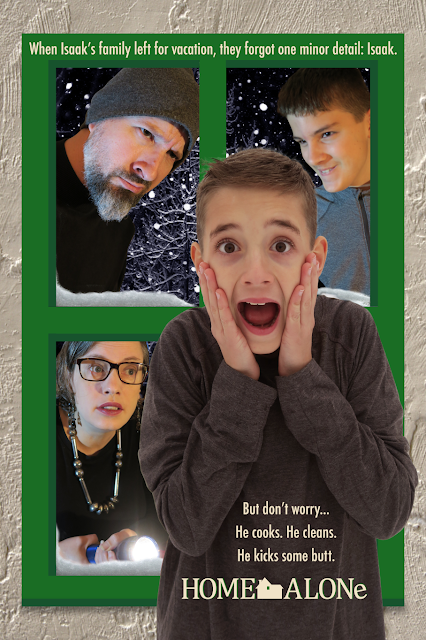 I added a infogrphic style letter. Basically it includes things we've done, or like. It was nice to not be confined to a tiny postcard space. While it doesn't go to a song, or rhyme it's still fun. 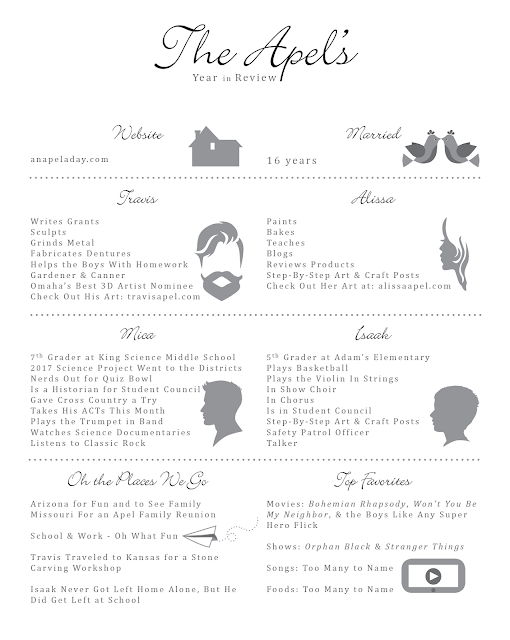 Do you make a holiday card? Are there times where you just don't feel like doing everything you usually do?
Posted by An Apel a Day at 3:57 PM

Nice post you did well it's brilliant and Mica did his perfect favourite expression heheh!

Mica did that iconic home-alone expression very well! Love the postcard, A,

@Veronica I think you're talking about Isaak. He's the one playing Kevin. He's my youngest. Mica's the oldest.

I kind of adore this. You did an awesome job. I'm so jealous of your photo cards.I think we are just sending store bought cards this year. I have to start in July if I want to do anything creative…

That is so cool. Thanks for sharing. Thanks for hosting and I hope you have a wonderful week.

@Mandy I started after Thanksgiving. Perhaps if I started before I wouldn't have felt the pressure.

That's very cute. Hopefully next year is better for him too.(So upsetting when that stuff happens)

Your holiday cards never disappoint! I'm glad you made Isaak the star of the card. It seems like he really needs a little pick me up. Here's hoping that 2019 will be his year to shine!

haha he did a very good impersanation of Macaulay Culkin!! I really love the idea of the infographic for your year in review. Happy holidays!

Aw sorry to hear he's having a rough streak. I do love the photo. You always do great on these. :)

Your Christmas card is awesome!! Love the way it turned out.

I love the card soooo much! It's fun to see all of those faces in the card..Happy Holiday, Alissa..