We debated if we should have a big get together, or not. We invited many people on facebook to a Dance Party, and so many didn't RSVP. We had 3 people that said they were coming.

Isaak was sick prior to the big Dance Party. He invited about 5 kids to come. None of which said they were coming. Mica invited 2 friends. One couldn't come, and the other didn't respond.

One of Isaak's friend's (that wasn't invited) Mom messaged me on facebook, "Is Isaak still having a New Years Eve Party? My son didn't get an invite, and was wondering if he could come?"

Awkward considering that Isaak has kind of had a falling out with the kid. He cusses a lot, is pretty negative, and got on his friend's YouTube channel to make some not so nice comments. That was handled by the school though. We're not supposed to know anything about the incident.

Isaak was pretty bummed his friends weren't coming over, so I was not sure how to handle the facebook message. I messaged her back saying, "We haven't had very many of our own friends RSVP, so we're unclear if we're having a big Dance Party. He is welcome to come play games, and eat food if he likes."

Then I had Isaak asked a kid that hangs with the other kid. We had 2 crazy boys at our house for New Years Eve.

It wasn't until last minute that one of Isaak's other better friends RSVPed. Get this...it was the kid that had not so nice things commented on his YouTube Channel. I informed the Grandparents that are much more involved in the kid's life than his parents about the situation. He came over anyhow. 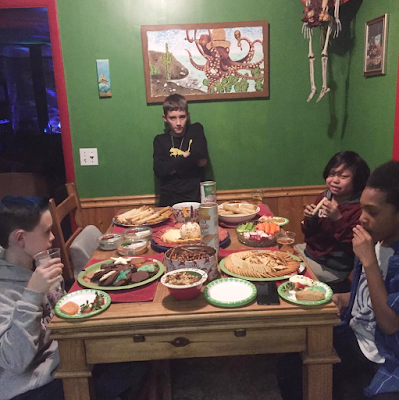 Isaak pouted as soon as his friends started rolling in. Much later, and after the fact I found out that Isaak was annoyed that all of his friends had smart phones. They were all on them talking about what games they each have. Isaak doesn't have a smart phone, so he was feeling pretty left out. He didn't communicate with me what was bothering him. I would have had a basket for phones to go; had I known the problem. Even when Isaak's cousin Elijah came, he too was upset that all of Isaak's friends were on their phones. He didn't say anything because he didn't want Isaak's friends to get in trouble.

I was preparing food, and talking to different people that walked in the door. I had no clue what drama lurked in Isaak Apel's bed room. It never occurred to me that technology would be so fun for some, and such a drag to others. Now I know. He's in 5th grade, so I didn't think I'd have to watch them like a hawk.

The next thing I knew the kid that came late had a knock at the door from his Grandpa to pick him up at 8. The kid texted him, and I again had no clue. I'm still wondering if something was said in that bedroom that offended this kid. If so it bothers me. I tend to worry about stuff too much. I'm where Isaak gets his strong empathy. I just like everyone to get along. I dislike school clicks. Isaak's classroom is full of them!

The kid who had his Mom message me on facebook was dropped off with a, "He's spending the night ok?!" I was like, "Ok." It kind of took me off guard. I wonder if she just wanted him out of her hair, so she could have fun. I guess that's ok, but I didn't invite him to spend the night. The kid has asthma worse off than I do. He was packing in the sugary food and drinks. Then his asthma went crazy. I called his mom and she said, "He has his medicine. You can drop him off at home if he's a problem." He's 10 with an asthma flair up. I don't think I'd ever drop a kid off in that condition. He crashed on our floor. Later on his parents stopped by to get him.

We had 5 guest of our own show up. None of which RSVPed. All the RSVPers didn't come.

Poor Mica only got to hang with his cousin Evan just for a little bit. Otherwise he was on his own. He's fine though. It doesn't bother Mica in the least bit to hang out on his own.

He talks about kids, but never has too many over. His school is quite a ways away though. Do you hang out with people on New Years Eve, or do you just have a quiet night at home? I told Travis I'd be ok with a game night, and food. He rolled his eyes at me when I first brought that up, but now I think I'm rubbing off on him.
Posted by An Apel a Day at 11:50 AM

My kids had a sleepover with their cousins in the hotel (because that's where they stayed) and had a blast indeed. While us, at home, after spending the whole morning and afternoon on the beach, we slept at 11 and missed the count down LOL.

It can be hard when all of the kids have smartphones and he doesn't. It would have been nice if they would have interacted with each other instead of playing on their phones.

The asthma child's parents sound like a real treat *not* Sounds like they wanted to go out and used you for a free sitter.

We always stay in and play board games with the girls. Mariah has had her boyfriend over every year for the past 5 years. This year her boyfriend brought his sister over too. Allison decided she was too cool for us this year and went to a high school party instead, then slept over at a friend's house. At least one of my kids still likes to hang out with us haha!

That's so funky that the mom said the kid was spending the night. That kind of thing is annoying to the max. Makes me feel bad for the kid. Sorry the party wasn't all that you wanted, but it's nice that you have the gathering. We stayed in and blew our little paper horns at midnight. :)

We stayed in... lol, actually we were sleeping when it struck midnight.
ha ha haaaaaaaaaaaaa