I know I've been hanging low for blogging lately. It's the end of the semester where I teach, Travis has been working long hours on his chair design that should be finished as of this morning, Isaak has homework he needs help with most nights, the boys have had a lot of evening events for school, and I've been looking for freelance design work. Travis has yet to mow the lawn. He won't let Mica or I do it because it's the first time it will be mowed. With my allergies it's not a great idea I mow anyhow.

I have to be honest...I didn't know what to expect with this academy. I do know a few years ago Mica wanted to be a Pediatrician. He's since changed his mind, after he had Astronomy class. I told him it's not as easy to have a career in Astronomy. He said, "I can be an Astrophysicist." I said, "That means you have to have a lot of math, which you don't care for. You can't live in Omaha, Nebraska for a career like that. That's ok you can move." He didn't say anything. I wanted him to try out the Health Care Academy because it's free. If he doesn't like it, he isn't paying for college classes to realize that. I convinced him to join up with the Health Care Academy at school. They have a one week camp during the summer, and lots of classes and activities during the school year. He was hesitant, but decided to apply because I asked him too. He had an interview, and had to fill out an application. Mica got in. If he hates it, it will be my fault. Ha!

The Health Care Academy is ran by his homeroom and science teacher he had last year. She was great for both. Good vibes going in!

What the Health Care Academy Expo was About:

They were slow to get started. Lots of speakers, pharmaceutical booths and food.

I found out that the King Science students will be working with patients that have Multiple Sclerosis, Parkinson's, and Dementia. I've known people that have had each of those.

One speaker has Multiple Sclerosis, another is a Neurosurgeon, there were Pharmaceutical Reps., and Mica's teacher.

They weren't big Pharma! They are in support of therapies and research, for all these diseases. They had ice packs, neck wraps, pens, and other things to hand out.

One thing that the patients need to do is laugh every day. That can be hard when you're depressed.

They have to work on coordination. Another challenging thing. If your body is giving out, how do you control it? The students had to play ball with the patients. There's a lot of communication skills that have to happen to play catch with someone that may not be able to see, can't react as fast as someone that doesn't have a disease.

I was feeling inspired by all the speakers.

I was thinking...I hope Mica gets a lot out of this! I want him to be inspired, and feel more empathy than he currently does.

While I was thinking all this Mica leans towards me and whispers, "Mom I think I know what I want to do with my science fair project next year. I want to change graphite into a diamond. I've seen a video on how you can do that. That would be cool right?" Here I was thinking he was going to have something health care related to say, or how he's learning so much about MS, but nope. Maybe he'll be more empathetic and inspired next year.

It's odd that there are Spiehs' at most all of Mica's school events. I don't know them personally, but that's my maiden name. Not a lot of Spiehs' in the US. So a Spiehs was called up.

Mica got called up to. He does this thing where he dances in place, while he's up on stage. Maybe he's trying to be cool? It's too hard to get a photo of someone giggling all around. Ha! 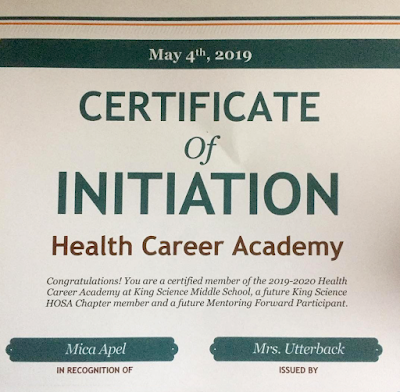 Did you take any health care classes in school?
Posted by An Apel a Day at 9:37 AM

I wish our schools had something like this. I'd like to find something to put Leah in as she is just in a weird place thinking she doesn't even want to continue school after high school. (not happening on my watch) I think if we had more career oriented after school activities and camps, she'd be excited about the future. I hope Mica enjoys it. It does sound like there are some big positives going in, so at least he's starting off on the right foot!

I love that he as so involved and things with his school. Awesome that you got inspired by the speakers.