School Started for all of Us

Back to School Night was crazy! I don't know that, that much changed from last year. It just seemed nuts! Mica's started at 3:30, Isaak's started at 5, and we didn't get done until 7.

I've never been one that gets anxiety when being around lots of people, but that night it was even a bit much for me. Imagine what it's like for someone on the spectrum!


After all the above, then it was time to meet all the teachers.

I for sure do like to meet them. They often times have a list of supplies to get, an overview of the course and it's great to see their faces.

They messed up Mica's schedule.

Mica's been talking about wanting to quit playing his trumpet. I said, "Well you have two choices in school: Art or Band, which one do you want to do?" He said, "Band I guess. It's an easy A."

He never has gotten better with his trumpet. He still hits crazy notes.

When we got his schedule it had Art on it, instead of Band. I most certainly didn't change it, nor did Mica. I said, "It's up to you. Maybe it's time to switch gears." He said, "Ok I'll go with Art."

A blessing in the mess up possibly?

Mica will be the lead voice, for the morning announcements.

He's been super excited for this all spring, and a month before school started. He's been practicing, and letting me hear the sound of his voice. He didn't start yet because there wasn't much to announce. I think the group could have welcomed students back though.

Mica's homeroom will be with his Healthcare Academy.

It was great that some organization donated pretty high end backpacks to them! He can't carry it in school, but will certainly carry it to and from. 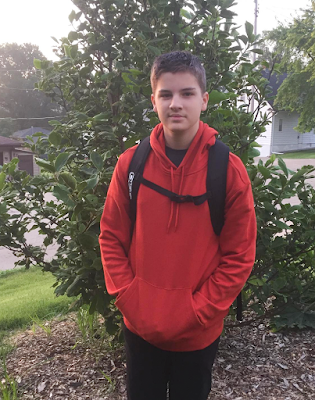 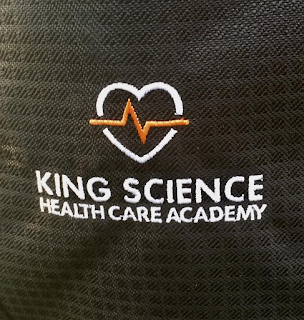 So far he hasn't gotten lost. That was something I was worried about. He is like me, not great with directions. Not too long ago he went to the bathroom in a store. I stayed where I was, and he was escorted over by a store employee, and his eyes were flooded with tears. His middle school had a big addition, and one spot is really odd - you have to walk through the library to get to another wing.

His week has mostly been filled with rules and procedures.

We are excited that he has Piano as a class. He has Strings before fall break, and Art after fall break.

There are no official sports, but he can get into intramural sports.

Isaak did decide he wanted to eat breakfast at school, but quickly learned that it wasn't enough food. He's a slow eater, so it's good he has a little at home and a little at school. I do have to watch his carb intake. He wants the good stuff at each place. 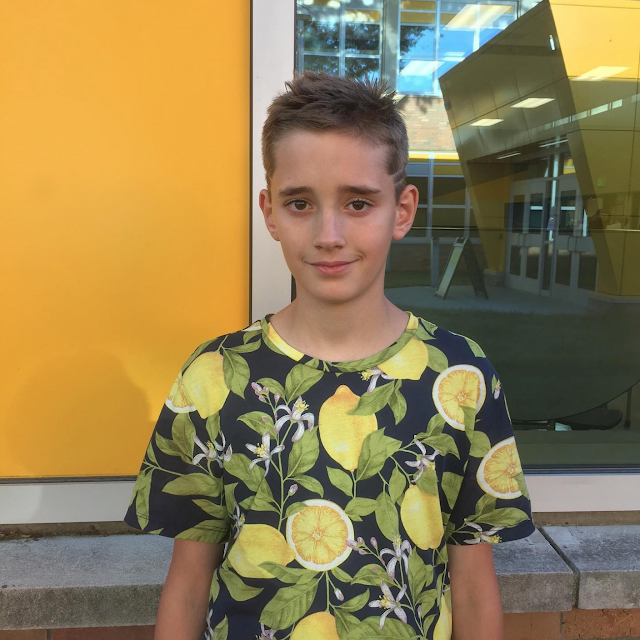 I have three classes this semester.

I love my third year class. It's the best I've ever had. First year, it's too early to tell yet. One girl is super social with the guys, and has ventured into second year a lot. The rest are fairly quiet.

Traffic has picked up. We have construction right by our house. It has to be done, but it adds to the congestion.

Have kids started school by you? Do you have a lot of construction by your house?
Posted by An Apel a Day at 12:31 AM

You've got a full plate, for sure! We just went back yesterday, but my calendar is jam packed with appointments this month too (mostly for Leah). I've been fighting cough since we got back from NY, so I've had to add in additional blood work and doctor visits to my schedule on top of things. Mariah moved back to Purdue last week, so that lessened my load a bit here, which is good.

It sounds like both boys are off to a good start though. I hope Mica enjoys his announcements job and Isaak keeps on adjusting well to his new school.

Can't say I miss all the back-to-school registration stuff! Here's wishing your boys, and you, a great school year.

Meet the Teachers night is always a congested mess, but we still go too. Pictures? Ack! So many kids miss back to school night, seems like a weird time to take them. You're lucky there are strings at school! One of my grown kids played violin. We paid for lessons at the store and later in our home. I always wished he had it in school too.