When we got Mr. Sunny, Isaak's Leopard Gecko I was told by my student that had him, "He eats 2 meal worms every other day. He's afraid of crickets."

We found a few small crickets from outside, and tried to feed him them. They hopped around awhile in his tank, but he snapped them up when they slowed down. Now that he knows what they taste like, and has gotten over the fact that they are new to him, he loves them. He wiggles his tale all excited like, and snaps them up! It could be that my student tried to feed him too big of crickets. I'm not sure.

We were feeding him 2 mealworms one day, and a cricket the next day. He ate them right up. It got to a point where Isaak put 2 crickets in his tank, and de snapped both of them up!

I said, "We should read how much Leopard Geckos are supposed to eat." I was just kind of going off what my student said. Even so he still seemed hungry. He'd watch whoever had his food like he was thinking, Feed me!

Based on Sunny's length, he should have 3 meal worms one day, and 2 crickets the next day. Poor little guy was being underfed! It's kind of good we've been building back up his appetite. No one can go from not eating much, to eating a whole bunch more.

We also read that the blue sand he had in his tank before was bad for him. Geckos lick a lot. The sand could be poison to his insides. The sand can be used, for bigger lizards. It just isn't supposed to be used for little guys like Sunny. Most of the time in the desert lizards are on hard dirt surfaces. We got him coconut mulch, which is too big for him to eat. 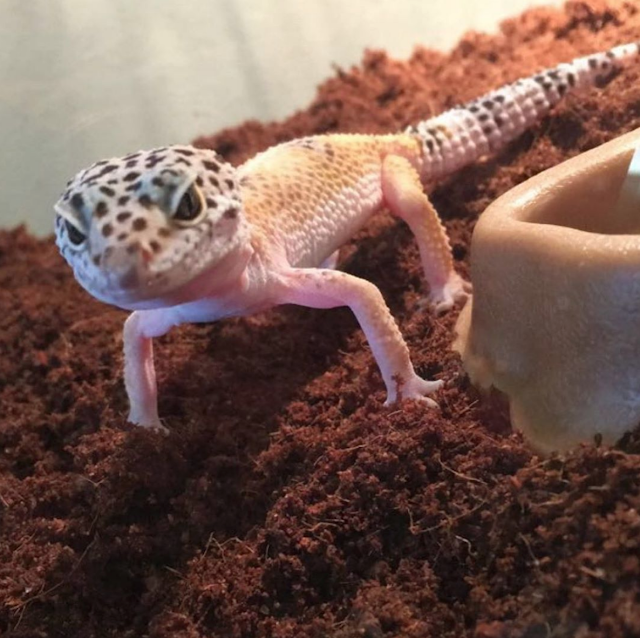 He's a lucky little guy you did all that research so you could find out about the sand and diet. The boys are going to have so much fun with him as a pet.

He is seriously the cutest! Good thing you did some research on his diet. Sounds like he was one hungry fellow!

Sounds like Sunny was rescued by the right people!

Jurassic Park!! He's seriously cute. I would be too scared to hold him. I am a total wimp.