Isaak Needs Glasses Sort of, Kind of, Not Really

Isaak's pediatrician said, "Isaak you look far sighted. Time to go get your eyes checked." I don't know how someone can look like they need glasses, but he's the doctor.

I called up Target to get him in, for an eye exam. They said the appointment would have to be a few weeks out because everyone was coming in to get their eyes checked with the close down from COVID-19.

I was so ready to cancel the appointment with looking for jobs, possibly having an interview or starting a job on the same day.

It all seemed to work out. We went in, he tried on a few pairs, but refused to try any more. He did play a prank on Mica. My idea! I shot a photo of him with a pair of glasses on, and sent it saying Isaak needed them.

I corrected his name from Isaac April to Isaak Apel.

Mica told Isaak during the exam that they stick needles in his eyes. He knew better. He has a fear of needles, so the thought made him nervous. Just puffs of air went into his eyes.

His eyes tested fine. His left eye does have astigmatism like mine. It's oh so slight. She put the stuff in to dilate his eyes, and said it would be a few minutes. She wrote him out a script, put it in an envelope, and handed it to me. The lady upfront had us pay, she said, "Goodbye!" and we were on our way.

Off to the tax man. We got some tax form just last month from the year before. What the heck? Aren't all those forms supposed to come before tax time? As we got to the tax guy, we got a call from Target, "Where's Isaak? The eye doctor needs to see him." I'm new to getting eyes checked, so when they said, "Goodbye!" I thought that was it. Tax man said the form was nothing to worry about. I wish they told me just to email them it, instead of coming in.

I ran Isaak back, after a major cleaning she was ready for him. He's fine. He should get his eyes dilated more! The boy went home, and slept like a baby.

I did mention to Isaak that I'd get him glasses if I got some to review. I did get a pair to review. The review will come soon. Get this...the prescription she plopped into an envelope had, "Isaac April" not the corrected "Isaak Apel". Then to order, they wanted a PD number. I had no idea what that is. They recommend a doctor figure out that number. Oh joy! We did our best to figure it out. Seeing they are closed. Travis deals with measurements a lot at work.

Here's a view of Isaak, with glasses:

He'll just wear them at home. 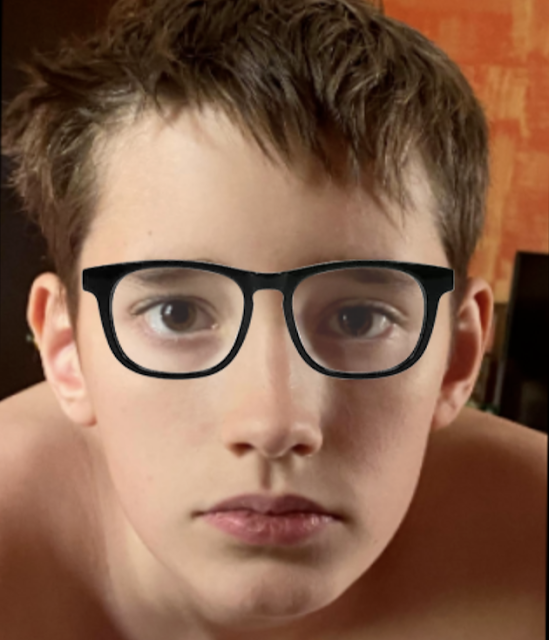 The "Free" pair of glasses ended up costing a bit with all the extras: Lens coating for finger prints, blue light protection, a cloth for cleaning, and shipping. It adds up! Hopefully they take his prescription with his name spelled all wrong.

As for me, I haven't even worn my glasses or rings, since COVID shut things down. I have 20/20 vision. I just have an astigmatism like Isaak. I get tired of my lenses fogging up with wearing a mask, and I don't want to touch my face if I don't absolutely have to. I wash my hands more if my rings are aren't on.

What about you? Do you wear glasses, or contacts?
Posted by An Apel a Day at 5:09 PM

Savannah had to get glasses. 1 eye is really weak...
Then broxton has a slight astigmatism so we ordered him some too..
I wear glasses... so it runs in our family ;)

Savannah had to get glasses. 1 eye is really weak...
Then broxton has a slight astigmatism so we ordered him some too..
I wear glasses... so it runs in our family ;)

Jason gets a reminder on his phone every week to call me to make an eye appointment. I hate going, so it's been months and months that he keeps texting me every friday to get the appt made. Then covid happened and I'm a little leery about going into those types of places unless I have to. I need new glasses, but for now my old ones work fine.

I think Isaak is cute with glasses.

I'm supposed to wear them but the only time I do is when it rains and I'm driving, or at night when I'm driving. I have always been far-sighted but now letters in books are starting to get reeeeally small too. :)

I can't remember how to do it but Firmoo's website has instructions on how to measure a PD.

Looking forward to your review. I prefer getting glasses in the mail if it's not time to get a new check-up.