Since cousin Emerson is in the hospital, we took cousin's Evan and Elijah in. 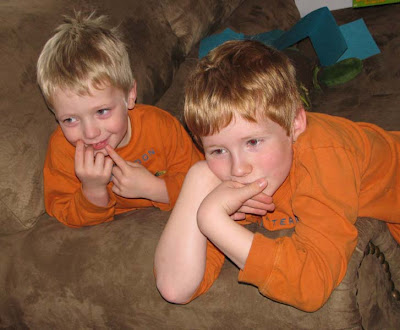 The night started with me picking up Evan at a friend's house, then Isaak and Elijah at Grandma and Grandpa Spiehs' house. I had a crock pot meal ready because I knew the night would be crazy. Daddy set up the tent in the living room for sleeping arrangements the night before.

After dinner we met one of my friends from high school and her family at the Y for open swim. A girl Mica goes to school with was there as well. I think everyone had fun. Isaak did get a little jealous because I was playing with other kids. I still played with him as well. ;) Cousin Elijah was big about playing on the side of the pool. He doesn't like not being able to touch the bottom. Cousin Evan was all about jumping in and splashing people. It must be that age, Mica does that to.

When swimming got over with, we came home and put them to bed ASAP. We had them say, "Goodnight" to their Daddy on the phone. Then their Mommy called to say, "Goodnight" as well. It was probably 9:30 before they went to bed! That's pretty late for them!

In the morning we woke up to a snow storm. I made a big breakfast: Banana whole wheat waffles, orange juice made from the juicer and eggs. They ate it down like their food was going out of style. Mica kept sneaking more waffles off the counter. I'm pretty sure he ate a whole waffle by the time he was done. Usually I only start them off with a 1/4.

20 minutes went by and they wanted a snack. They had a Banana Split.

At 11 they were hungry again. I decided to make a pretty big meal, determined to fill the boys up. I made Chicken Bitki, Daddy made Cauliflower and we had sweet potatoes. They again ate everything on their plates.

Sucky things: Emerson's had ups and downs at the hospital, today was a down day. Daddy, Isaak, Evan and I have a crappy cold. Isaak and Evan are in the coughing stage, Daddy's in the middle stage and I'm in the stuffy nose stage. This means no visiting Terra and Emerson at the hospital! :( Elijah was missing his Mom and Dad. He cried a few times for them. :(
Posted by An Apel a Day at 9:14 PM

praying for emerson to have a good day... i know the boys are loving their weekend with yall