Mica's now in Jiu Jitsu. We're waiting to buy him a robe, uniform, whatever you call it until he's done with one class. We wanted to know if he was really into it, or if it's just a passing phase.

For the meantime he's the one in the middle, with the blue shirt. 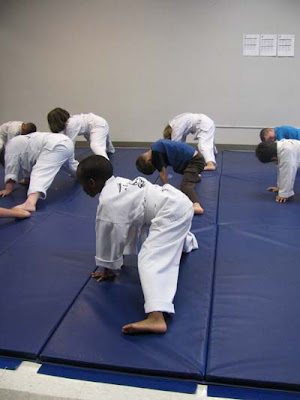 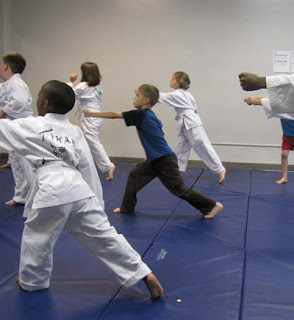 I have to say that he does love it. He is learning. The kid sucks at doing the monkey roll. Come on he's an apel, apes are in his genes right? He sticks his little butt up in the air and just has a hard time going into a roll. Maybe it's his forever long torso that he has trouble flipping over. I'm thinking it's fear.

If this were a college class, I think I'd make a prerequisite to Jiu Jitsu, a tumbling course for sure.

Now that Mica's in Jiu Jitsu, he thinks he knows his stuff. HA HA - NOT! Isaak thinks he's ready to take this class because he's four now. It is for ages 4 to 11. I'm thinking he'll start with tumbling.

I do have to say it's pretty cute watching Mica punch, kick and count to 10 in Japanese. He'll get the monkey roll down soon enough, I hope.
Posted by An Apel a Day at 2:10 PM

Looks like he has good form. It won't take him long to learn the monkey roll. Kids learn fast.... sometimes too fast.