Look For the Helpers 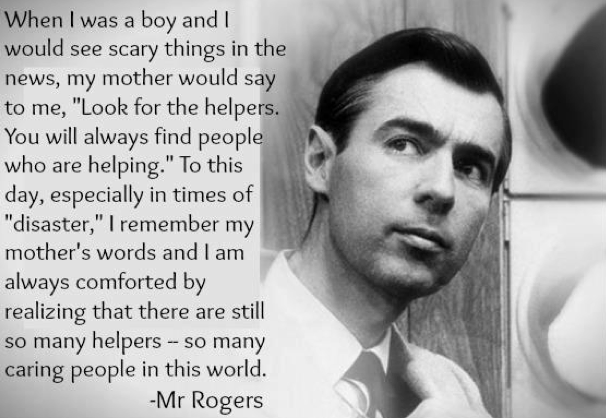 I wish I would have seen it earlier! We had a talk with Mica this morning about the tragedy that struck in Connecticut.

I had not heard about the tragedy until later in the day on Friday. I was worried about getting all of my grades done for the semester. When I heard about all the children that passed away, the grades that I was trying to get done all day suddenly didn't matter as much. Life matters way more than anything else.

We decided to talk to Mica and not to Isaak. Isaak's too young to understand death. Mica's really too young as well, but he's exposed to different things at school. We kept things brief with Mica. We made it clear that if he had ANY questions to come to us. He didn't ask much of anything. We figured he'd hear about it on TV, radio or at school. I do have to say that we don't have the TV on all the time. We watch it mostly when the kids have gone to bed. The radio however plays in the car often. We'd rather be open with him; letting him know that he could come talk to us. We told Mica to not discuss this situation with his fellow classmates. I don't know if his classmate's parents will or will not have discussions with them.

I like the quote of Mr. Rogers. Looking for the helpers in a difficult time is so important. The teachers that day were helpers. They protected their students. Firefighters, police and parents later were helpers.There are still so many helpers in this world.

If you don't know if you should or should not talk with your kids there are many sources out there. It's hard because even I as an adult can't understand everything that happened. I feel like it's just important to let my kids know that we are here to talk to.

I'm adding to this post. Just like I feel for the families that were affected in Connecticut shooting; I feel for the shooters family as well. Mental illness is real. I think we try and push it under the rug. Health insurance won't cover many of their meds. It's so sad! I read an article about a mother who has a child that is mentally ill. You have to read it! It can be found here.
Posted by An Apel a Day at 11:21 PM

How sad that shooting was. With TV today, our kids know everything that goes on in the world so it is so good you let yours know you are there for them if needed.

Like you, I didn't hear about this until much later. I never have the TV on during the day. Very, very sad.

Mr. Rogers comment is so wonderful. I do believe there are so many good people, more so then the evil people - hopefully. These teachers were definitely heros and I am sure they tried to protect their students as much as possible that horrible day. I work with teachers and know that they truly care about their students.
twinkle at optonline dot net

What a great post Alissa. I think your approach is absolutely the right one. It's so hard to know what to say in times like these.

this whole thing is heartbreaking...
our preacher had a sheet up front for resources to talk to your kids about this... but I was so emotional when I left that I forgot to stop and grab one... I just wanted to hold my sweet boy

Truly heartbreaking for everyone involved. And yet, Mr. Rogers is right. There are so many good, loving, giving, wonderful people in this world. I've been talking to many of them the past few days and it's done me a world of good!

We don't have the tv on either, but my 8 year old did catch it on the radio on our way home from gymnastics, so the talk was unavoidable. We kept it brief, but to the point, and I think she understood what we were telling her. I love the Mr. Roger's quote. I'll have to remember to pass that along to her if she should bring the subject up again.

There are no words to describe how utterly sad this is. My heart stops and breaks in a million pieces each time I think about it. Devastating!

I saw that saying too, and it stuck with me. It's very true, and I love it. Thank God for the helpers.