If you haven't participated in Portable North Pole, it's a must for those that believe in Santa!

First of all it's free. You just upload pictures of your kid or adult and fill out info on what Santa should say.

I kind of forgot about it. That is until Mica asked about it. He remembered it from last year.

A few days ago I got their Portable North Pole videos ready.

Santa doesn't say, "Mica" right; he says it more like, "MeeCa" with a long "e". I even tried, "Micah"; it's still said, "MeeCa". I put in that Santa would say, "My Friend". Mica's name is visually throughout.

With Mica's I put in that he's still on Santa's good list, but he has to try harder to not interrupt people when they are talking. Here's an image from Santa's book: 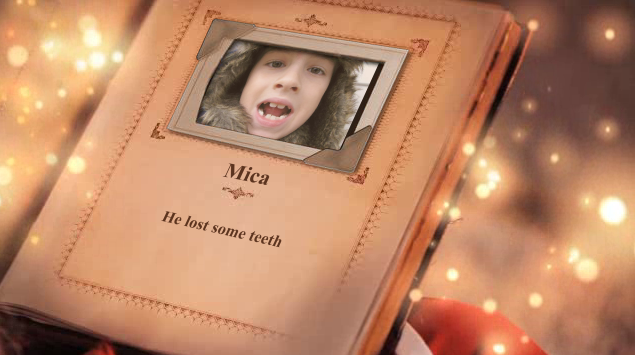 With Isaak I put in that he's still on Santa's good list, but he has to try harder to not sulk when he's upset. Then I explained what sulking is. You can't really type in what you want Santa to say for that; you just pick between different things. Here's Isaak's book: 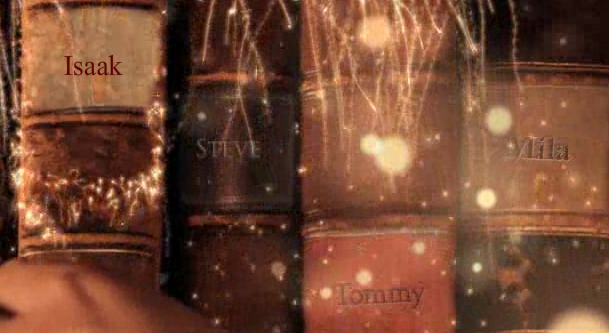 The boys totally loved it. They've asked to see their videos again. Their eyes light up when Santa says their name, finds their book and shows their pictures.

If you want to send one to an adult you can. Last year I sent one to Daddy and it said that he was, "Naughty" for not having the Christmas spirit.

This year I sent one to my co-worker. He was supposed to take photos of the student's movie posters. He had a student shoot a handful of images of himself. I had photos to work with. I had Santa say, "Your co-worker doesn't think you've done a very good job this year! You talk on the phone too loudly. You have to try harder to be a good employee." It was pretty darn funny! I had a few people in the office laughing when I showed it to them.
Posted by An Apel a Day at 8:50 AM

I've never heard of it before, but I'm going to try to make one for my daughter! Fun!

You are so funny Alissa. Sending one to Travis saying he was naughty. LOL... I should make one of those too.

Oh that is so cool. I have never heard of this site before, but I totally want to send a few to people that have been on the naughty list lately LMAO!

I have never heard of this! I am so going to save that link and do it for my daughter this year. She adores these kinds of things. Do your boys do the Santa watch too? I forget the exact name since that's my husband's thing to remember each year. It's where you track exactly where Santa is on Christmas Eve? My girls always get a kick out of seeing what country he is in all day long!

I've never heard of this either! How fun!!!

This sounds so cool! I never knew such a thing existed so thanks!

This sounds like a lot of fun. I bet the boys did love it. I remember a students of mine getting excited just visiting Santa on a website. This personalized message is even better.