The Little Punk Pooped On Me!

Last weekend I thought to myself, "I want to go see my lil' sister and nephews." I feel like I haven't been able to see them most of the winter because of my sickness or that sickness in our family. Now we are all well. Everything is good except for Isaak's emergency room visit last week. That's not contagious. I called them on Sunday and said, "Can we come over sometime today?" They said, "Yes." At 12 we were off to their house.

The boys played with their cousins. Terra and I hashed out what we were going to do for Isaak and Evan's joint family party. We decided that we're going with the ever popular mustache theme. My Brother In Law works at Oriental Trading Company, so he gets a deal and can pick it up, so we won't have to pay shipping. For the first time in my birthday party history (with my kids anyway) we're making cupcakes instead of cake. I couldn't resist these mustache toppers.

Almost the whole time I was there little Mr. Punk Emerson was sleeping. He hardly sleeps. That's a major problem at their house. I show up, and all he wants to do is sleep. 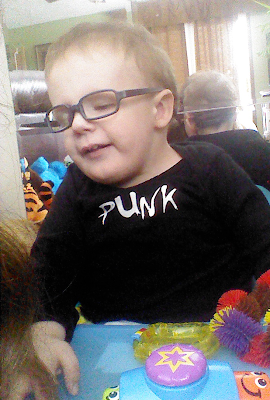 If you like his shirt, I won it at Snugfits when Isaak was little. They have the best shirts! I have to pump it up, I'm friends with the owner. Truly they wash up so nice though. They say some funny things to!

Finally Emerson woke up. I was holding him and he smelled. I didn't know he pooped. I just smelled a funky smell. I know they bathe him less because A) His skin is sensitive. B) He is going through chemo and under his shirt is all kinds of stuff they have to protect. C) He hates baths. I don't blame him. They literally have to put Saran Wrap on him to give him a bath.

The funk smell was poop. It smells funky because of the meds he's on. Up his diaper it went. I went to hand him off and my coat sleeve dragged into it.

I washed myself off. We had to drive home with the funk still lingering for 15 to 20 minutes.

Then my sister got threw up on and pooped on after I left. I think she took two showers that day.

Emerson is only on light chemo. Imagine what it would be like if he was on the nasty stuff!
Posted by An Apel a Day at 11:24 AM

I don't miss the poop up the back of babies days! When I start thinking how fun it would be to have another baby running around, that thought always stops me lol.

I do love the shirt!

I can't imagine chemo so young, and bet everyone is super glad it's only light.

I have to agree w/Theresa's comment. We never had big issues w/it all until the last one was born. Man, he made up for the others. lol

Oy - that used to happen ALL THE TIME with my youngest. He always pooped up his back. I mean like every time. It was so gross and I ended up throwing away so many of his cute outfits because of it because it was so disgusting that I refused to touch it again.

EEEEWWWWWEEEE..... My Granddaugher was here yesterday and puked on me.

ha! we have poop stories here too :) emerson is getting so big! :)