Isaak was taking a bath this morning. He decided he wanted to stay in there and play, and play some more. I told him to get out. He said, "Just a little longer Mommy."

I said, "Isaak you need to get out. Your fingers are going to get all wrinkly. You are going to turn into an old person." 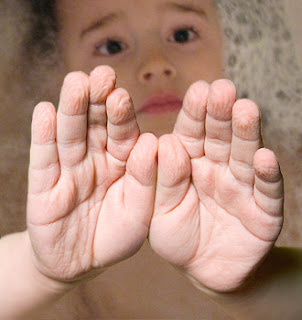 He stopped crying when I told him that his fingers would go back to normal; after that he got out of the tub.

That was in the morning.

At bedtime Isaak started crying once again. I was thinking his door got shut. He hates his door being shut. His door was wide open. I went in and asked him, "What's wrong Isaak?" He said, "I'm afraid of all the people I know dying and wonder what's going to happen to all their houses?"

I was thinking, Gee wiz isn't he too young to be thinking about these kinds of things? He hasn't watched any scary movies, no one has passed away in our family since the fall when Great Grandma Kent passed away. The only connection I could think of with his thoughts is me telling him that his bathtub wrinkly fingers would make him old. He was really worked up. I said, "Isaak everything is ok. You have nothing to worry about."

He then said, "That one Grandma died. Will my Great Grandpa die to? He's old." I said, "Isaak he is old. Just because he's old doesn't mean he'll die anytime soon. He could live until he's 100 year old, or more. We don't know when he's going to die. If he does die we'll all be sad, but he would have lived a very good life. He has kids, grand kids, great grand kids that all love him."

I told him that everything is alright once again, hugged him and he went to sleep.

I hope I didn't traumatize him with the bath tub wrinkly old man fingers.
Posted by An Apel a Day at 10:29 PM

He probably got it from school. My oldest went through a "death phase" around age 5 (or maybe 6) and I Have NO idea where he got it - but he seemed to know all about it. I blame everything on the kids at school LOL.

That is AMAZING that Isaak would be thinking of such things at such a young age. He is going to be a very deep person it seems. That's awesome!

That's pretty advanced thinking for him to extrapolate what you said that way!

Awww, I hate it when they go through the death phase. We haven't had anyone pass that my girls have been close to, but when our dog died we bought the book "What Is Heaven" by Maria Shriver. It really helped to put the girls in a better mindset about death and dying.

Girl...
I know what you mean about taking something and going with it..
I told Broxton I would love him until the day I died.... Maybe wrong thing to say to a kid... as he then started crying about me dying... and him not having a mom... and just all upset. nothing i could do to make it better. i finally told him i used the wrong word and that i would love him forever...

Isn't it funny how kids associate things and revisit them later in their minds?

He'll be fine, I'm sure, but it does pull your heartstrings when they're upset about nothing. :)

My son was also fascinated when his fingers got wrinkly in the bath, he kept looking at them. Isaak is definitely an advanced thinking child! But death is so hard for them to understand.
twinkle at optonline dot net

I do not think you traumatized him. It seems that the parents who do traumatize their children never seem to worry about it, but good parents are always worried about it.~Mary

From the sound of it he may well have been wondering about such things anyway, perhaps your comment allowed him to voice thoughts and fears he would have kept to himself otherwise.

One of the best pieces of advice I ever received on that subject was to say "The people who love you are going to stay with you and love you just as long and well as they can!" You've reassured them without lying to them by saying this. Relax Mom, he's at the age when they are just beginning to realise that people and things don't last forever, you haven't traumatised him.

Aww he's a sweet little kid. I used to like to soak in the tub until my fingers got all wrinkly too but I don't remember thinking about death that much because of it!

My niece used to think up things like this.... She grew out of it, but it took awhile.

Awww. Poor little guy. It's heartbreaking when they go through these types of things. When my middle child was young and learned about death, he cried and cried. Was always afraid I would die. I had to keep assuring him for a good while. Now and then he had set backs but hugs, talking, explaining set things back on track.

I hope you have a great Easter weekend Alissa!