Guess Where We Are Going Tonight?

Tonight we're going to Lion King on Broadway. I've been before. The kids haven't though. I know they will love it. I just think the costumes are amazing!

Watch out Friday though. I hope Mica doesn't fall asleep in class.

Julie Taymor is one of my favorite directors. She is truly artistic. She went to Indonesia to study their African culture. When she first took on directing Lion King, she wanted to incorporate many types of puppetry in it. She also was a part of making some of the masks for the musical. She's also directed Across the Universe, Frida (I so wish Salma Hayek won an award for that one!), Phantom of the Opera (I've never seen) and Spider-Man Turn Off the Dark on Broadway. Spider-Man I've heard has had many stunt accidents! It still has great reviews.

I wanted to make t-shirts for the boys to wear to Lion King. I kind of procrastinated a bit. I guess life got in the way. I wasn't expecting to be at my sister's house for Elijah's friend birthday party. That's when I planned on working on the t-shirts. She asked me to watch Emerson. Of course I couldn't say, "No!" I wanted to watch him. Plus it stinks that my go to place to buy fabric paint and t-shirts, Hobby Lobby right by my house and work closed! What's moving in? Walmart. I keep saying, "NO!" I had to venture out to Michaels, which is much farther away. They have way less check out people to!

I drew out 4 designs. One looked too much like the original Lion King image for the broadway show, and too Egyptian like. I kept telling myself, "Think African!" I did like the cubistic quality though! I wanted my own style though! 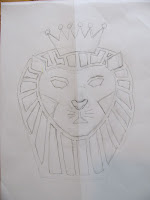 The next one looked too much like the lion in the Wizard of Oz. 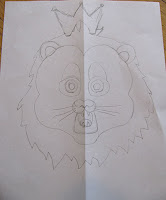 The next two I liked, but fellow artist friends told me that they looked too itty bitty kid like. They were the most unique though. 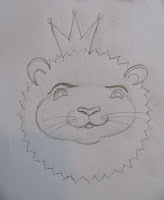 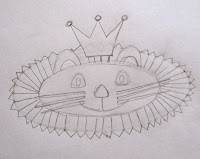 Everyone liked the 1st design best. I had to use it, but tweek it; to be my design more!


Mica picked out yellow shirts. Usually I'm not a yellow person, but in this case the color worked really well! The crown has rivets on the top. They do make gold fabric paint; I used for the crown! 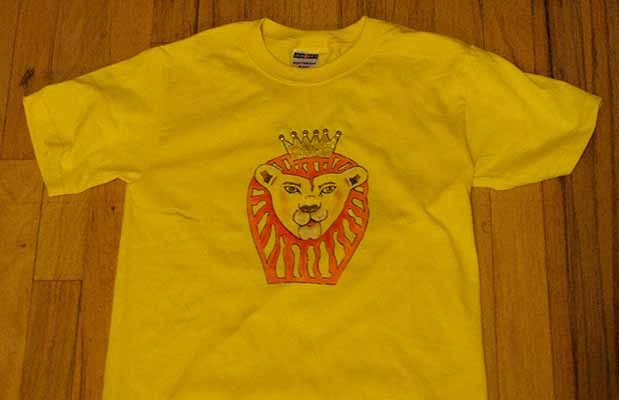 The boys weren't exactly excellent models this morning. I wish they could have gone with no long sleeve shirt underneath. It's kind of cold this morning though! 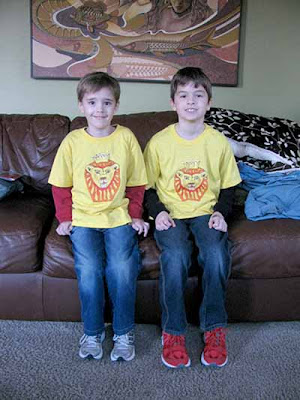 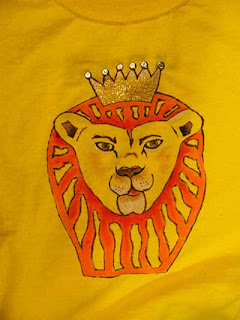 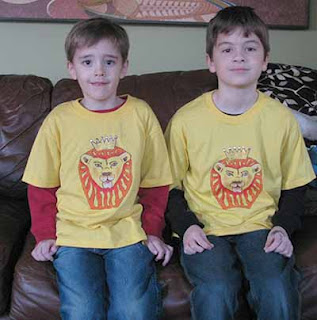 Have you been to any broadway productions?

The shirts turned out fabulous! I think that it's neat the boys have their own custom shirts to wear to the play.

I am super jealous you get to go. Lion King has been on my list of Broadway shoes I must see! Have a great time at the show!

The boys look great in their t-shirts. I have always wanted to see the Lion King on stage, so I am looking forward to hearing how you guys like it!

You need to be selling your creations on etsy or somewhere like that. They turned out FAB!!

I would love to see that also. Your designs are terrific too!
twinkle at optonline dot net

it turned out great!!!!
i am glad you went with the first one, as it was my favorite too...
way to go...
im sure people are going to wonder where you bought it at tonight at the show :)

wow the shirts are great! how was the show??

Hope you had a wonderful time tonight! Love the designs and the tshirts turned out great. =)

Great looking shirts! Lion King is my one of my favorite Disney movies so I'd love to see it on broadway.
We've seen a few productions off broadway-one was Wicked. I had the best time at each and as soon as we can I want to see more.
Have fun!

These shirts turned out great, love Lion King :)Thanks for sharing with us at Creative Mondays ..,