School summer that is. June 20 or 21 is the official first day of summer. I always thought it was the 21st, but someone last year told me that it depends on the position of the moon. My birthday is the on the 21st, so I was bummed to hear that it's not the official start to summer.

What to do with the kids for the summer?

Mica's already saying, "I'm bored!" on the weekends. It's annoying because he has a room full of stuff to do. I want to say, "Seriously?"

I wanted to keep Mica busy with camps, but he's not old enough for some of them just yet. One more year!

Today I decided on a new rule for the summer: If they whine about a task I give them (Mica's more of a problem with this) then they get more to do. If they do not complain at all about the task at hand, then they will be give no more tasks. Does that sound fair?

I've thought about starting up the chore jar once again. I never really followed through with it before. I just put a lot of tasks in a mason jar, and the kids pull one out to do. For some reason when I tried it before it never stuck. They are older and more capable now. I told Mica that his tasks are going to get harder, and Isaak's going to get some of Mica's tasks.

I've been trying to give Isaak tasks that help prepare him for Kindergarten today. It was cloudy this morning, so Isaak helped me make banana bread and no excuse bread. Isaak peeled all the bananas. I know he'll have to do this task at lunch time. He'll also have to make his own PBJ sandwich. I'm surprised the school even offers PBJ sandwiches with all the nut allergies. They do. They give the kids their own little container of jelly and peanut butter. The bread comes separate. Here's Isaak making his own and Mica's sandwiches: 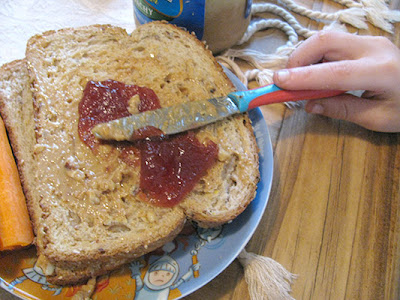 Trust me it's not all work. This morning we played the game Trouble. Isaak had a little problem with the trouble part of it. He kept going back to start. I'll be excited when the water pads open up. It's too cold for that yet. Soon we'll be going to South Dakota. Shhhh...the boys don't know about that one yet. We rented a cabin in the middle of no where, we're going to see a lot of sites as well. I won't announce when we're leaving, but I'll certainly tell you all about it when we get back.
Posted by An Apel a Day at 4:03 PM

My daughter did camp when I was working and she LOVED it.

I'm surprised peanut butter is allowed in the schools too.

My son's K teacher has one child a day bring in a snack and show & tell item. She lets them bring in homemade things, I was surprised about that too (everything in Florida had to be pre-packaged or wrapped).

My Daughter used to say the same thing. I'm Bored !! I used to tell her she was BORING!!

Our summer break isn't for 2 more weeks. I am not looking forward to it. I have also been thinking about summer camps and my oldest wants to do photography and acting. I like the acting one because it will force her to come out of her shell and interact with more people. She is very shy!

I think the chore chart is great. I've been making my kids to chores every day after school. 2 each. Easy things like take the laundry to the basement and feed the dogs. During summer it bumps up to 3 or 4 depending how busy we are. They get the weekends free from chores though.

My kids don't get out until June 27th this year. They had 5 snow days tacked on, so it's a week later than they were supposed to get out, but every year I ask myself the same question.....what am I gonna do with them all summer. LOL.

i wish we could do camps.. but they are like over $100 for a week.. and that is like 3 hours a day...i just think it is too much... or maybe i am just too cheap? ;)
wow,i am surprised about the pb&J - broxton was not allowed to take pb&j to preschool this year because of them being a "nut free" campus.