During the last testing in Jiu-Jitsu we chose to hold Mica back. Daddy didn't see him working at practicing as much as he should. Mica was mad at us. Other kids tested that probably should not of tested as well. We're paying for him to go; to move up we want to see him working at it.

He's been working at it ever since. That's really the lesson we wanted to prove.

In some cases all kids get rewarded. Mr. Rodgers talked in his show about all kids being special. I do believe in that.

He also said, “I hope you're proud of yourself for the times you've said 'yes,' when all it meant was extra work for you and was seemingly helpful only to someone else." I know Mica didn't practice getting his second yellow stripe for only someone else, but he did practice extra hard to get where he wanted to go.

I feel like in today's world we're lacking in hard work. Kids often think they get something for nothing.

Sensei says, "A black belt is just a white belt that never quit trying." I believe in that to.


Can you see Mica's smile? He was proud of himself. As a Mom I'm not a super sap, but I felt like crying happy tears because I knew that Mica worked for that stripe.
LOL at the boy in the background that is bored. 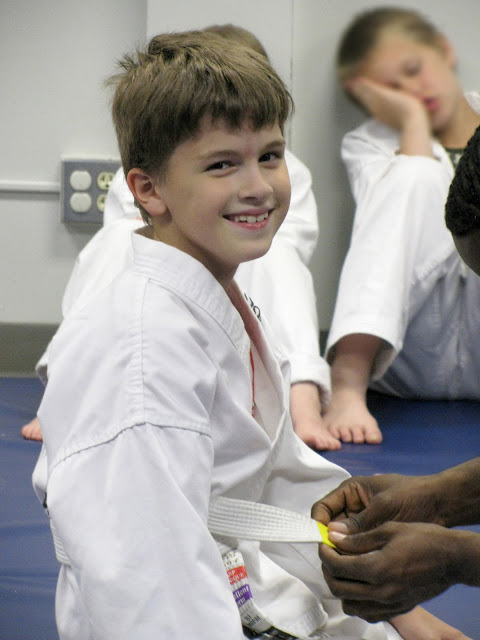 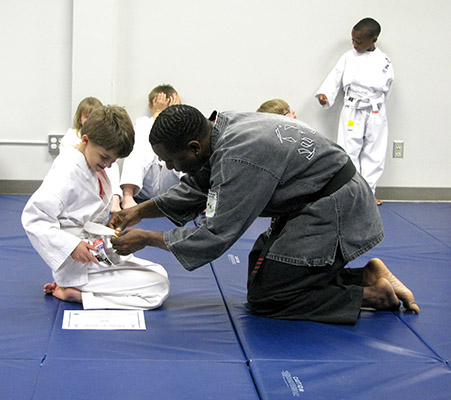 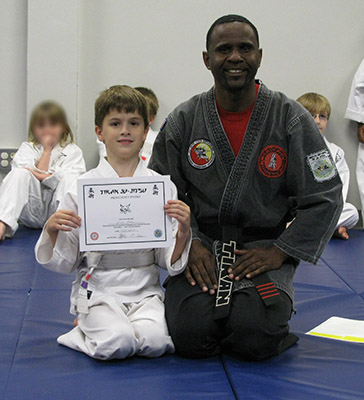 I agree with you guys. I would have held my son back from getting a stripe if he didn't practice his forms, too. Luckily I haven't had to hold him back at all yet because he loves to practice - even when he shouldn't be (like in the grocery store lol), but I think that was a good move on your parts. He needs to learn responsibility and that's part of it.

You absolutely did the loving thing in holding him back. Now he'll know how to work to achieve his goals :-)

Good for him working to get that achievement! And kudos to you for holding him back. Sometimes that is a hard call to make, but I definitely think it was the right decision.

You must have done the right thing in holding him back. He looks very proud of himself.

I hear you with the kids thinking they should get something for doing nothing.

The tough decisions are sometimes the best ones, yes? :)

The pics are great, and congrats to him!

Well done on making him work for that belt--and now he is doubly proud because he knows he really earned it!!

You are very wise parents. My ex-bf Don practices Aikido, as do his sons. It takes a lot of practice..there is no other way than to Work It.

That's great. Congratulations to Mica for earning that belt.

I know what you mean about this entitlement thing - My son's band teach rewarded the kids that practiced. My son Ryan didn't give it much effort, yet he is getting a little something....which he probably shouldn't....he hardly participated. That's how the entitlement thing starts. At least I am aware of it. I guess that is the first step - now to make him aware of it!!

Awesome job! I agree kids now days think they get something for nothing. It is great that Mica worked hard. I was once a teacher at a school where at the end of the year EVERY student got a trophy. Sometimes it was very hard to come up with a trophy title because the child did not show academic excellence or citizenship. Every child had to get one though. It is the world we live in.

Glad to see you didn't succumb to the "everyone wins" deal. This looks like it helped the child to appreciate the skill that he's learning and focus more to achieve and overcome a goal.

I think you made a wise choice and your child will benefit from it in the long run. Great job to both parents and Mica!

That is so awesome! My son did karate for 3 years and every time he would get a stripe or a new belt I always got teary too. It is such a great feeling to see your children accomplish things.

I love seeing kids in Martial Arts!! My son started Tae Kwon Do this last winter at the age of 4! It's been amazing the changes he's made since starting...it's great! We will start our daughter next Spring when she turns 4! I would have done the same thing and made him wait till he worked for it :)