We've mostly I've been picking Juneberries. They come from our Service Berry Bush. It looks more like a small tree, than a bush. In some ways I wish they were all ripe and ready to pick all at once. They taste good in pies, crisps, muffins, pancakes, yogurt, jelly, jam, and on their own. I've never seen them in the stores though. It's probably because they are such a pain to pick. 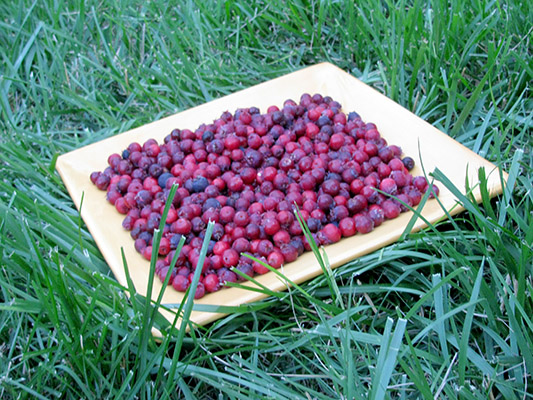 These are what I picked last night after swimming lessons. I have bags of them in the freezer. On Friday Aunt Terra and I are going to make Juneberry Jam. I've already made to Juneberry Crisps for our works.

I tried getting the boys to help. This is what happens:

Isaak: "Is this one ripe?" After his picks it. This is with every berry he picks. Then he proceeds to throw grass into the berry bowl.

Mica: "I'm board!" After picking 35 berries. He dances around in circles more than he helps.

Sigh! Someday they will be better helpers with berry picking. Until then I'm pretty much on my own. 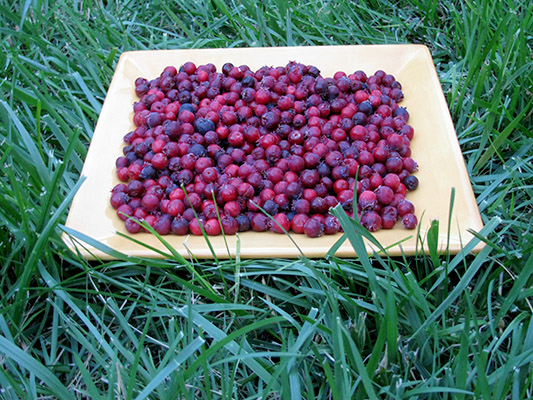 I don't think I have ever had a Juneberry. Not sure if they even grow here. We have been mulberry picking here. They don't sell those in the stores, so I take large baggies with us and load up on them when I can!

I've never even heard of Juneberries. We definitely don't grow those, or even import them around here that I know of.

i have yet to see them... but we do have blue berry bushes at our new house :)

I've never heard of them. We love berries here too.

I bet your boys like being with you while you're picking, even if they're not much help yet. ;)

Never had a juneberry. We have a lot of wineberries.

I have never had a juneberry, I would probably like them though. There isn't a berry I don't like.