Isaak is doing what Mica used to do. He's being a total pill in stores. I talk to him about store behavior. That works for maybe a minute or two. He's not a bad kid really! Something in stores makes him want Mica's attention. In order to get that attention, he tries to get it in a negative way. Isaak wants to rough house with Mica right in the middle of the isle. He laughs and kicks him. That doesn't work for me of course. I keep telling myself, This to shall pass. Mica once acted out running from me in the stores, and laughed about it. Now he walks very nicely by my side. That is unless Isaak has him going. I tell ya this is when just having one kid is much easier.

I remember when Mica was younger/in this stage; he ran off once, laughing, and hiding behind end caps. Isaak was in the front part of the cart. I ran up, grabbed Mica in the football hold, kept caring him like that, while pushing the cart. Mica yelled out, "Don't spank me Mom!" We had a book called Just Shopping With Mom. In that book the boy gets warned to have good behavior; otherwise he would get a spanking.

My times have changed! I think when Mica said that; all eyes were on me. I'm sure some people thought, "Way to go Mom!", while others were thinking, "Spanking is awful!" I'm not one to judge how others punish their kids. We just don't spank at our house. We've found that other ways to punish works for us. Even at a young age of 2 Mica used to sit in the time out chair and discuss the negative thing he did, and how he shouldn't do it.

When possible we try and match the punishment with the crime. We've taken Mica's bedroom door off its hinges a few times for slamming his door. When Isaak has written on things, he's had to remove his scribble.

Yesterday I was at my wits end with Isaak. He was not listening AT all. I think the boy had more time-outs than he had in a whole month. After our errands, Isaak was allowed to go potty, eat his lunch then he was in his room for a LONG time. I was going to let him out, but he kept yelling, "Mom this is your fault. You are mean to me!" To me he wasn't owning up to his mishaps, and needed more time to think.

Daddy came home and said he had a surprise for Isaak. He would only give him the surprise if he cleaned up his room.

What he didn't know was that the surprise was hard labor for a little guy. We weren't letting him off the hook.

Isaak had to move some mulch and take care of some branches. 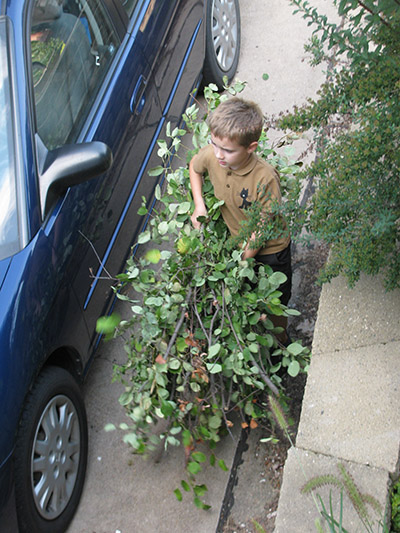 I'm hoping the next shopping trip is better. Crossing my fingers.
Posted by An Apel a Day at 9:04 AM

I've been told I gave my parents a lot of stress when I was little lol. I suppose that'll come back to me in the form of Karma when I have kids. BTW I finally figured out how to bypass Blogger's limit on the maximum number of blogs that one can follow. So I am finally following your blog now :)

We don't spank either. I just finished reading 123 magic and so far it seems very effective.

I used to get a smack when I was a kid and being a pain. I very seldom had to disipline my Daughter but I do remember when she was a teen and mouthing off so much my hand just flew out and smacked her. She was very surprised because I never hit her. I had just had it that day and enough was enough. We laugh about it today.

i LOVE that the surprise was hard work :) we have done that a few times as well...

Allison was a HELLION at Disney. The worst attitude she has ever had. She usually has 2 chores a day, but that doubled for the rest of the year (2 months). Now we remind her that chores double when you act like a brat. Usually work. However, another time she started her bad attitude about 9pm. Screaming, coming out of her room, saying horrible things. By 2 am I was super pissed. Finally I told her I would spank her if she didn't let us sleep. Walked out of her room and she screamed again. I swatted her leg to make my point. Then she spent the next 2 hours screaming "I can't believe you hit me!" That was a loooong night!