WW: Creations of the week {Linky}

Isaak had been making hand made puppets. He made them for Mica's friend birthday party that was on Saturday. I don't think Mica appreciated all the work that went into them though. Older brothers can be like that some times.

Some have googly eyes, some have marker eyes. Then he tore apart  popsicle sticks to to hold them up; attached them with tape.


I just love his creativity! 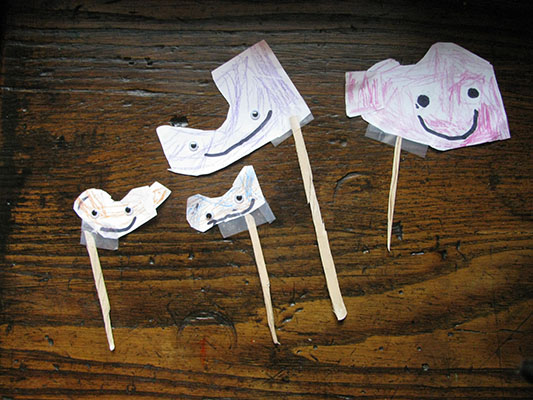 I made a Teenage Mutant Ninja Turtle Cake for Mica's friend party. I was going to make his scarf/mask thing red. I guess Mica doesn't like that turtle as much as the others. To me it's cake. It all tastes the same. I guess in a kid's world it matters. 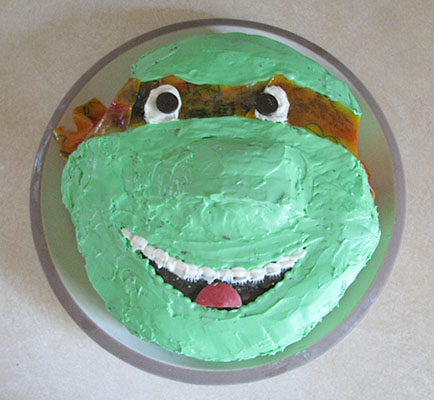 The cake was 2 round cakes layered on top of one another. I don't even frost between them. I just let the freezer stick them together. The sides were slightly cut. The cut pieces went on for his nose area. I used an orange fruit roll-up for his mask, dark chocolate ships for the eyes, 1/2 a red candy melt for the tongue and the rest was frosting.

I just always thought TMNT were an odd mix. What's usually considered slow turtles are ninjas. Then they like pizza. It's all so odd to me. My boys love them though.

What did you make this week?

Please take a moment to enter the Rock N Learn DVD Site Words DVD giveaway.
Posted by An Apel a Day at 3:00 PM

hi Alissa! Yes, water is the best! I never have a problem with my body or mind when I choose water to drink. Others things, ya, = problems. hahahaha.

You children are so dang imaginative!

ooops, *your* not you. I spotted that error just as the publish took hold, dang.

Love your son's creativity. And the cake is great. I must be odd, I liked TMNT growing up. Though I never did think about how odd it all was.

LMAO @ that cake as I scrolled down

Isaak is very creative Alissa! Lovely cake. That party must have been great. Thanks for hosting.

That's an awesome cake and Isaak did a great job for the puppets too :)

LOVE THE CAKE! My son is standing over me going "me, me, me mommy make me one!! "

Very funny, yes, sure you have a good time! Nice pictures!

That is an awesome cake!

That cake is awesome, and aww to the masks, that rocks!

The cake turned out really good! I bet it tasted yummy too! Loving the masks. They really are so creative, aren't they? Must be from all those clinics you take them to on Saturdays :)

I think the cake turned out nicely! Great idea to use a fruit roll-up for the mask!

You look like a great mom, doing all that for their parties! :) Great memories for sure!

Love the cake, A.

The cake looks good..haven't baked anything yet this week but am looking to doing cookies.

Oh wow - you did an AWESOME job on the cake. Wow.

Hari Om
Hi Alissa and wow to the creativity of mum and son!! I love that you made the cake and didn't order out. It reminded me of what mum used to do for us... Lovely. &*>

I like Teenage Mutant Ninja Turtles, the original ones back when I was younger. I don't like how they look now in the new cartoons.

The handmade puppets are cute. At first, I thought they were having a masquerade party until I read it ;o)

You did a wonderful job on the cake!

loved TMNT at a kid.. and yep, broxton loves them now.. great job on the cake

I think it's sweet that you made the character he liked better! Great job!

Wow now this is a super cake, aww I remember my 16 year old loving them :)

Very cool cake! You always amaze me with what you come up with.