I haven't shown my nephew Emerson in awhile. Many older readers know about Emerson. I do have some newer readers that do not.

He was born with Trisomy 18 AKA Edward's Syndrome. In the hospital babies born with this, and Trisomy 13 are called, "Incompatible With Life". It is because many are born with a hole in their heart, in their brain, or have other severe issues.

I could get into all the stuff he has had done, he's doing pretty good, so I'm not going to. He will have to get an MRI on the 10th for an eye surgery coming up.  It's to double check if there is fluid on the brain, but he has no other symptoms to go along with that. It helps that we have many nurses in our family that know what's what.

Emerson has been practicing being in the crawl position, sitting and in the stand position. One fun thing I got to watch is him playing with a car. Isaak pushed the car towards him, and Emerson pushed it back. He thinks his brothers are funny to.

The only thing he's missing in these photos are his glasses. They do help him see better, but they fall down a lot. 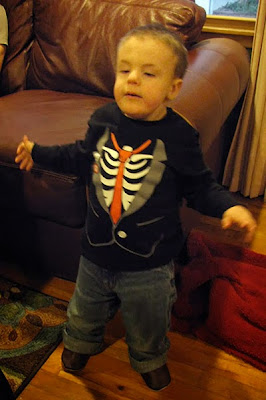 He stood for a few minutes. Then he got excited, and started to tilt off to one side.

I hope the mri goes well. He is so cute.

Awww how heartwarming!! You go Emerson!! :)

I'm glad he has a loving family to take care of him.

It's so funny because the picture came up in my reader first and I was thinking "wait, where are his glasses" LOL. Look at him go! Yay, Emerson!

You go Emerson! Good luck with the eye surgery!

He is cute and so is that shirt!!!

Are there soft straps (maybe with Velcro?) that could help him keep his glasses on?