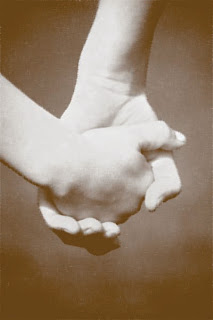 Daddy decided to go meet up with Isaak at school last Friday. He wanted to see how Isaak is with his classmates. Especially since the teacher said Isaak follows one girl around all over. A boy makes fun of him for having a "girlfriend".

Daddy ate lunch with the lil' man, and went out to recess to play with the kids afterwards. Daddy said, "I was the cool big kid on the playground. All the kids wanted to play with me." I was laughing. He's "cool" now. Back in the day he was picked on just like many other kids are.

Do you ever think that it would be nice to have one adult play with kids on the playground? I think this would help kids to get along. I know teachers are out there, watching, but not playing along with the kids. Just a thought I had.

Daddy was playing tag, all the kids were trying to catch him.

Isaak has a new kid in his class. Isaak was happily running along the playground like many of the other kids. He was running holding hands with the new girl, and another girl was holding his other hand.

What can I say? He likes the girls. Kindergarten drama! At least he talks about a few boys as well.

Just curious what did you get picked on for when you were a kid?

I got picked on for being shy. I just had trouble opening my mouth back then. I was so shy, I wouldn't even order food at a fast food place. I would have thought I would have been picked on for needing special help with reading and math, but I wasn't. In upper elementary I was picked on for having a bra early. A few boys snapped it. It was so embarrassing then. Now I'd just turn around and punch them.

Daddy got picked on for being skinny, being the new kid {he moved schools once}, and being shy as well.
Posted by An Apel a Day at 11:22 AM

I didn't get picked on. My father raised me to fight at the drop of a hat or the merest intimation of an insult. The 1950's were very different times.

How nice that daddy could do that with him. Around here, NO ONE gets into the schools without a background check and even then, you can only be a volunteer in the classroom. No parents are allowed to go in for lunch or to play with the kids at recess.

I think there should be a teacher or adult around. Kids can be cruel just because they are learning. So indeed that would make a lot of difference.

i bet travis loved being the cool kid... lol, you should have seen marc at broxtons party :)

I got picked on because I always had my head in a book or writing in my journal :)

I love the idea of having adults play with the kids. Way less drama would be going on!

I got picked on for my nose. It was compared to a pug half the time, and a ski slope the other half lol,