We had a pretty low key weekend, how about you?

On Friday night we went out to hand out flyers for Daddy's gallery. Every year he is responsible to have new artists apply, and get in to show their work. He's a mentor, and a judge both.

On Saturday the boys went with Daddy to work. They demolished our old toilet. Pictures and video will be coming for that for my WW this week. Let's just face it everyone likes destroying things that they want gone.

We took them to Barnes and Noble for their Lego party. It was just ok. To be honest I was disappointed. They got an activity sheet, a cookie and punch. Then they were told once they finished it that they would get a prize. Well the prize was a Lego movie poster. The boys were expecting a small Lego set. Mica said, "Really this is the prize?" I had to, "Shhhhh..." him. I said, "Mr. you can be thankful for whatever you get!" 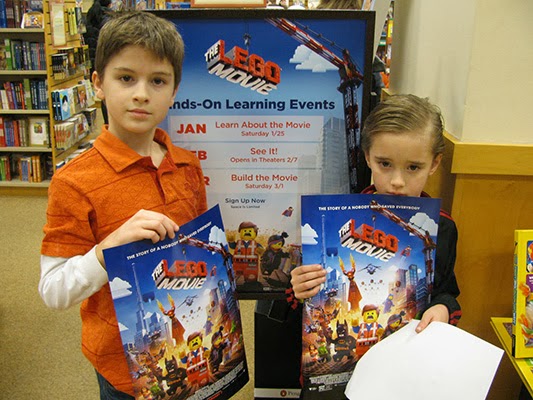 We moved on. At home we found a lot of left over Valentines they had throughout the years. Why they put 15 in a box is beyond me. Most have 20 something in their class. We always have to buy 2 boxes, and have left overs. They decided to put some Valentines together. I have to say that I have always wanted to make my own Valentines. Characters that they like end up ruling. Candy ends up ruling to.

I wanted the boys to make these for their classmates:

Mica said, "Where's the candy? I want to hand out candy! I don't think those will fit in everyone's Valentines boxes Mom." Isaak said, "I don't get it." The boys won. Mom lost.

What about you? Have you ever made Valentines as a kid, or with your kids?

As a side note: I'm a featured guest writer over a Sakura Haruka. Go check it out. It's a post about how we raise our children here in the US. You can tell me if you agree with what I wrote, or not.

Haha, my little man would have said the SAME thing...that is a little disappointing especially for such a big store.

I saw your guest post yesterday, that was awesome!

I like the rulers. My kids would want the candy too, even though they just let it sit around. We still have Halloween candy in the house.

Oh yes I often made Valentine's as a kid to woo a girl :)

It's like those cupcake sets. Why do they put 12 in a cupcake set, when most kids have 20 in their class?!?

It's like those cupcake sets. Why do they put 12 in a cupcake set, when most kids have 20 in their class?!?

we don't usually give out gifts to classmates for Vday here.. I think the trend starts only in their teens when they realise about it's significance and want to show love to their classmates on their own :)

OMG, they look downright pissed over the poster. Rightfully so too. Who wants a stupid poster!?

Hahaha... Leave it to a kid to tell the truth. They really could have done better than that.

broxton made his valentines last year.... just because... but this year - star wars is taking over and that is what we are going with :)