I went to pick up the boys at Grandma and Grandpa's house sometime last week.

Isaak was coloring this: 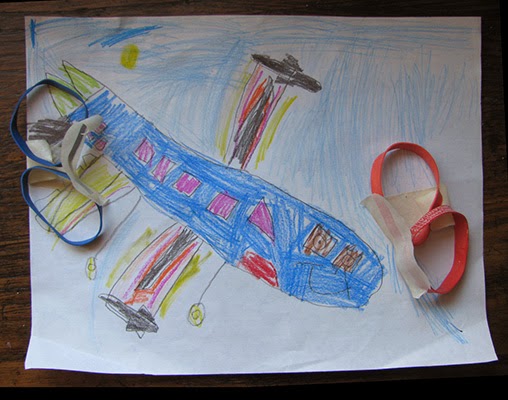 It's cute right? Me and a lot of other people thought so. I said, "Wow Isaak that's a really good drawing. I love it!" He smiled and said, "Thank you!"

Rubber bands are his thing. He puts them in almost everything he does. He's a collage artists, or a sculptor. Not really an illustrator per say. We'll see. He may loose interest in the arts all together like his big brother Mica did.

I posted his little master piece on Facebook. People thought it was cute.

Then the other day I said, "I really do like that airplane that you created."

He said, "Ya I just colored it, and added the rubber bands. I found the drawing in Grandma and Grandpa's closet."

I guess there's nothing wrong with what he did. It's no different than him coloring an image out of a coloring book. It's just that I should ask him next time, "Isaak did you create all of this?" before I claim it's my son's work.

My guess is, that it's my oldest nephew's drawing, and Isaak's coloring.

Isaak needs to sit in on one of my copyright lectures. HA HA When you think about it most works are from something inspired by, or something changed from something else. Does that even make sense?

Dale Chihuly hasn't blown his own glass for years, and his work is in tons of art galleries. He's estimated to be worth $10 million dollars. He draws what he wants, or tells glass blowers what he wants, and they create it for him. Then he decides if he wants to put his name on it.

Andy Warhol didn't like getting messy. He to had others paint, and do screen prints for him often.

Visual artists aren't the only ones that steel, or borrow from others.

Weird Al Yankovic has borrows from others all the time. Beat It became Eat It. He's found himself in trouble with the law a few times. He's always been let off.

The beloved Disney most certainly takes what they can get for ideas. You'd think with their movie Beauty and the Beast, and the musical that they came up with, that it was their own idea. No worries, it's an old story, so they had full access to it. Now if you think of Beauty and the Beast you think of the Disney movie, not the classic story tale.

The singer, song writer, piano player and creator of the Lilith Fair Sarah McLachlan had to go to court towards the beginning of her career because she copied her stalker's words in a letter he sent her. Many mistook the song Possession as passionate love song. When in fact many of those words came from her stalker. She went to court only to find out her stalker had hung himself.

What is original anymore? It's difficult to define. Especially when you're an art teacher. You want works to be original. It is true that designers are given copy, and photos to use to get the job done. It's also true that big named, fine artists hire someone to do the things that they don't want to do. Then they slap their name on the work, as if they own the whole thing.

If I have problems defining original works. Try explaining that to a 5 year old.

By the way I'm not bashing these artists. Sarah McLachlan was once my favorite singer.
Posted by An Apel a Day at 3:37 PM

Weird Al is the best, though. He copies artists in good fun, so I think in certain cases it's ok.

This really makes you think, huh? That's a bizarre, yet sad bit about the stalker.

the glassblower and warhol? MIND BLOWN. I had no clue - I would LOVE to sit in on your copyright lecture...