I forgot to put this up. I made this invite for Isaak and Evan's birthday party. I thought it was nice not having something superhero like for once. Isaak loves being outdoors, and Evan got what he wanted for his friend party so we went for it. 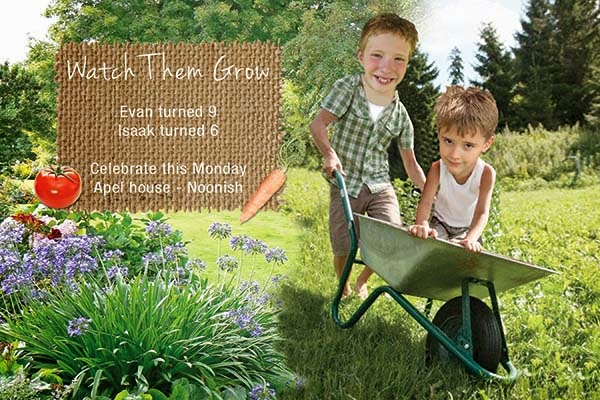 Their bodies are not their bodies. There's two backgrounds here, burlap for the sign, veggies added, and the boy's heads. Yes they look odd. They are supposed to. They are collaged that way.

We had a taco bar. Collard Greens were out for those that didn't want gluten. They work pretty well for wraps. Now Grandma told me that they make gluten free shells. We had homegrown corn. Then all the toppings. Grandma brought a relish tray, Aunt Terra brought a watermelon, and Aunt Angela brought salsa and guacamole. I made gluten free brownies, and brownies that were not gluten free. Isaak likes them more than cake. Terra brought a rhubarb pie. Then there was all kinds of ice cream. I had rice milk ice cream.

I put little flower pots at the tables, with the silverware and a napkin in them.

The kids played, and played.

Isaak got a rainbow loom from Terra, big wooden letters for him to decorate that spell out Isaak, more craft stuff, money and Lego sets. He scored big.

This is the face Isaak makes when he can't open something easily: 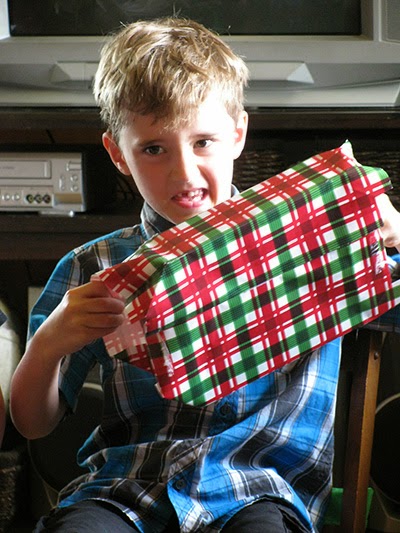 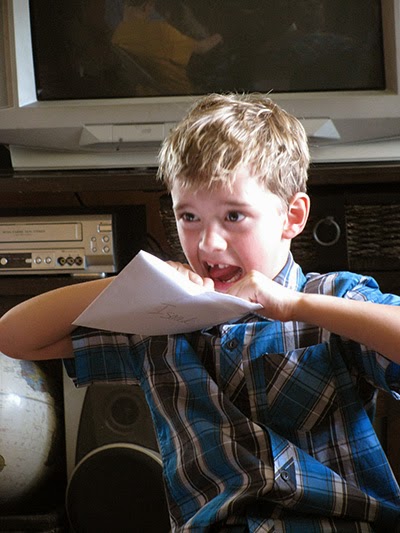 I like the invitation card! Never tried rice milk ice-cream before.. is there a strong taste of rice there?

So cute! I love seeing your sons having a 'real' exposure to life. So nice to see you at my post today, too. I'm trying to catch up with everyone, it seems. But my energy is back and I am one happy gal.

I love the collage and I think it came out wicked cool!

The invitation is so creative! I love it!

A good time was had by all. I like your collage, it looks like it was done by a professional!