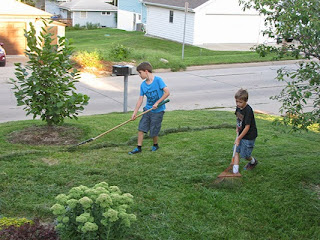 They did look so excited to get that water on them, lol. I love that you let them participate.

We have issues with my little man focusing and he loses privileges like tv time or time with his tablet.

ha ha why are they jumping up and down so much do they have ants in their pants omg and that mother has really let herself go it should be a crime to subject 1s children to that! LOL!

I loved their bucket challenge!

I hate common core. I make Jason do math with the girls.

I heard about the Cops incident. So sad, but it always infuriates me when the family starts whining about their no good family member that gets themselves killed. Here in IN a few months back and officer got out of his car in pursuit of a suspect. The suspect shot and killed the officer and the family had the nerve to say "The officer should have stayed in his car and he would still be alive." No, if your pos family member weren't such a thug, he'd be alive. Of course, family is whining about the thugs punishment too. Ridiculous!

I am SO NERVOUS for common core math... but for now, we just deal with the homework that kindergartners get :)