Mica's a bookworm. He reads and reads. If he doesn't have a book in his hands, it's a Lego magazine. He also plays with Legos.

I remember when he was just a little tike he'd sit and let me read to him. I had books memorized; we read so much. Reading, and movies are the ways to keep Mica still, and relaxed. Otherwise he was in constant movement. With movies he now reads the credits, and the case. He knows information about those actors. He'll tell you his favorite director is Steven Spielberg.

Weekly, or every other week we go to the library's website, and put books and movies on hold.

Last Thursday I picked up 5 books, and Return of the Jedi. 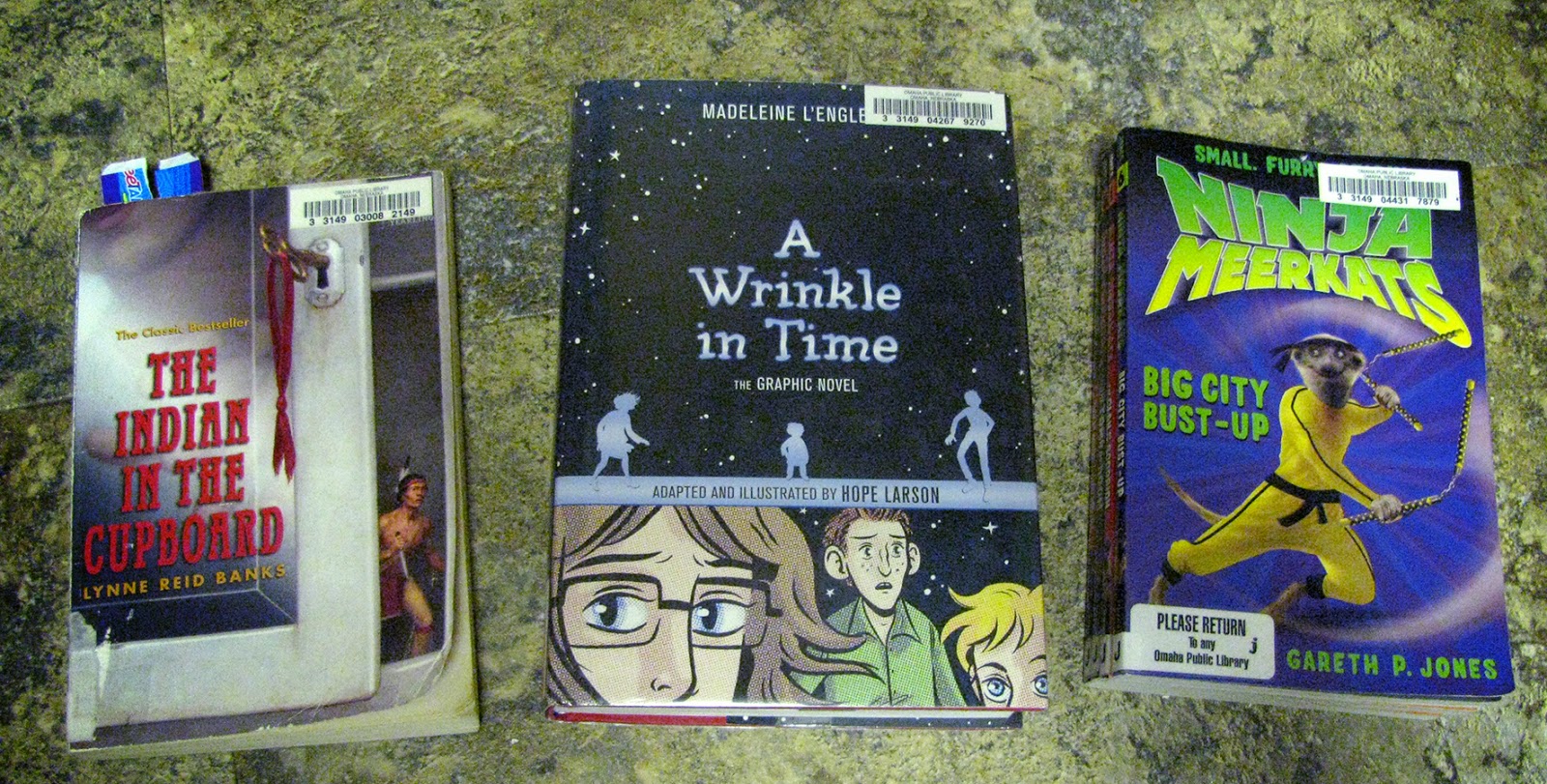 Dad said, "It will take him more than a month to get through A Wrinkle in Time!" It was very thick. Mica looked at that book, and had a look of determination in his eyes. I could tell he wanted to read that book! He was into A Wrinkle in Time when we saw it at The Rose Theater last month.

He had A Wrinkle in Time and 3 Ninja Meerkats books read by Friday night! Half of The Indian in the Cupboard was read to. He finished that one Saturday morning.

We returned all those books, and Mica put 2 of the sequels on hold for The Indian in the Cupboard and 2 more Ninja Meerkats, I added How to Eat Fried Worms, Tails of the Fourth Grade Nothing, and a few Ricky Ricotta's Mighty Robot books. Plus we added 2001, A Space Odyssey and Clue. I'll have to preview the movies to make sure they are ok for the boys to watch. They love playing Clue, so I thought maybe they'd enjoy the movie.

What about you folks...was reading your thing when you were younger? What were your favorite books around 3rd, 4th, or 5th grade? I want to keep Mica's mind active. Maybe he'll check out what you loved to read.

Isaak is a little slower in the reading department.

Not slow as in he can't do it; more like he doesn't want to do it. It's like pull teeth to get him to read. It's funny though...on his report card his effort in reading was "O" for outstanding.

Right now he likes reading Dr. Seuss books. Everything rhymes. He thinks they are funny. He's not very observant to words that he gets wrong over and over again. He just keeps getting that or those word(s) wrong instead of looking at it, and trying to get it/them right from that point on. He reads for Dad the best, but I remember to ask him more. Mica gets frustrated with Isaak when Isaak reads to him. Isaak doesn't want to try certain words, and wants Mica to tell him words that rhyme with the words he doesn't know. Mica's like, "Just sound the word out already!" I have Isaak read to Mica in the car sometimes.

I know Isaak's better at reading than he let's on. He'll hit big words, and sometimes just blurts them out like they are no big deal to say.
Posted by An Apel a Day at 9:50 AM

My little one struggles with reading a bit more than my older one, but they both love it.

I was that kid too. I always checked out way more books than I could carry, and read them back to back until I was done. I loved going to the library!

Beverly Cleary was a fave of mine, but besides Ralph and the Motorcycle, her books were geared more towards girls. :)

My Granddaughter always loved reading. She ended up graduating Sums cume laude. Or however you spell it. I think the reading helped

It's wonderful that he loves to read so much. When I was younger I was really into Enid Blyton ;)

Honestly, I never read kid books. I went straight into adult novels from Stephen King and V.C. Andrews. I am just now finding the joy in the YA books I completely skipped over back then too!

I think reading opens up imaginations. I think it's great that he likes to read so much. I used to read a lot but don't have a lot of time to anymore. My two boys are a lot like yours. My 16 yoa likes to read but my 15 yoa isn't much into it unless he has to.

I was a reading maniac, still am, lol.
Back then I loved anything Roald Dahl, (like James and the Giant Peach)the Phantom Tollbooth, and Madeleine L'Engle. She wrote a whole series of books, of which A Wrinkle In Time is only the first.

I have always loved to read... as long as I can remember ;)
Broxton loves for me to read to him.. but he has no desire to read to me.. :(

I really love reading and we have big collections of books..but Bo and Obi are still developing the reading habits, enjoying pictorial books and stories but not really wanna read themselves..hope they will soon love reading too :)..