We've told Mica that this is his last friend birthday party. Maybe he can have a friend over for an evening of fun. We're feeling done with full blown parties.

I have a pretty close net family with nephews my boy's ages, and we have a birthday party always with them.

Mica wanted to take his friends to see Ant-Man.

I could have cared less to see that movie. I'm feeling about as done with superhero movies as I am throwing birthday parties. I'm such a stick in the mud!

Dad was the lucky one that got to take 2 girls and 4 boys to the theater. He ended up spending way more on popcorn and drinks then he did on movie tickets. Mica said to all the kids, "Bring your own money if you want anything to eat, or drink." We had to scold him about that one. When just our family goes to the theater, we fill up ahead of time to avoid the cost of all the snacks. For a birthday party that's not what you say to guests. It was kind of funny though.

I took Isaak to the Lowes Clinic, and to run some errands. Then I got lunch prepared for all those kids.

1 kid has a sister that asks to come to everything, and 1 other kid has a whole family that shows up to everything. Thankfully that didn't happen this time. I'm not trying to sound rude. I know it appears that I am. It's just that I want my boys to develop friendships with who they choose to develop friendships with. I even took Isaak out of the equation, so Mica could be with just his friends.

Travis said it all went smooth, except for 1 thing. A girl decided on her own to go get more popcorn without telling Travis. YIKES! It took going in and out of the theater twice to find her. He was nervous. She was found. He told her to let him know if she was leaving to go to the bathroom, or whatever. He just needed to know! Then he could stand between the theater, and wherever she went.

Food was ready when they got back. I had to get a special pizza for a girl that was allergic to tomatoes. Get this? She didn't eat the special pizza either.

We had our rare soda that we never drink.

Last year I said, "No presents please." This year I said nothing. Noting that kids are all about presents. Even the givers are excited about giving. That's good. 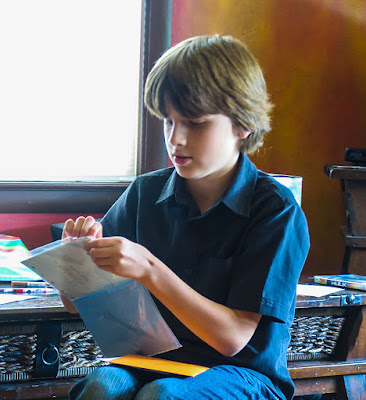 I did have an inside chuckle when Mica's friend gave him a card with nothing written on it. One of his other friends said, "Um you're supposed to write on the card!" He replied with, "Well my mom didn't leave me with enough time." I said, "Thank you. I'm sure Mica loves the card!"

The girls found Mica's dress up clothes amusing. One came out looking like Indiana Jones. The boys unfortunately found the boxing gloves and the Hulk Smash gloves. I don't care if my own boys fight with them. When you get other kids in on the scene that could get hurt - well that's when I worry. *Note to self - hide all boxing type gloves when any friends come over. HA

Mica got a few Target gift cards, and cash from his Great Aunt Becky the week before. Sunday was a day of shopping. Dad made sure they each had a wallet. Isaak never spent his birthday money from May! It took awhile, and some deep cleaning to find their wallets. We found them.
Posted by An Apel a Day at 3:28 PM

My oldest wants to see Ant Man, too, but I have zero interest so I am thinking we will just wait until it comes to Netflix.

Sounds like a great friend party for Mica! We are about done with friend parties too. It's just too much work. Allison will probably have one more, then that's it.

Hope he had a great birthday!!
What did they think about the movie? Broxton wants to see it

Target gift cards are a great gift idea. I wouldn't mind those myself.