I have to admit I've never watched The Vampire Diaries. I really don't watch anything vampire related. They are HUGE with young adults though. I've heard many of my students talk about vampire shows for the last 5 years. If you are into vampires, or know someone that is, this post is for you!

This is a a great giveaway for you CW fans!

There are 4 blogger exclusive interviews with the creator of The Vampire Diaries and The Originals, Julie Plec.

These super fan videos feature Julie confessing her favorite moments & top 5 episodes from the recent seasons of both The Vampire Diaries The Complete Sixth Season and The Originals The Complete Second Season.

This is a “Viewing Party Eats: Recipes to Satisfy Friends & Enemies” Downloadable PDF.

It's sure to impress your guests. With index card recipes and party-ready place cards included, we’ve made it easy to prep some snacks to satisfy during your marathon watch-party.

About The Vampire Diaries The Complete Sixth Season

The Vampire Diaries continues its sixth season with more delicious drama to sink your teeth into. In season five, after a passionate summer with Damon, Elena headed to Whitmore College with Caroline, not knowing Bonnie sacrificed her life for Jeremy’s. Meanwhile, Stefan and Caroline’s friendship deepened as they stood up to the Travelers, a nomadic witch tribe driven to strip Mystic Falls of magic and cast out its supernatural residents. In the shocking season finale, Damon, fearing he would lose his loved ones on the crumbling Other Side, made a huge sacrifice to bring them all back — with catastrophic and heartbreaking results. Season six follows the characters’ journey back to each other as they explore the duality of good versus evil inside themselves. Matt Davis reprises his role as Alaric Saltzman, recently returned from The Other Side. Plus, the season will make you misty-eyed as the departure of a major character will turn lives upside down and leave us asking what happened to Mystic Falls.
Contains All 22 Episodes From The Sixth Season Plus Two Featurettes, An Audio Commentary, The 2014 Comic-Con Panel, Deleted Scenes, And A Gag Reel
The Vampire Diaries on Facebook: https://www.facebook.com/thevampirediaries The Vampire Diaries on Twitter: https://twitter.com/cwtvd

About The Originals The Complete Second Season
As Original vampire-werewolf hybrid Klaus Mikaelson returned to the vibrant, supernaturally charged city of New Orleans in season one, he was stunned to learn — along with his siblings Elijah and Rebekah — that Hayley, a werewolf, was pregnant with his child, and his vampire protégé, Marcel, whom the Original siblings had thought long dead, was ruling the French Quarter. Soon, a bloody war escalated between vampires and witches — the stakes raised by powerful teenage witch Davina and by Klaus’s bond with Cami, a student with a painful past — and a ruthless pack of wolves seized the opportunity to stage a violent coup. Now, in season two, a new status quo must be adjusted to, as the newly empowered werewolves control the city. Klaus struggles with weaknesses as Elijah desperately tries to save Hayley — now a hybrid — from a vicious spiral of self-destruction. Meanwhile, with the re-emergence of several Mikaelsons, “family is power” takes on new meaning.
Own The Originals The Complete Second Season on Blu-ray, DVD & Digital HD September 1, 2015
This contains All 22 Episodes From The Second Season Plus Never-Before-Seen Featurettes and much more!


This blog app has some fun features!
• Take the "Are you Fit for Vampire Life?" Quiz to find out if you have what it takes to be a creature of the night.
• On September 1st come back to take a new "Could You Be a Supernatural Being?" Quiz - the app will be automatically updated with a new quiz experience, so be sure to take both!
• Scroll through all the images from the shows and come back every week for new unlocked content.

Each US or Canadian household is only eligible to win (1) The Vampire Diaries Season 6 or The Originals Season 2 chosen at random via blog reviews and giveaways. Only one entrant per mailing address per giveaway. If you have won the same prize on another blog, you will not be eligible to win it again. Winner is subject to eligibility verification. 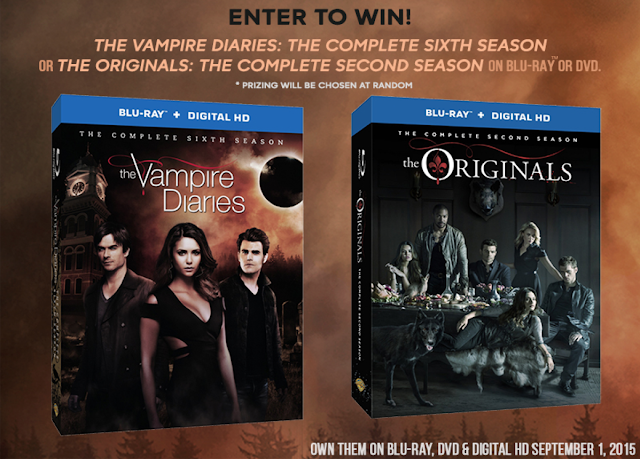 I did not receive one or more of the products mentioned above. I only recommend products or services I use personally and believe will be good for my readers.
Posted by An Apel a Day at 8:53 AM

I haven't watched this show either. I think I saw this same review and giveaway on another blog. Have a great week.

I haven't watched this show either. I think I saw this same review and giveaway on another blog. Have a great week.


It seems you already take on many traits of the supernatural… embrace your true self, stay vigilant and stay out of the sun!

I haven't seen either of these, but they are both on my list if I ever catch up on shows from my dvr. Thanks for adding my giveaway to your list. I put yours on my form too :)

It said I am 57% fit for vampire life. With half my body in the shade and half in the sun – I possess some traits that would help in my supernatural transition.

Not my cup of tea, either. I already have enough of a problem with bad dreams without adding vampires to the mix! ;-)

I didn;t think I would ever like a show like the Vampire Diaries, but I LOVE IT! The Originals is not as good, though.

I LOVE both of these shows! I am patiently waiting for them to come to Netflix. The CW has the best shows!! I am only 57% fit for vampire life!

i got vampire as my supernatural creature

I don't watch either of these... but they are great for a fan :)

I took the quiz and it said "You scored Werewolf!"

I am Vampire, which I am totally okay with!

When I was younger, I used to watch vampire shows. Now, not sure why I don't.

I took the quiz, and it says I am a Werewolf.

I took the quiz and it said "You scored Werewolf! I'm good with that since I love dogs.

The quiz said I am 71% fit for vampire life. I am not sure if that is good or not.
Laurie Emerson
lauraemerson17 at yahoo dot com

My result from the quiz was vampire! Nice!