African Grasslands in the Works

If you ever come to Omaha, Nebraska, this is by far the hot spot.

Henry Doorly Zoo has been rated number 1 in the world in 2015.

I'm going to share a little section of the zoo each week. Keep in mind that this is just a little piece of the gigantic zoo.

The zoo has one HUGE spot that is getting an overhaul. Their African Grassland is a $73 million endeavor 28 acres in size, the largest project in Omaha's Henry Doorly Zoo and Aquarium's history.

Phase I: Opening in its entirety summer 2016.

Currently being constructed, this phase will include major exhibits for elephants, giraffes, white rhinos, cheetahs and impala, as well as mixed-species habitats, animal wading pools and interactive demonstration areas. A children's African pygmy goat petting area will also be open to visitors.

The African Lodge marks the center of the exhibit. It features the Tusker Grill concession area, a newly themed train station nearby and serves as a rental space for private functions and overnight experiences. Phase I also includes the Giraffe Herd Rooms, now open, and the Elephant Family Quarters, which is currently under construction.

This phase will focus on an elevated site  showcasing Africa's top predators and their prey near the Skyfari terminal overlooking the existing Lagoon Valley.

African wild dogs and sable antelope will roam near a pride of lions that will be seen perched atop tall, rocky outcroppings. Skyfari riders will need to look up to see these majestic animals as they arrive for landing at the station.

A safari tent camp will also be nearby to provide groups and families the opportunity to stay overnight. Exhibit construction is visible from the public pathway.

One hot spot is the giraffes. We got some new ones. They have a temporary home right now. In the summer of 2016 they'll have land to roam. If you are coming towards Nebraska for a visit, I may wait until the summer of 2016. There will be so much more to see.

The okapi has a similar body shape to that of giraffe, however, with a very much shorter neck relative to its body size. It shares other distinctive features with the giraffe including unusual fur covered horns, specialized teeth and tongue, and a ruminating four chambered stomach. Interestingly, only the male okapi has horns. With its stripped butt, one would think it's related to the zebra. It's head, tongue, and face structure is more like a giraffe. 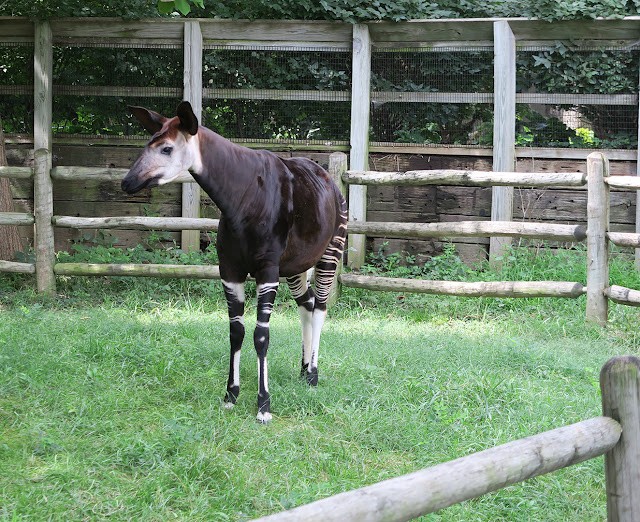 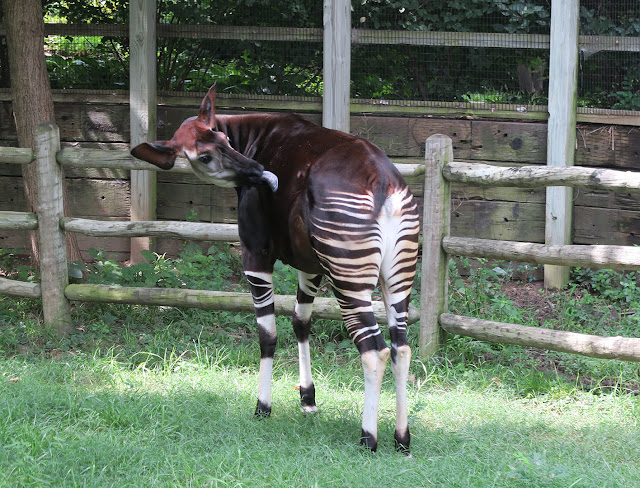 The giraffes were in their new make shift home. They were just put in their, so we were asked to be quiet. Even though I didn't like their background so much, I loved watching them! They don't need a lot of space, but will get some very soon! 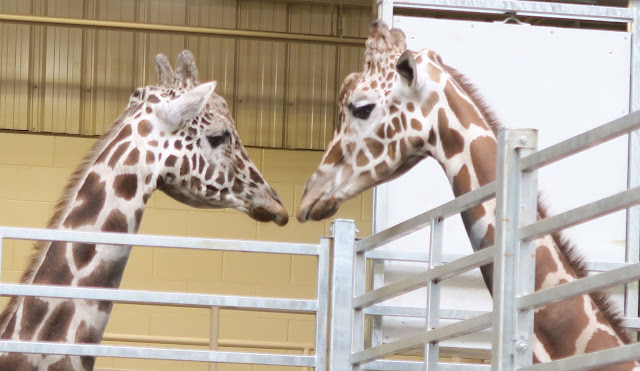 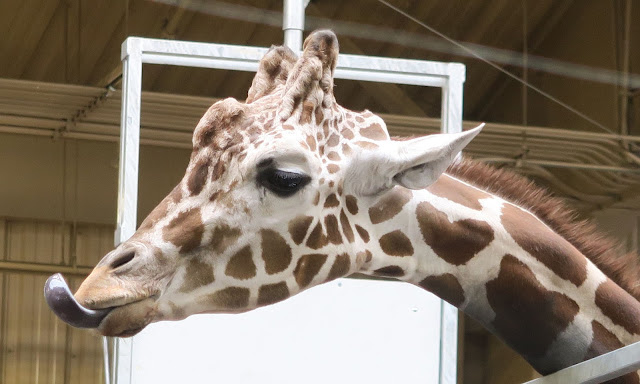 They like to lick other giraffe's horns after eating. 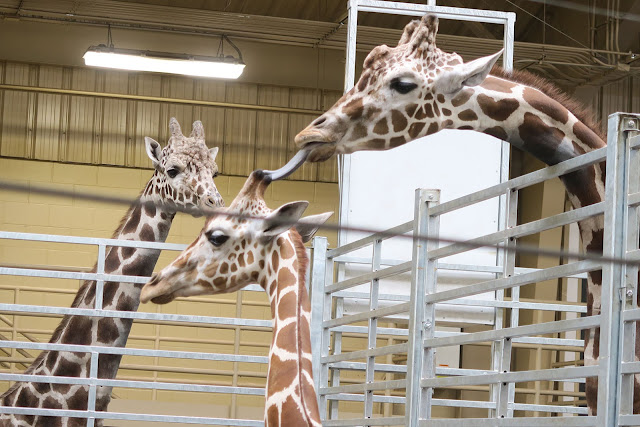 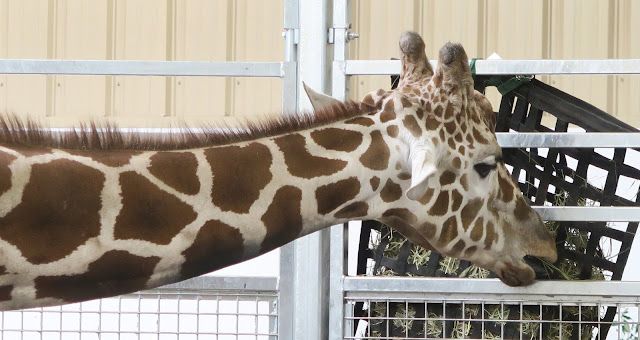 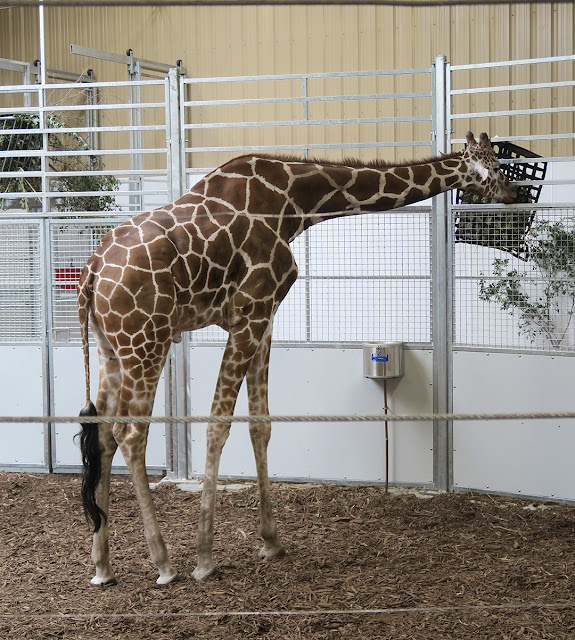 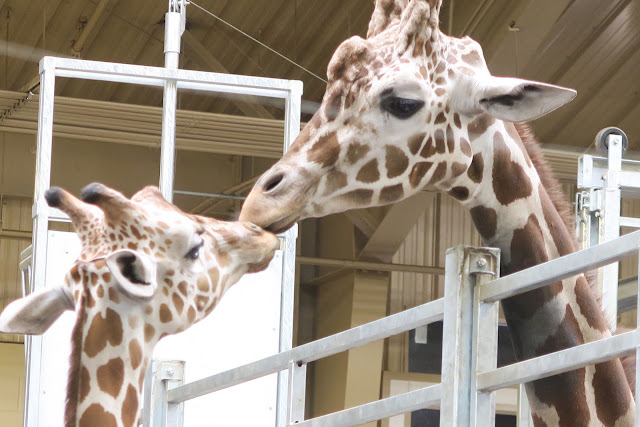 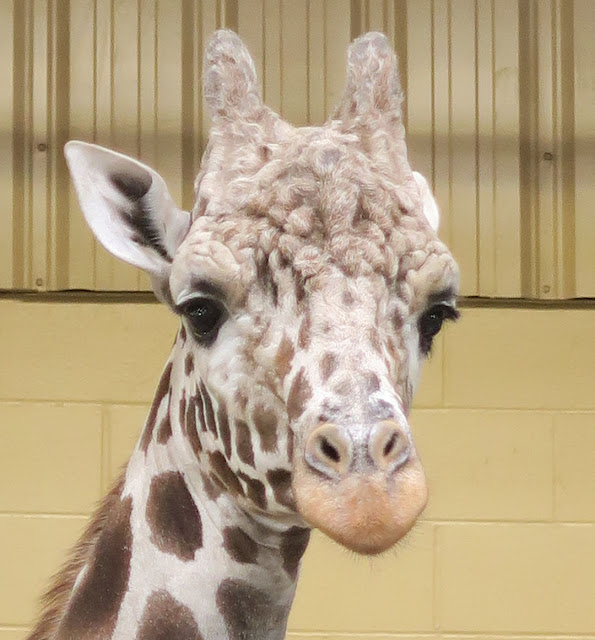 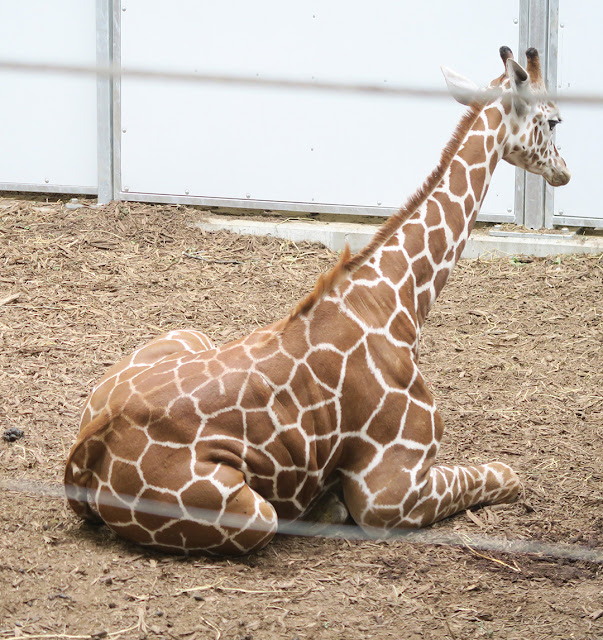 I guess people can be around giraffes. I understand why they keep people away at zoos though.
Posted by An Apel a Day at 2:05 PM

I like zoo's.But the nearest one is in Atlanta. It's in a really bad part of town. There are more animals living around the zoo than inside it.

Aww I love that frontal shot you caught of the giraffe. Such sweet eyes!! I don't think I've seen an okapi before. Pretty sure we don't have them in our zoo here. Thanks for introducing them.. I'll go read up more on them. They sound and look interesting! Really like a mix of zebras and giraffes haha

Giraffes are my favorite animal. It sounds like you have a pretty nice zoo!

That sounds like a really cool zoo. You got some amazing photos too.

Wow, this is fascinating!
I had no idea the giraffe had a close relative! How beautiful!

Thank you for sharing.

My second oldest just took my youngest to the Miami Zoo. They let them feed the giraffe there, but they didn't want to wait in the really long line to do so.

That Okapi is pretty amazing looking! And the changes sound great!

Awwww! I love giraffes! They are so magnificent!

I wish our zoo was closer and not in a bad area, I would totally go more. Love the giraffe photos

My Granddaughter loves giraffes. The last zoo I was at was the Bronx zoo, last year.