The Attack of the Great Pumpkin

Never in my life did I expect to get attacked by a pumpkin!

It happened one fall night. I decided to make a mixture of veggies cooked on the stove with olive oil: shredded zucchini, chopped up onion, garlic, pumpkin, and baby tomatoes. Towards the end I sprinkled some nutritional yeast and parmesan cheese. All pretty healthy.

I decided to cook the rest of the pumpkin in the stove. I took the time to peel it, cut it up, bag it, and put it in the freezer. It took time for sure.

I'm not the type to waist anything. I took the pumpkin seeds out, soaked them in salt water. Pumpkin seeds have more protein in them than nuts do.

I had my sleeves pulled up, and was really covered in pumpkin.

All the sudden the pumpkin grew teeth, and pulled me in. 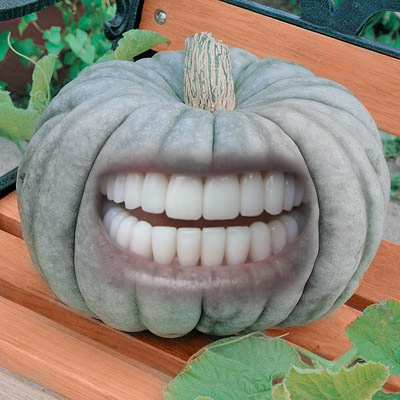 It started biting at my arm. 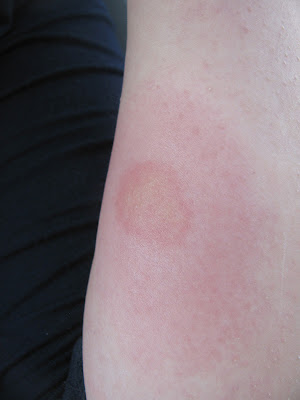 The bite started as just a single hive about the size of a quarter. It itched. The next day there was redness around it that seemed to expand an inch out every 4 hours. Blisters formed on the original hive.

It kept getting redder and redder. Not even Benadryl stopped the itch. 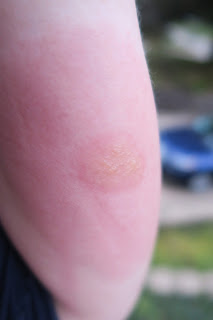 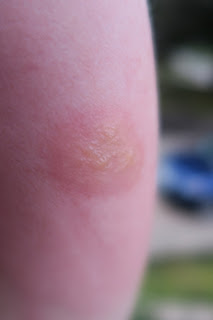 It was then I decided I needed to go to the Urgent Care.

Me: "Boys I know you just took a shower, but it's time to get dressed. I have to go to Urgent Care." They come out in pjs. Me: "Good enough. At least your are not in your underwear."

When we got there it was then that I realized Isaak had on 2 different shoes. He said he did that on purpose.

There they told me I had an allergic reaction. I told the doctor about the attack of the great pumpkin. Only this time I told her the truth. I just itched my skin with pumpkin fingers. Apparently my skin didn't like that. Pumpkins, squash and zucchini are all related to ragweed.

Online it says the best substitute is sweet potato. My husband is not happy about that one. He doesn't care for sweet potatoes.

Internally none of those veggies will cause that kind of damage. It will just make those that are allergic stuffier.

I'm supposed to put calamine lotion on it at night. I will need to get more of that. I found out ours expired when Mica was 2, he's 10 now. I never knew that stuff had an expiration date. That will help dry up the infected area. The blisters are bad...if they pop and go on other parts of my skin those areas will get infected to. Unfortunately I woke up with bigger blisters on my skin about the size of corn kernels. It's in the spot where I rest my arms to type, and feels really weird to type.

I had to pick up 3 meds: A topical steriod, a oral steriod, and a non itch med that has a side effect much like a tranquilizer. I'll be big and buff over Halloween.

While waiting in the drive through for my meds, the boys started wrestling in the backseat. Who could blame them? I was growing impatient to. The pharmacy had me wait 5 to 7 minutes, which ended up being 15 or more. The pharmacist was on the phone with me when Isaak blurted out, "Is that a boy or a girl?" Shaking my head at them I think he got the point.

Now I'm drugged up. I'm not completely out of it yet. If you are allergic to ragweed have someone else cut up pumpkin, squash, or zucchini for you. Whatever you do...do not touch one of those veggies and scratch your skin!

Here's something I've never understood: Why are allergy shots good? They build up your resistance to allergens right? I get that. Then when it comes to eating foods you're allergic to it's bad. You'd think in small doses, eating things you are allergic to would be just like a shot...building up your resistance. They said no to peanut butter for the boys from newborns to age 5 because of all the peanut allergies. Yes I cheated. Now studies have shown to give kids peanut butter to help build up a resistance to peanut butter. Have a furry animal when you're small to build up a resistance to them. I don't get why someone that has an allergy to one particular thing should stay away from that thing, and all things related to that thing with consumption. Maybe doctors do not get it either.
Posted by An Apel a Day at 9:41 AM

Wow, it got you good. I know when I am cleaning out the seeds, it sometimes makes my hands itch.

oooh my..that looks serious. Good thing you go to the urgent care directly. I have two pumpkins at home and my kids are having fun decorating it...

I have never heard of anyone being allergic to pumpkins before.

Wow that pumpkin did a number on you! You should be in my family with all your allergies! We always have strange problems like this with hives or reactions. It is not fun. Hope you feel better. The pumpkin picture with teeth did make me laugh though!
twinkle at optonline dot net

Oh dear!! Maybe wear gloves the next time if you want to prep those vegetables. I know some people do that when preparing tapioca because they can cause itching too

It looks so irritating! I hate cleaning out the pumpkins because it makes my skin itchy. Not like what you got though. That would be horrible!

That must have been irritating!

Perhaps that's why doctors are referred to as 'practicing' physicians?

Glad you were seen and that it wasn't something like Lyme - so I worry a bit.

That looks painful to me. Glad you are on the track to getting better.
I hate that your allergy is that bad. Lucky for me, I am not allergic to anything that I know of (besides artificial cinnamon. Like the kind in candy...like redhots and fire balls)