Every once in awhile I have a crazy student story. This week I had multiple things that were crazy that happened in one day. I'm going to tell you about the one that topped the list.


Me: "Students please go to ticketprinting.com to get specs for printing your theatrical ticket. You'll have to figure stuff like this out on your own when you're on the job, so you might as well start now." (these are 3rd year students.)

Student: "It says on their example to put a title/event name here. What do they mean by 'event'?"

Me: "An event would be like the Home Show at The Century Link Center, or Monster Jam at the Mid America Center. It includes different things, that's why it's an event. A theatrical play or musical would have a title. Such as The Sound of Music, or Grease."

Student: "I'm sorry could you tell me like I'm not smart at all."

Me: I was thinking I just did. I tried again showing him pictures from my computer of different events. Finally I ended with, "Just type in your play's name there."

When we were playing Monopoly Isaak landed on a Community Chess. He inherited $100. He said, "What's inherited mean?"

Keep in mind Isaak's 7, the man boy mentioned in number 1 is in his early 20s. I said, "You get it from a family member or friend that died." He said, "Like if Mica dies then." Ok then. 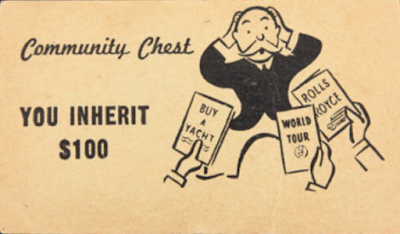 We met up with our KC friends at a gallery this weekend. Then we went out to dinner. This friend we haven't seen for over 10 years. She's gotten a divorce. Then she was with a girl partner. When she messaged us she mentioned that Jerry or Jerri would be with her. We didn't know what to expect - guy or girl. Should we prepare our children, or not? We said a little something as if it was no big deal. It was a guy.
We ended up staying out with them until 10. Isaak gets hyper when he's tired. Jerry was helping him make paper air planes. The restaurant was completely empty on that side - except for us, it was taking the wait staff FOREVER to do things, so I was ok with him being crazy this time. The photo showed his crazy state well. Sorry for the bad lighting. 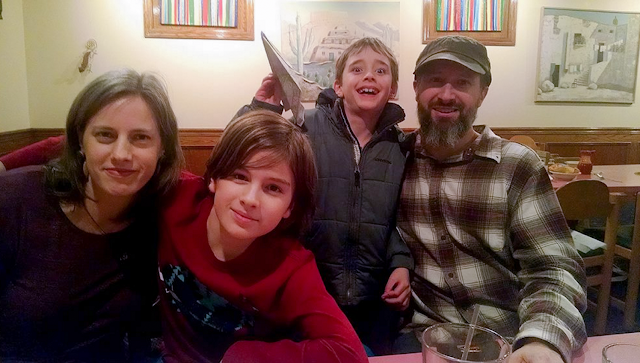 My Father-in-law had a bunch of his ear removed (cancer).


My Mother-in-law texted Travis about it. It must be a lot because the doctor asked him if he want skin grafting done. He declined. They stay in the middle of no where, so they don't care too much about what people think of them. Travis texted his Mom back and said, "Mike Tyson could have done it cheaper!" We were cracking up! His Mom said they were joking about it to.

Mica pulled out a tooth this week and said, "Baby delivered."

The Tooth Fairy was late. When she he finally got to our house, she had a folded up dollar. He has another loose tooth. My sister can hardly believe it. Her son is 10 and his baby teeth have been gone for awhile now. My nephew cut teeth earlier than Mica, so there's that.
Posted by An Apel a Day at 7:06 AM

Broxton has a loose tooth now. (one of the brothers made it loose when they were wrestling over Christmas, but its still hanging in there for now!)
Hate to hear about your student... doesn't sound like the brightest of the bunch.
Hope your father in law gets well soon. I hate ear issues.
Have a great Sunday. Hope the weather is better now.

love the photo from dinner. And Bo just had a loose tooth and couldn't wait to get the tooth fairy come and slip some notes for him :)

My 8 year old has only lost 5 teeth, but he cut them at 5 months. All the other 3rd graders in his class have lost 8.

Sometimes when I watch the news, I am just in shock at how stupid some of our youth seem. I was watching something where they were interviewing college students and the stuff that was flying out of their mouths was total face palm moments.