How Something Special Can Lead to Disaster Quickly

At the boy's school people from Village Inn came to visit his classroom. They handed out coupons for pie, and meals in Mica's classroom. I decided that we'd go out to eat on St. Patrick's Day because they were having special activities that night.

We sat down. I told Mica, "Why don't you go ahead and look at the adult menu, and I'll use the free kid's meal coupon for Isaak." Mica said, "Mom...really!!! Those are my coupons!!! Not Isaak's." I said, "Honey I know, but we'll still get a free meal either way. This way you can get more to eat. The kid meals don't seem to fill you up like they used to." He said, "Mom Isaak's not using my coupon!" It was hard getting into this 4th grade mind that a coupon will be used, and it didn't matter who used it because I was paying for it all anyhow. Mica said, "Fine...Whatever." I said, "If you don't loose the attitude we'll just leave right now. It's your choice."

Mica didn't want to be there because it was a kid night. He thinks he's past being a kid. Ha! Even my college students are kids to me.

A lady came over to give the boys St. Paddy merch. Mica said as soon as he entered the door, "I don't want that stuff!" But he took everything she gave him, and wore it. 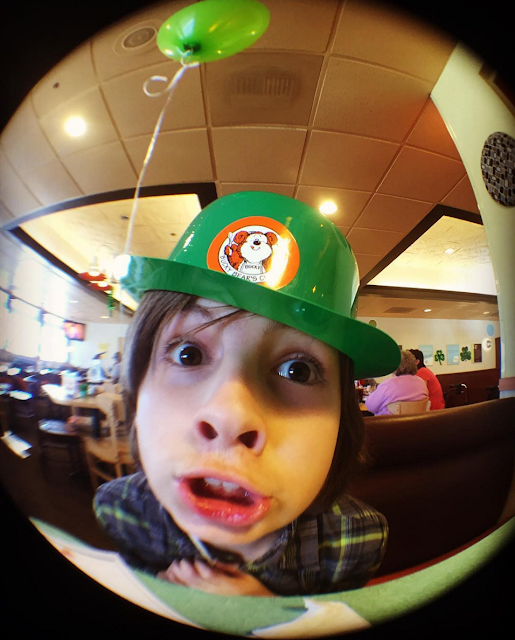 Surfing the adult menu Mica spotted a $10 California Burger. I said, "Nope! How about the Classic All American Burger for $7? You won't be able to eat a $10 burger." Mica said, "Yes I will. I can eat anything." I reminded him about his behavior. He went for the $7 burger, and couldn't finish everything on his plate.

Isaak was begging for the Funny Face Pancakes, so that's what he got. It didn't come with a special drink. I said, "You can have water this time." He was pouting. Mica teased Isaak for getting a 2 year old meal. I said, "Hey when I make faces on your pancakes at home I do it to mine to. I'm not 2 years old." Mica said, "That's because you want to be a kid." I said, "There's nothing wrong with eating something fun Mica."

Isaak cheered up when he got a balloon. I was so glad because I didn't need more drama. 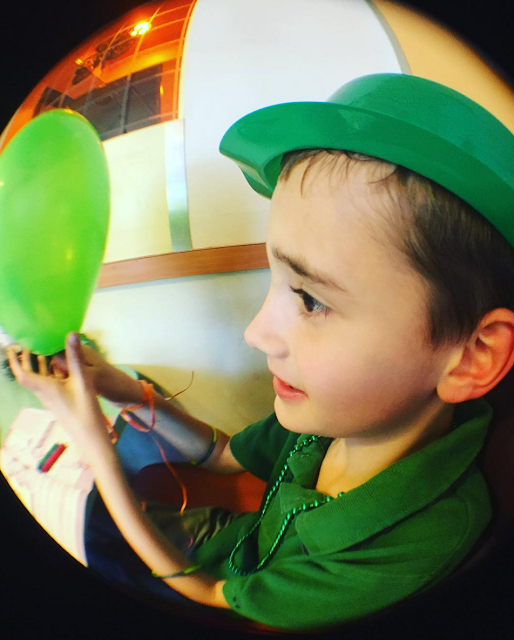 Mica said, "Hey that character was at our school." I said, "Really? Maybe you guys can stand with him for a picture. Mica was hesitant. He didn't want to be a part of all that kid stuff. Isaak loved the walking character, but accidentally let go of his balloon, which he just didn't know what to do about that.

The whole meal Mica looked around for the walking bear. 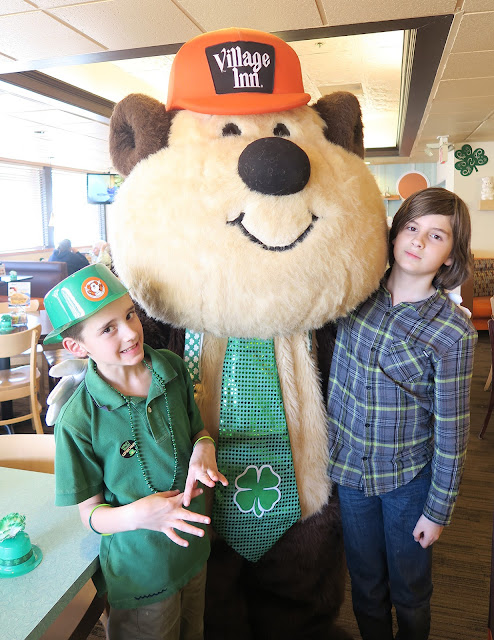 Mica said, "Hey what about my pie coupon?" I said, "We can only use 1 coupon, and you didn't finish your meal. I'm not getting you dessert." He was annoyed with me.

In the car I reminded the boys that going out to eat is a treat, and that some kids go hungry.

I think we're all feeling a little off with Travis being in Nebraska City. We're used to him being around. He'll be away from Wed. through Sun. for 4 weeks working on an Artist Residency.
Posted by An Apel a Day at 2:28 PM

Hard age for him.
Broxton has no clue about money. He thinks we have to do all the school events. I told him next year he has to save his money and use it for events. We will only pay for field trips then.

Allison's going through that phase too. One minute she wants to be all grown up. Yesterday she's asking why the Leprechaun didn't come this year. Definitely stuck in the middle!

Yikes oh I can imagine Mica's frustration! I still get it too as an adult.. torn between being a responsible parent / adult and wanting to still be carefree like a kid :P

Hope the rest of the weekend goes better for you and the kids!

I think I would wait a while before going out to eat again ;-)