This isn't a movie review. A few weekends ago the boys spent the night at my oldest sister's house. She got them pizza and a few movies to watch. One of the movies was Inside Out. Have you seen it? I haven't, but I've wanted to.


I feel like it's a movie that should have gotten more hype than it has.

Forbes said this about the film:

"This latest Pixar film shares many qualities with the third Toy Story chapter, including a beautiful, rich, unexpectedly complex emotional arc that reveals itself slowly and will leave adults with jaws dropped and eyes damp. The film has possibly broader appeal than almost any previous Pixar film, with plenty for the youngest kids to enjoy but a story aimed at a slightly older near-teen and early-teen demographic, as well as more than the usual amount of smart storytelling and humor to appeal to the adults in the room. Indeed, this isn’t a story simply for the children to enjoy in their own way and adults to enjoy separately — it is a film meant to be shared by parents with their children, to bridge a gap between adolescents and adults, more than any animated film I’ve ever seen."

Mica didn't want to see it. He said, "It's for babies." He has in his mind that cartoons are for younger kids. He's pretty selective in what he wants to watch. He's cool with Kung Fu Panda and any anime flick. If I put on most cartoons he doesn't want to watch them.

We convinced Mica that it would be great for him to watch Inside Out. Isaak has been wanting to see it.

They watched it, and guess who loved the movie? Mica did.

Isaak woke up really depressed this morning. He had a dream that the characters from Inside Out were in his brain. They were super nice. They played with him. When he woke up he wished that they were real. It really bothered him.

Isaak has always been our more dramatic child. I never know if he's acting, or serious. He'll cry for 10 minutes. I'll leave him be if it's something crazy that he's crying about. After awhile I'll check on him, and he doesn't even have any tears running down his face. I'm not saying that he wasn't bothered, but he milked a reaction out of us. 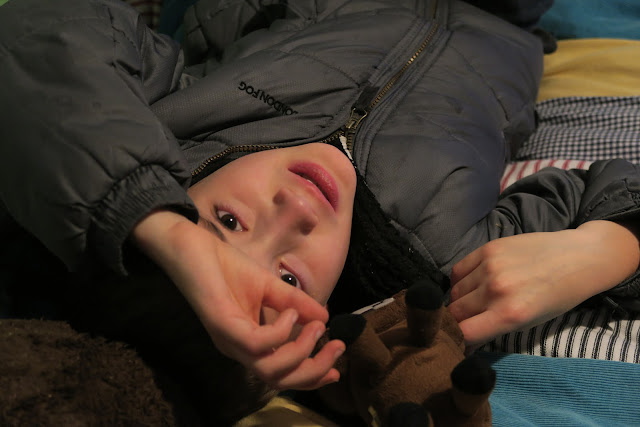 It's hard as a parent of a dramatic child to know if the child truly needs more attention, or if they are playing you.

Part of me thinks:

Kids certainly need to learn to suck it up. Life is too short to let things bother you all the time. I do spend time with my kids, so I shouldn't feel guilty that they get moody at times. Kind of the tough love approach.

Another part of me thinks:

Kids feeling shouldn't be ignored. Isaak has been upset because Mica's in The Student Council, Chess Club, and more. Isaak's too young for a lot of those special things. Mica's an independent player, and always has been. Yes Mica plays with Isaak, but it's minimal. Isaak's face lights up when I play bouncy ball in the hallway. His face is crushed when Travis helps Mica plant seeds that were given to him. Spending time with a kid who is moody will only be positive, and bring us closer together.

Email ThisBlogThis!Share to TwitterShare to FacebookShare to Pinterest
Labels: drama, Emotions, Inside Out, moody, Sensitive

Broxton's been really good lately. He has his moments, but he's the best big brother to Savannah.

We loved this movie! I think all kids can get moody at times. I kinda feel like the jerk mom though because I am one who tells them to suck it up.

We saw this in the theater and LOVED this movie. And yes, I think you already know my little one is VERY moody.

We saw that movie, it was cute. I get the drama thing, my daughter has her moments.