Last week I played the single Mom role, while Travis was in Arizona visiting his parents. It was a hectic week for sure. It just so happened to be my last week of classes. Finals time is usually pretty stressful at work anyhow.

We had a few mishaps:

There was an ice storm on Friday. Many students were freaking out about the oncoming storm, and wanted to take my exam early to get out of town. I knew if I opened that door everyone would want to do that. I 1/2 lied and said, "I can't. It's because of accreditation hours." If I let some take a test early, and not others it tends to show favoritism and they could discuss the answers on the test. The storm didn't happen until it was close to the time I was off work, which was way after the students left. Lucky me...I got to battle it after grading all day. Ha!

It continued to snow on top of ice throughout the night. This lady right here (fingers pointing at myself) cleared the snow off my Subaru, and dropped my Civic car keys. I looked so many places and could not find them. It's not like me to loose things. I could have gotten so much done had I not had to look for keys. Isaak helped me look. He was such a concerned little individual. Mica found them in the snow outside. Hey they still work!

The ceiling where the fireplace is at started dripping. Apparently there's too much moisture condensation up there. :( Travis will need to put in bigger vents up in the attic in the spring. For now we're taking shorter showers. It sucks because taking a warm shower that's not long, but not fast was my most relaxing time. Oh wells!

I'm behind in wrapping gifts. At least I have all my shopping done. Here's the thing...one year Travis got mad that he didn't know what I bought. I told him he could go travel to see his parents, but needed to look at what I bought first. Then I could start wrapping them, while he was gone. We were both too busy. He left without looking at anything. I buy the gifts, I wrap most of them, but he has to see them. Goof!


Isaak, "Mom can you make pancakes on a weekday, since Dad is gone?"

I didn't make them on a weekday, but did on Saturday. For the record Isaak loves foodie art. Mica says, "I'm too old for this." 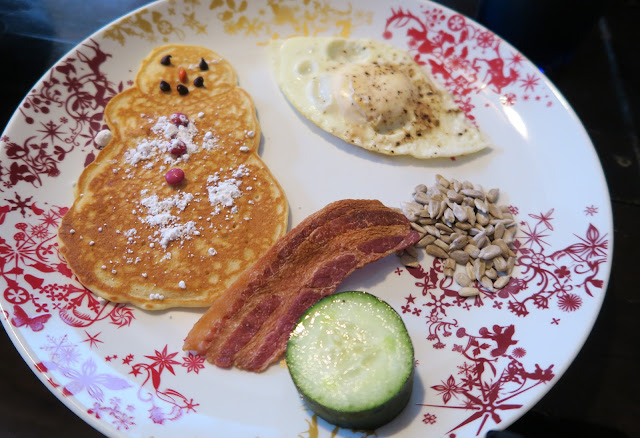 We handed out a lot of cards during the week. This is our card this year. Isaak's into basketball and Mica's into playing the trumpet, so this is what I came up with. 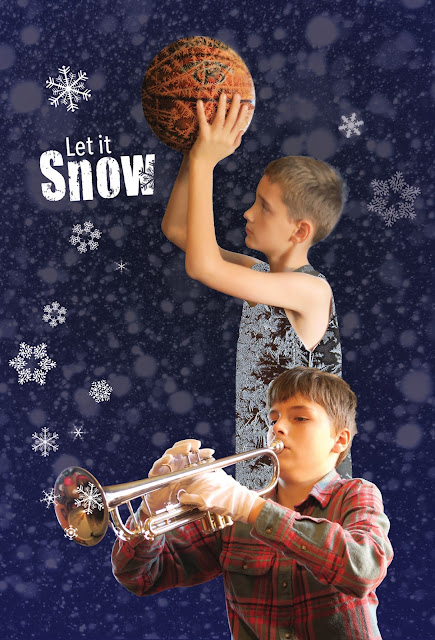 We went to Pier One to pick out a mug for Travis. Mica was drying dishes, and dropped his favorite mug. At the store the boys gravitated to these hats: 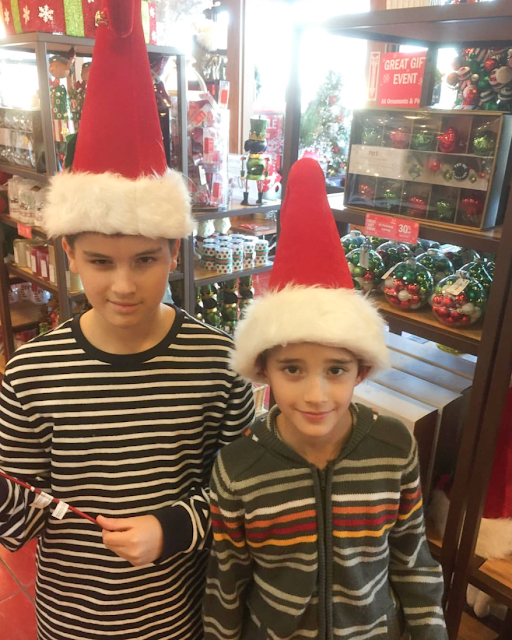 That pancake looks good in fact it al does I want some LOL love their photo with the hats on heheh!

Well those are cool hats-Merry Christmas!!!

Those are great hats! Did they get them? Also - sorry you had a rough week :( I hope a wonderful Christmas makes up for it!

You are a super mom! And no one's too old for snowflake pancakes! Have a merry Christmas. ^.^

Ah, I would have just cancelled the test and said, "Merry Christmas. Go home."

Ugh! What a week! Hopefully you'll get to relax now over Christmas break. I received the card in the mail this wee from you. Thank you! (Did I tell you that already? My brain is mush this week) They turned out so good. But then again, they always do. You are so good with the Photoshop!

Love the card you came up with. I need to get back into the habit of making these cards, especially at Christmas time.

What a wonderful and beautiful card.

Snowflake pancakes are great at any age.

Merry Christmas and I hope you have a great one.

It's a busy time of year but soon it will be over and you'll have time to relax (if you haven't already). Wait till the kids get older and maybe they'll make you pancakes on a weekday :)

My in-laws are also in Arizona and my husband does to visit them.
Your cards are so cute.

Now I want breakfast for dinner!!!
Love the card :)
Thank yoU!!!
Hope yall stay safe in the weather.

I'm not too old for food art. :) Love it! There's the card, I love that too! Hope you found a great mug for Travis. Glad your keys got found!

Your Christmas card is awesome!!

When I was in college, we took our exams over a four or five day period whenever we wanted. I don't remember exactly how it worked, but I believe they had a whole building of rooms for people taking their exams, each room with a teacher/proctor. You checked in at the front of the building with a blue book in hand, told them which test you would be taking (who your teacher was) and they gave you the materials, which you were required to return upon leaving the building. If they discovered you had shared information about the test with fellow students, you would get in trouble. I loved that, because I always took all of my tests asap so I could begin my winter break. It'd suck to be a teacher proctoring a test on the last day at the latest possible time especially with a winter storm coming. 😳 Especially as someone living in the south who isn't used to winter storms (like me!).