I got something really odd sent to me in the mail. It was in a hard Priority Mail envelope. My address was printed on what looked like an official mail slip, and taped on.

No letter was inside the envelope. Just a check. A check for $2,470.00 to be exact. I made it very white, so no one could do anything with this. 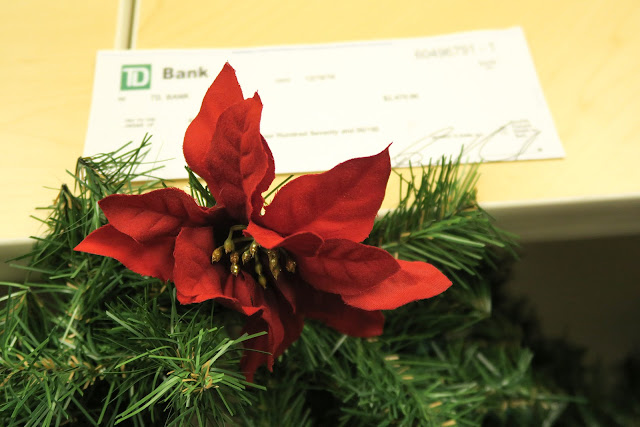 Upon first inspection I'm like, "Wow where did this come from?"

I snapped a photo and sent it to my sisters and mom. My mom was like, "Did you invest in anything?" One of my sisters looked up the company - TD Bank with the state on the address and found no TD Bank in Vail, AZ. Plus she pointed out that the signature is going off the page. My other sister was like, "That's odd".

I noticed that the check wasn't quite centered when it was printed off. The last thing that popped out at me was that there is no routing or checking number at the bottom. I noticed that when I went to deposit my own real work check.

So what would you do?

I'm the type of person that wants justice. I don't like being taken advantage of. I really don't like the idea of a young person, or old person getting a check like this, and trying to deposit it only to find out they land themselves in a mess of financial hardship.
This isn't the first time something like this has happened to me this year. Well it's the first fraud thing that's happened.

Lately I feel like I do a lot of running around to do the right thing when not very many people would. I wouldn't want my credit card, or license laying around for someone to swipe my identity.
Posted by An Apel a Day at 3:46 PM

You are such a nice person! I find most people aren't appreciative of that kind of help lately. Jason Ubers sometimes when he's bored. One of the college kids left her keys in his car. He dropped them off in a post office box for them to deal with. If I found a credit card, I'd just cut it up. We always had to do that in retail when someone didn't come back for their cards. If I had a license, I'd just pop it in the mail. I'm to the point I won't go out of my way for these things anymore. It's just too much of a hassle. If I find money in a wallet though, I would take it in to the police station. Other than that, I'll do the minimum.

The LOST AND FOUND?!?!?!? Ai yai yai!! I woudn't have done that either, nor would I want someone to do that to my credit card if it was lost, geez!! I found a wallet full of money on top of a phone booth once years and years ago. I drove to the address on the driver's license and the person in the picture answered the door. Not sure I'd do that today... I'd probably turn it in to the police station.

In any case, I'm here to wish you a wonderful next few days!! We have had your card up on the card holder all Christmas long. It came out just lovely and I love that you sent it. Merry Christmas!

I hate when you have to answer a million questions like you are in the wrong.
Merry Christmas

You are doing the right thing, Alissa..and you're right, not many people are doing that anymore. They sometimes just simply don't care..

My identity was stolen last month. I found out when a couple of new credit cards came in the mail. I am still picking up the pieces from this. You have to notify all sorts of agencies when this happens including social security (because they had my number) and a special unit of the FBI. :-(

You're truly awesome to go all the way out for strangers and your goodness will surely be rewarded :)

I actually heard a really cool story the other day about a guy who found another guy's wallet at a park. The guy that found the wallet (Guy 1) was afraid the wallet belonged to a Mexican (Guy 2), so, even though he called the police, he wasn't too keen on dropping it off. (ICE much?) Anyway, so he left a business card with a note in the park where he found the wallet telling the wallet owner to contact him if he returned to the park to retrieve the lost wallet. After an hour or so, Guy 1 decided to post on twitter that he had found a wallet and where; he said if Guy 2 was out there, to contact him and they would arrange to meet up. Guess what? Guy 2 found the business card and then contacted him via twitter. They arranged to meet in the park where the wallet was found and he was able to return the wallet to Guy 2, who was indeed a Mexican here on travel for a few days. Phew! :)

Anyway, good for you for letting so many people (companies) know about the fraudulent check. I could totally see someone trying to deposit it and then getting charged because it is a fake. Also, good work on your sister's part for doing that research into the TD Bank. Did you end up turning the check into the AG's office?

I can't believe the director of the college told you to put that credit card into the lost and found box! My husband and I have returned a bank card to a bank (slid it under the door) when we saw someone had accidentally left it in the ATM. 😳 Can you imagine?

I turned that check into as many offices as i could think of.