Last week the boys and I took Friday off, and traveled to Branson, Missouri. We didn't have a vacation this summer because of Travis' art residency and my surgery, recovery, and Aspirin Desensitization. It was good to get away.

Our garden is putting out more produce than we have time to process. Travis and I processed acorn squash, squash seeds, tomatoes, and cucumbers before we left. Then we had and have to process more once we got home! Yep during the time we were gone a few tomatoes juiced, and fruit flies occurred. Boo!

We have lots of cabbage, Spaghetti Squash, and kale as well. The Spaghetti Squash and cabbage I use in dishes. The kale we steam for breakfast. We're getting to the point where kale will be washed, dried, and ground for winter smoothies.

Travis picks tomatoes. I line the red ones up in 1 window, the 1/2 red ones in another window, and the green ones in yet another window. I rotate them. Once I have about a gallon of tomatoes I boil them, give them an ice bath, peel them, and deseed them. I make the boys help. Isaak's always been a pretty good helper. Mica on the other hand...well we struggle.

Travis pours the extra tomato juice in ice cube trays for vegetable juice. Once we have quite a few gallon bags of tomatoes we can them. We usually just can jars of tomatoes. Then we can use them for whatever recipe we want to down the road. 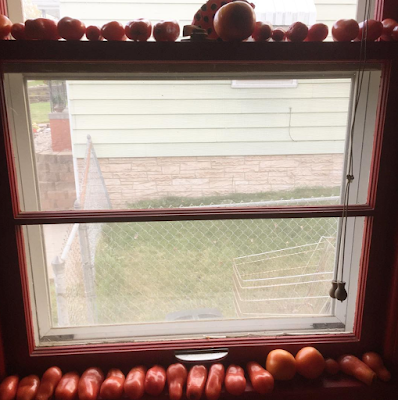 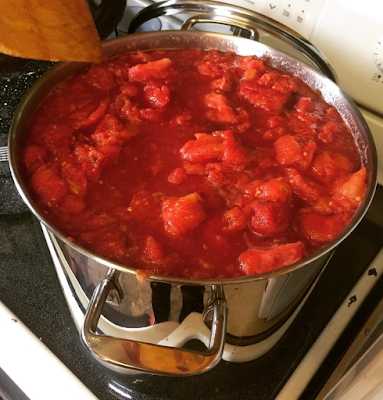 I've been making Sun Dried Tomatoes with the Cherry Tomatoes.

Sun Dried Tomatoes are Really Easy to Make:
Storing Them:

I just put them in a closed container in the refrigerator. I know people store them in oil to.

We use them in eggs, on cheese toast (melt the cheese over them), and on salads. 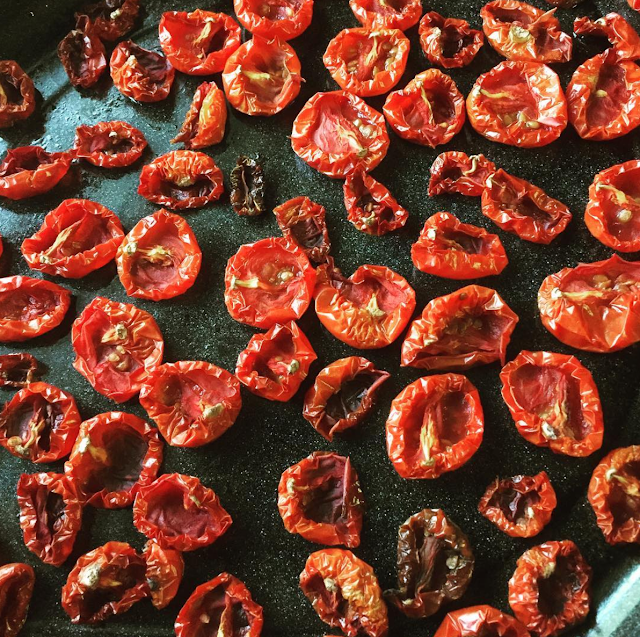 I think I'm finally caught up on reviews. I got a ton of products to review all at once it seemed. The reviews were all due when, or right after I got back from vacation. Some of them I cut pretty close to their deadlines. That's not like me.

This weekend it's time to can relish. I want to try cinnamon pickles. We have lots of dill, and bread and butter pickles.

What would you make with lots of tomatoes and Cucumbers?
Posted by An Apel a Day at 11:15 AM

I am so jealous of your tomato bounty. My crop failed this year, simply because I think some fat critter pounced on the stems when they were wee little things, crushing most of them. They never recovered :( My peppers too. I only got a handful off those plants. My herbs did exceptionally well though.

I have never done sun dried tomatoes, but yours do look tasty!

Theresa that sucks that your tomatoes and peppers haven't done well. My husband does most of the work with growing things.

wow I love how you have your own garden to pick fresh vegs off.. even if I had the space for one here in Singapore, I don't think my fingers are green enough! :p

Never knew sun-dried tomatoes were so easy to make. I will try them one day..

Those dried tomatoes look good. We don't have a yard anymore, we're living in a gated community (apartment building). I have a love/hate relationship with no yard. I miss growing things in my yard (especially flowers) but I don't miss the work (at all!).

Gardens are a lot of work. I still have some dried tomatoes from last year. I canned the tomatoes I got this year. My garden was more flop than not this summer though.

I love sun dried tomatoes! It tastes good with almost everything..I put them in all soup I eat :)