Isaak's elementary school had a really fun holiday program this year called Freeze Frame. I think I enjoyed it so much because Isaak was in it so much.

He's in strings this year:

I think he was thinking, Mom why do you have to take a photo of me? 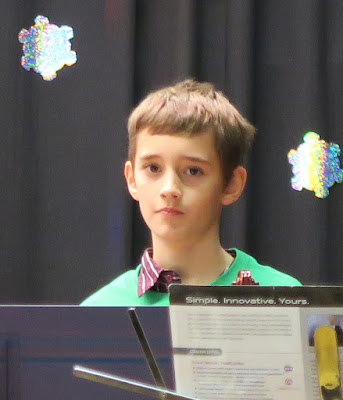 It slightly cracks me up that Mica and Isaak are some of the tallest kids in their grades, and their best friends are the shortest. 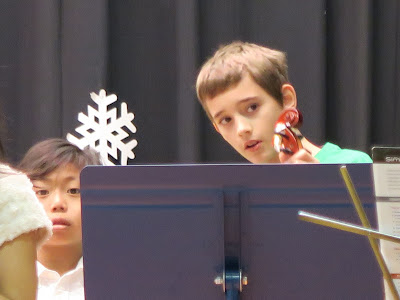 He's not a master of the violin, but for starters he plays really well. Their whole class is ahead of where classes usually are.

Isaak likes to play. He practices songs beyond where they are at. He tells me the hard thing is to stay with the others. During the concert his teacher played the piano to get them to stay together. 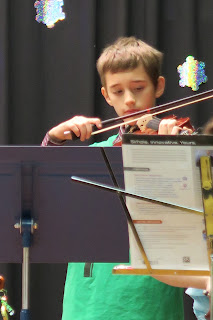 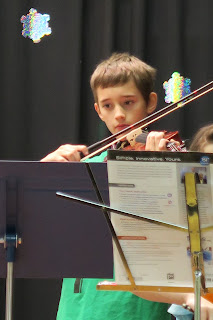 Isaak tried out for  Show Choir, and got into that:

As his teacher puts it, they are just starting. Their Show Choir consists of 4th and 5th graders. Show Choir usually doesn't start until 7th grade in many schools. They do minimal actions.

After a few months, Isaak still loves to go to Show Choir in the mornings! He got really bummed once when he and Dad forgot about it.

Little man was sort of stressed out because he had Strings, then Show Choir right away. He had to hurry to take away his music stand. He wanted to wear his dress up shirt for Strings, but decided it was too much, too fast to have to put his Show Choir shirt on between them. He just left it on.

Some of the songs were from The Beach Boys. Isaak wanted to hear them on YouTube. He said, "Why are all their songs about surfing and the beach?" I laughed and said, "Well they are called The BEACH Boys." He said, "Oh."

I of course recorded everything, but the last section of song. That was the best part. Oh well. 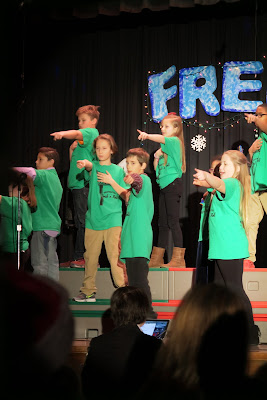 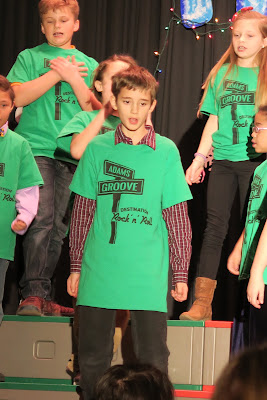 He also sang two songs with his class: 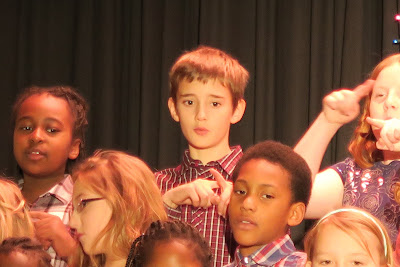 The next photo cracks me up! It's Isaak telling the other kids to be quiet! It wasn't time for talking! He's great at standing up for himself, his friends, the rules, fairness and what's morally right. Bossy to some, but to me I wish I had a little more of him in myself. 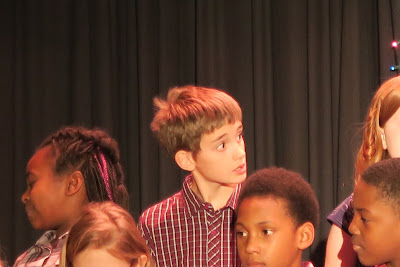 Most years my Mom leans into me and says, "Now why can they sing about Hanukkah, but not Christmas?" Well they did sing about Christmas, just not Jesus. Nor did they sing about God, Mohamed, or any other spiritual leader. I had to point that out to her.

Just like some get hung up on weather one should say Merry Christmas instead of Happy Holidays, there's people that get hung up on if kids doing The Pledge of Allegiance in school, and what's sung in holiday programs. I have people in my life that are really religious and people that are not religious at all. Whatever is fine by me. I error on the side of schools not getting into religion; as they are state funded. If they do, they should talk about many religions. Not just Christianity. If you want a religious base go to worship somewhere, put your kids in a private school, or homeschool them.  What are your thoughts on this? I have people I love on different sides, so I'm not here to judge your thoughts. It's an interesting conversation.

Did you go to any holiday programs this year?
Posted by An Apel a Day at 10:06 AM

I totally agree with you. If you are going to talk about religion in school, it should be about all religions … unless the kid is in private/homeschool. How awesome that Isaak is doing so much with music. Wonder if he will take that route as an adult? I feel like your family is heavy into the arts. :)

He did great in the performances! I could tell what they were playing with the violins. Our concert I had no idea what the kids were playing but clapped anyways lol.

living down here, it was nice that my parents were able to go to broxton's school play. they did a christmas musical with an elf named elfis... like elvis ;)
it was cute.