We got Mica into surgery as soon as possible after we learned that he had a Unilateral Inguinal Hernia without obstruction or gangrene.

A) We wanted him in because I had already hit my deductible. Might as well add to hit the family one. Yikes!

B) We didn't want obstruction or gangrene to happen.

C) It wasn't going to go away on its own. He had it at least a few years.

D) He'd have some recovery time before school started back up.

Travis took the boys to the doctor, and the pre-op appointment. I love the boy's doctor, but I am annoyed that he didn't look into there being a hernia before at his last appointment. At least we caught it before obstruction or gangrene happened!

I took much of Friday off to be with Mica for surgery.

The boys used to beg me to go to Children's Hospital. It was a big deal when we went. I never would let them go because I sure as heck didn't want them to pick up anything at the hospital. We really only went when one our our own kids had to go, or when my nephew Emerson was in the hospital.

Mica's sure showing his age because he wasn't stoked about the lobby of the hospital like he always was before. They even had a party going on with snacks and costumes, and Mica wanted nothing to do with it.

We had to be there 2 hours before the surgery time.

He didn't complain about being hungry at all. Surgery was at 1:30, and he hadn't had anything to eat, since 6:30 the night before.

The most pain he had was the IV being poked into him.

He laid there reading a book called Ugly, which is kind of like Wonder only less emotional (according to Mica). 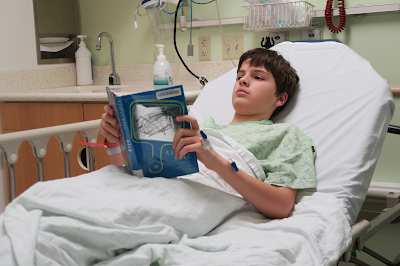 I didn't see him for a little over an hour.

The nurses were cracking up over the stuff the was saying!

He was freaking out about not having boxers or pants on.

He kept covering up his head to look at his incision; even thought it was covered up.

He went to the bathroom, but came back apologizing to the nurses and me because he forgot he was supposed to sit, and not stand to pee.

Then when he was handed his bear, which they give everyone he named him, "Hernia Man". He said he had to name him that because Isaak got one and named him, "Stitches" when he was younger. I'm just glad he didn't name him "Nut Job" because that's what Mica and Travis kept inappropriately calling his procedure. 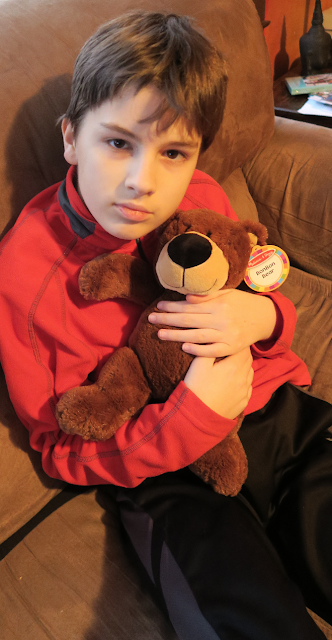 We got home safe and sound. Mica asked if he could take his hospital band off. I messed with him and said, "No! You have to leave that on until you're all better. That's how they track you!" I think he believed me for a minute.

He's done really well! Kind of looked peeked. No fever, rashes, and just a little muscle pain. I only had to give him 1 big pain pill. His surgery strips fell off. He kind of panicked with that. I told him that the nurse said that may happen.

He only has to miss 2 weeks of activity. That's 1 week of gym participation.

I followed along on FB and glad it all went off ok :) I was thinking about you.....

And for me, I had my gallbladder out when I was 18 and a c-section with Nathan!

Glad all went well! Nice to have it behind him.

I am so glad all is well. I know you had a lot of procedures done as well and now it's Mica. Wishing you all well and speedy recovery

I'm glad the operation was a success and he won't have a lot of down time. His bear is cute and I love the name.

I had my gallbladder out at 24. I sometimes wonder if that contributed to my autoimmune disorder (I read that people with their gallbladders removed have a higher risk of developing Crone's and Ulcerative Colitis). I do have polyps removed every year from my intestinal tract, but that doesn't require any cutting.

i have had tubes in my ears many times... a cyst removed when i was in my early 20's
then my 2 c-sections... and then that big surgery for my ear.
i think that is it.