We turned Phoenix into a giant game board with this fun scavenger hunt adventure.

Combine the excitement of the Amazing Race with a three-hour city tour. Guided from any smart phone, teams make their way among well known and overlooked gems of the city, solving clues and completing challenges while learning local history.

Our Urban Adventure Quest was easy to set up! I had Travis set it up, while I did dishes. Win, Win! He had no problems. They did mention to print out the form at the end of signing up. The house we were staying in had a printer, but needed a wifi password, which the owners didn't know what it was. They must just have their phones connected to it. Travis took a screen shot to take it with us.

Some Things to Have Handy:
A Sculpture Holding Isaak's Water Bottle: 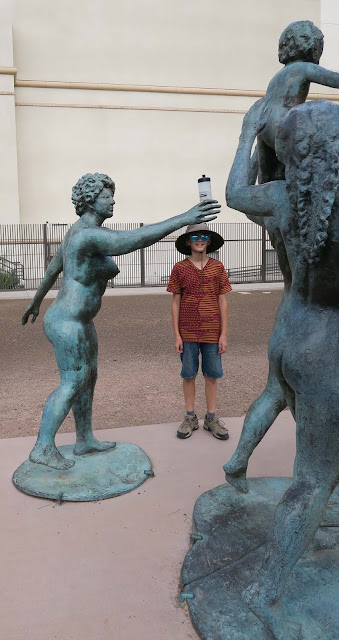 It sounded pretty exciting to me!

I loved that we could do something on our trip that was fun and I got for free with blogging. Every Easter the Easter Bunny does a Scavenger Hunt for the boys. I knew the boys would like looking for the answers to the clues.

Mica got into it more than Isaak, so I'd say it's best for ages 13 and up. 10 is a little young to get the answers to the clues. That's not to say Isaak didn't enjoy it. He liked looking at all the sculptures and buildings. 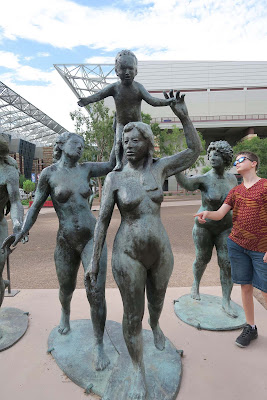 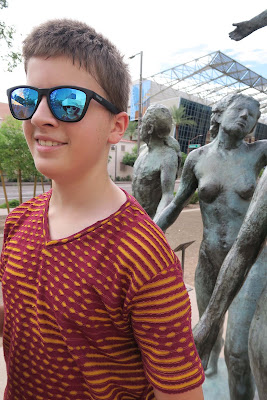 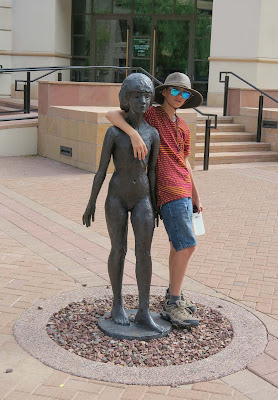 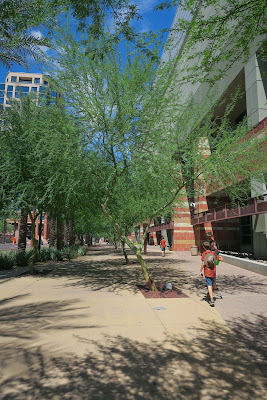 It seemed like Mica and Travis were the masterminds behind figuring out the answers to the clues. Isaak and I were always behind mentally and walking wise. LOL! I typically am behind because I'm always taking photos. Travis took the clues very seriously. I was like, "Forget about the direction, let's just walk around the building." Then we'd find it. I was of some use. 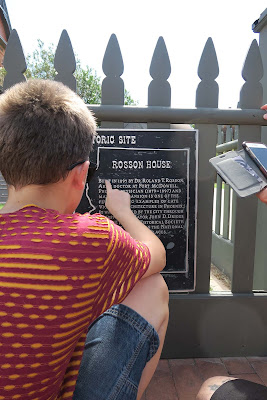 Travis was very impressed with Phoenix's public art! They have way more than Omaha does. It's much more open as far as nudity goes. This adventure took us through a lot of public art, which was cool! 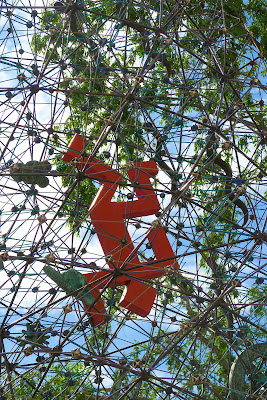 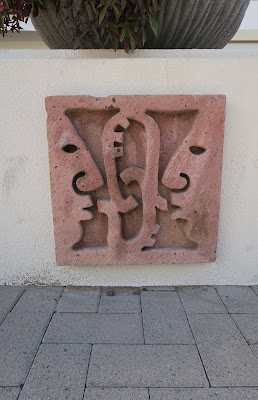 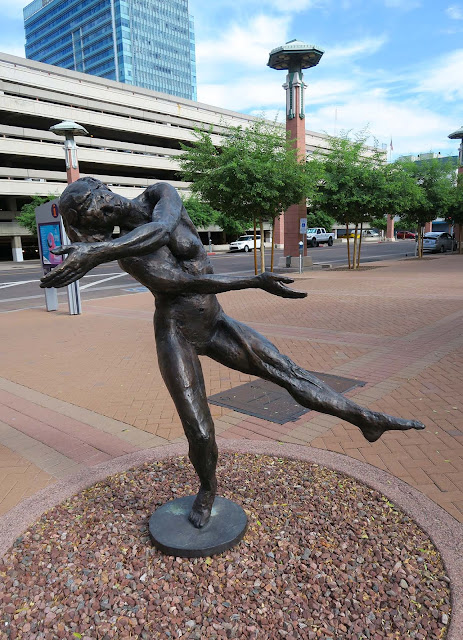 Mica gets into architecture. He liked seeing the big buildings. 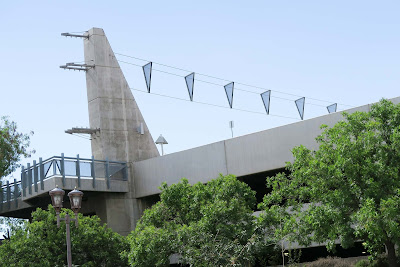 We did learn a lot on this Urban Adventure Quest! 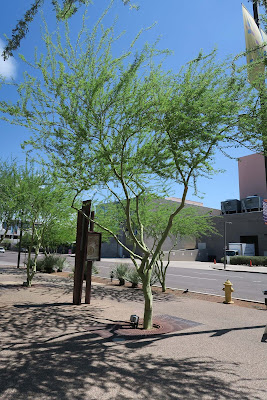 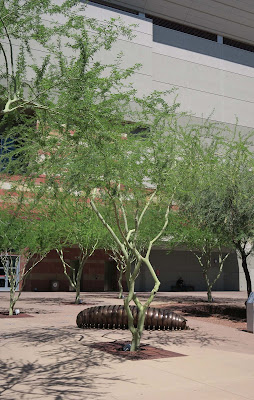 
One of the Clues Lead Us to Otterness' Bugs: 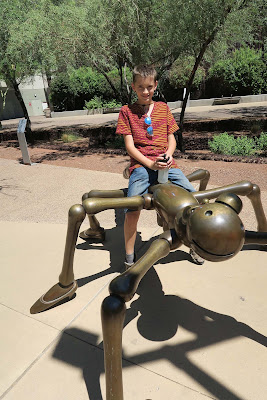 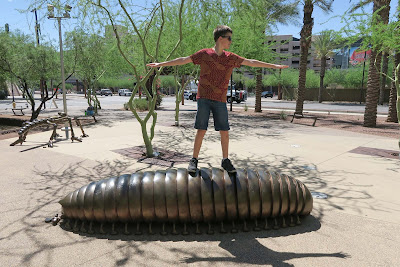 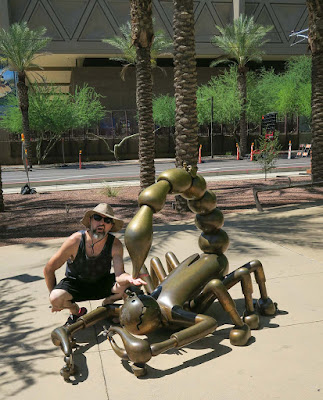 They are pretty fun, but HOT! 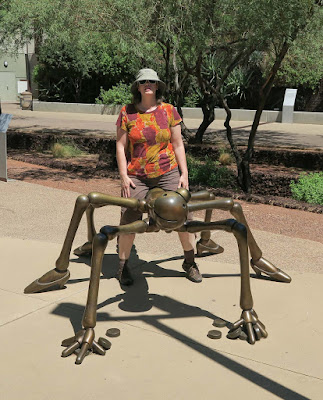 We Had a Some Hiccups Along the Way:

Remember that Mica had hives? Well he didn't have them that day, but he was given his last dose of Benadryl that morning. Benadryl + A Person = A Sleepy Person. We had to keep our vacation going.

We tried to get going in the morning, but it was vacation. It took awhile to get into the city on a weekday. Phoenix is HUGE. It wasn't nearly as bad traffic wise as we thought, but we didn't get started on our adventure until 9. I know Travis would have liked to of started at 7.

Considering it was 108 degrees, Monsoon Season, and there was a air pollution alert the degree of how comfortable we were wasn't as good as we would have liked. Again we should have started earlier!

They said it would take 3 hours. We must be slow. Maybe it was the 108 degrees. It took us way longer than 3 hours, and we still didn't finish.

We took a break for lunch, came back to finish, and the game seemed off. We'd answer, it would say we had the wrong answer, but it was the right answer. After a few of those we decided to stop. We didn't have that much more to go, but we weren't going to keep going if it was glitching.

This is Where We Started to Type in Correct Answers, but it Kept Saying We Were Wrong. I'm thinking it did this because of our extended lunch break. 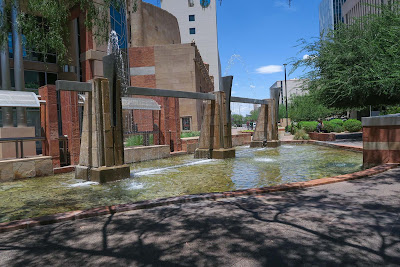 We're not quite sure what happens in the end of the Urban Adventure Quest. It still was fun! You can play anytime during daylight hours. Start when you want and play at your pace. 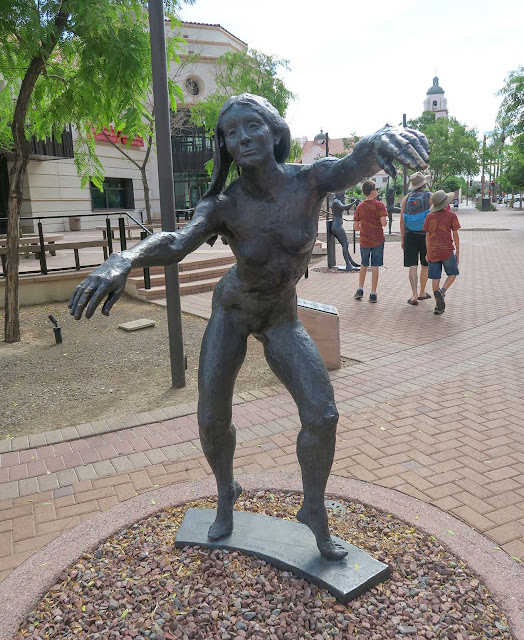 Great Family Fun! Save 20%- Only $39.20 for a team of 2-5 people Promotion Code: FGBLOG. Sign up online at www.UrbanAdventureQuest.com.

Disclaimer: There will be a follow up review for Urban Adventure Quest! This is a sponsored post.
Posted by An Apel a Day at 12:32 PM

Too bad about the glitchy ending, but it does sound like a great way for a family to spend the day together!

Sorry to hear you had a sleepy one with you. I think this kind of quest is a perfect family activity!! Happy to get an inside look at what it's really like.