I Hope You All Had a Wonderful Christmas!

Isaak had his holiday shows on Friday of last week. He was in a lot, so he was a big part of it. I'll post a picture or two later. We went to see him in the morning, and they presented again in the afternoon.

I took the day off to get a few last minute things, and wrap Santa gifts. It worked out well.

Before Isaak went to school he was a tad bit warm, but had no fever. I knew he worked his ass singing and violin playing self off for the day, and didn't want to miss it. Plus Isaak had this thing about missing school anyhow. He wants a perfect record. Since he didn't have a fever we decided to send him. We did call school, and had him skip safety patrol in the morning. It allowed him to sleep in a bit, and not be in the cold.

We went to pick him up at the end of the afternoon performance, he was crying, had a fever, didn't have his instrument picked up, and just stood up on stage for all the performance without participating. I told him to have the school call us if he got sicker. He didn't.

After we found his violin and music stand he came home. 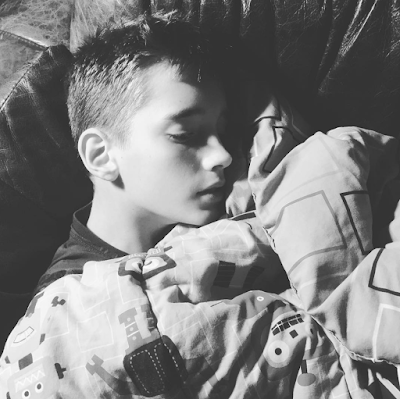 He was sick all weekend. Finally on Christmas Eve Day he was better. We called the doctor's office a few times because he had a cold for 2 weeks prior to the fever bug. They were so swamped on Friday and Saturday that they couldn't see him. My mom was worried about him getting the Polio like virus called: Acute Flaccid Myelitis (AFM). My mom had Polio 2 years before the vaccine came out. She's probably really tuned into the virus because they've been talking about it a lot on the news.

Go to find out many kids got sent home with a fever that Friday at school. He still has a lingering cough, but is fine. I did get slightly freaked out when he went on about how much his legs hurt. He was limping around.

We were able to have a good Christmas! Everyone got cool things. I picked Travis up some stuff after Christmas because he looked disappointed. Hey he'll like what I got! What's something that you got for Christmas?
Posted by An Apel a Day at 4:21 PM

Jason and I buy our own gifts and have the girls wrap them, so while we aren't surprised on Christmas day, at lease we get what we want lol. Jason did tuck some soup spoons in my stocking because I mentioned I wanted some after we went out to a restaurant last week, so I guess I did get 1 surprise.

I hope your day was relaxing and everyone had a great day there!

@Theresa - I use somethings I win, or review for our presents. I won a rake. Travis wasn't too excited about that one. Then there was a sculpture book they were going to toss here. I said, "Hey Travis will like this." He didn't. I did find a few Alpaca sweaters for him after Christmas that were marked way down. I got his approval first, and got him a cardigan and sweater. I did get him a few things he did like at Christmas. The rake and book didn't go over well. At least they were free.

You should have him make a wish list board on Pinterest for ideas for next year. I make the girls do that. They aren't thrilled with it, but at least it gives us a general idea of what they do want for the holidays.